By Elizabeth Dohms-Harter, Wisconsin Public Radio - May 14th, 2021 10:44 am
Get a daily rundown of the top stories on Urban Milwaukee 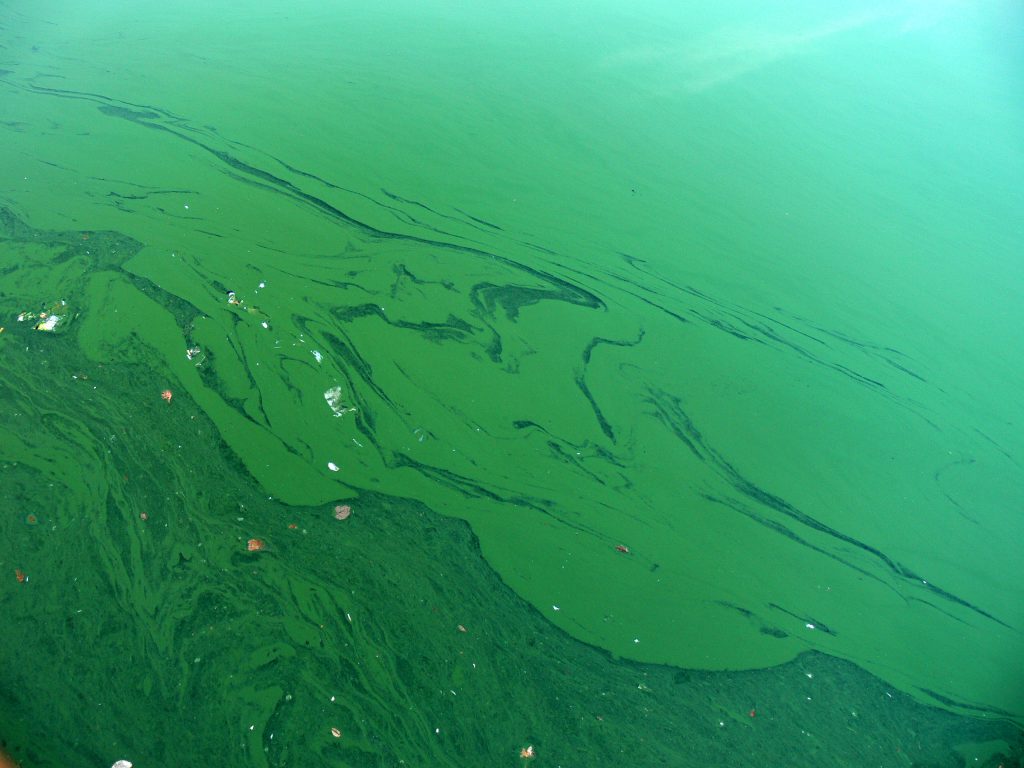 State agencies in Midwestern states including Wisconsin don’t adequately test lakes for cyanobacteria, the blue-green algae that can be toxic to humans and wildlife, an analysis by the Environmental Working Group found.

Similar to algae, cyanobacteria are typically green and microscopic and can photosynthesize. But they are, in fact, bacteria, and at high concentrations can produce cyanotoxins that can harm organs and cause gastrointestinal upset, headaches, fevers and rashes.

The report relied on data showing that 20 lakes were tested through the Wisconsin Harmful Algal Bloom Program from 2010 to 2014 and 2018 to 2020. Testing through this program occurs when a human or animal gets sick and the suspected cause is cyanotoxins.

“That’s a lot of what this report was getting at, was trying to understand when and where these toxins are produced and … when we might need to have some concern about being in those water bodies,” said Grace Wilkinson, an assistant professor at the University of Wisconsin-Madison Center for Limnology.

Wilkinson appreciated that the report highlighted areas of concern, but noted limitations of keeping track of cyanobacteria in all of Wisconsin’s 15,000 lakes. She said because not all of the lakes will be used for recreation such as fishing and swimming, it probably isn’t the best use of resources to test those bodies of water.

Additionally, she said not all of those bodies of water will have high nutrients at the levels that would be needed to foster a thriving environment for cyanotoxins.

“While the report pointed out the need for more data information, I want to make sure that we’re careful about thinking … what’s the best time and money spent by state or local government agencies to try to get a handle or an understanding about whether or not cyanotoxins are a threat in those water bodies,” she said.

Cyanobacteria are natural, and found in nearly every ecosystem across the globe, Wilkinson said. But they become problematic in high concentrations. There are a host of different kinds of cyanotoxins, but one of the more common ones found in freshwater are microcystin.

High concentrations of nutrients, specifically phosphorous, and warm lakes are prime conditions for thriving cyanotoxins. That phosphorous gets into lakes largely via the watershed — the land surrounding the lake that drains into the body of water. Some contributors of this pollution are agricultural activities, livestock manure and urban human waste.

Wilkinson mentioned that one major problem with algal blooms is that once nutrients get into the lake, they tend to sink into the sediment and stay there. They can be released slowly over time.

“It’s this legacy of nutrients that have been added to the lake for even previous decades that could be feeling the algal blooms in part that we’re seeing today,” she said. “Even if we stopped adding nutrients now, and we didn’t have any runoff from our watersheds, there’s essentially this ticking time bomb of nutrients in the sediments or the bottom of a lot of our lakes that are going to keep fueling these algal blooms.”

Wilkinson said when you’re out near lakes this summer, pay attention to what the water looks like. Is there a lot of green scum on the water? Does it look like pea soup or paint on the water? If so, keep your pets, children and yourself away from it, she said. Also keep your distance from dried up algae on the beach.

When it comes to eating fish from lakes where cyanotoxins are present, there’s better news, Wilkinson said. Research has shown that the toxins end up mostly in parts of the fish that we don’t eat. Some show up in the muscle that we do eat, but it’s generally in very low concentrations.