Full agenda on Tuesday of mostly partisan legislation, much of it heading for governor’s veto.

By Shawn Johnson and Laurel White, Wisconsin Public Radio - May 12th, 2021 10:29 am
Get a daily rundown of the top stories on Urban Milwaukee 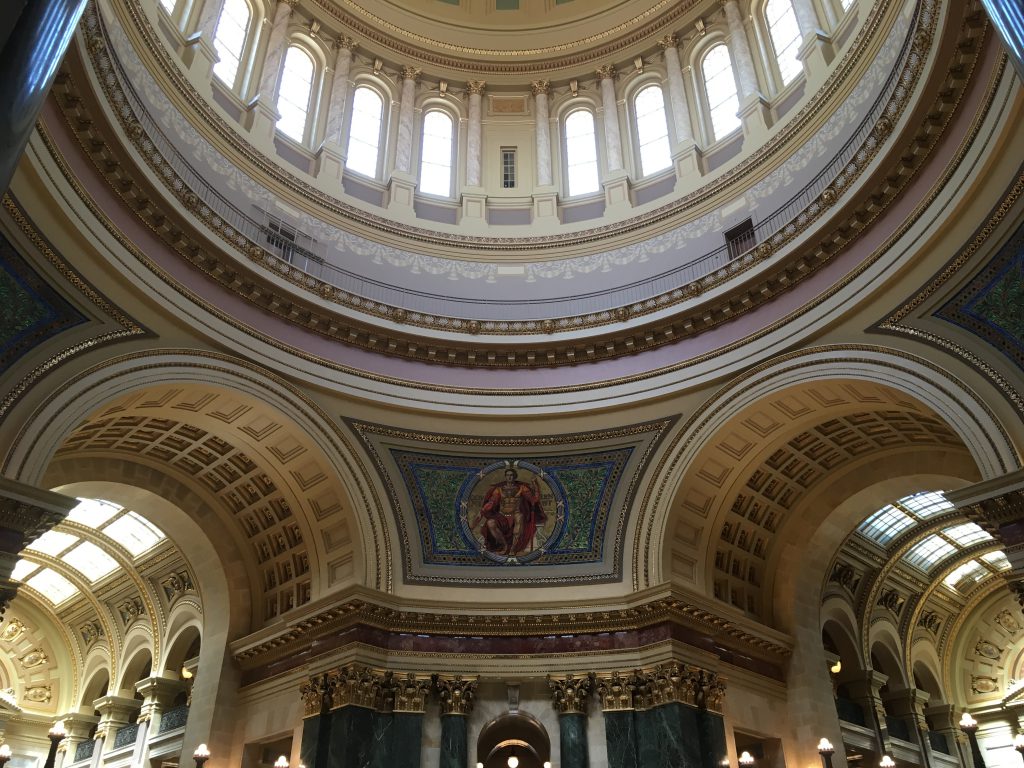 Republican state lawmakers took up a number of high-profile bills Tuesday, including a handful of election bills likely headed for vetoes by Gov. Tony Evers.

Legislators also approved a resolution supporting a “convention of states” to amend the U.S. Constitution and took the first votes on a package of policing bills. They also advanced a requirement that the national anthem be played at some Wisconsin’s sports stadiums.

Here’s a rundown of some of the highlights from Tuesday’s agenda:

Assembly Republicans voted Tuesday to approve a contentious bill that would restrict future private election grants like the ones many Wisconsin communities received to help administer the 2020 election. The bill passed 60-36, with Republicans voting in favor and Democrats against.

The move is part of an initiative by Republicans in both Wisconsin and in other states to push back on grants funded by Facebook CEO Mark Zuckerberg.

Zuckerberg and his wife, Priscilla Chan, started a group called the Center for Tech and Civic Life in 2020 to help communities run elections during the coronavirus pandemic. The group said it awarded private grants to 221 counties, cities, towns and villages in Wisconsin. The bulk of the funding — more than $6 million — went to Milwaukee, Madison, Green Bay, Kenosha and Racine, Wisconsin’s largest cities.

Groups with Republican ties filed lawsuits last year challenging the grants in state court and in federal court. The courts rejected both cases.

Under the proposal, the state would dramatically restrict future election grants, requiring them to be awarded to all communities based on a per capita basis and be approved by the Republican-controlled Joint Finance Committee first. The plan would also ban grants that include requirements about how to run an election. The Center for Tech and Civic Life grants had certain requirements on how the election should operate.

Republicans contend the plan would prevent groups like Zuckerberg’s from having undo influence over future elections.

During debate, state Rep. Adam Neylon, R-Pewaukee, who sponsored the proposal, argued restricting the grants is “not just about voter fraud, this is about the integrity of our election.”

Democrats argued the plan is one of many ways the GOP is perpetuating the lie that the 2020 presidential election was “stolen.”

“This isn’t a serious proposal based on facts, it’s a conspiracy theory given statutory form,” said Rep. Mark Spreitzer, D-Beloit.

A similar version of the bill has already passed the state Senate, but because the proposals are not identical, the measure does not yet move to Evers for his signature.

One of the plans passed on a party-line vote Tuesday would ban absentee ballot collection events like the “Democracy In The Park” drives the Madison city clerk held during the 2020 election unless they’re held within 14 days of the election and “as near as practicable” to the clerk’s office. They’d also need to be run by the clerk or their staff.

“There was a loophole that was utilized for ‘Democracy in the Park,’ and this cleans that up,” said state Sen. Duey Stroebel, R-Saukville.

Democrats opposed the bill, calling it another case of Republicans trying to make it harder for people to vote.

“I think it’s actually kind of glorious to see people gathering and dropping off their ballot,” said Sen. Jon Erpenbach, D-West Point. “It’s a celebration. That’s how we should be looking at this. Not a way to try and figure out how do we cut that down.”

That same plan would also let for-profit companies like UPS and FedEx deliver absentee ballots instead of just the U.S. Postal Service.

Another proposal that passed the Senate would ban municipal clerks from filling in missing information for an absentee ballot witness, something clerks are instructed to do right now. That measure passed 20-13 with Sen. Roger Roth, R-Appleton, joining Democrats in opposing the plan.

Senators also passed a bill on a voice vote that would require municipalities that broadcast or livestream canvassing proceedings for any election to record the broadcasts and keep the recordings for almost two years.

The Assembly also took up legislation that would spell out requirements for posting Wisconsin Elections Commission minutes online. The bill passed on a voice vote. It has already passed the Senate.

Assembly Republicans also scheduled votes Tuesday to override two Evers vetoes, one for a bill that would ban vaccine mandates by the government and another that would ban the state from closing places of worship.

Evers rejected both plans last month, writing in his veto messages that he opposed taking away existing tools from state and local public health officers to deal with COVID-19.

However, Assembly Speaker Robin Vos, R-Rochester, told the Associated Press that lawmakers would not attempt the veto override Tuesday after all.

It takes a two-thirds vote in each chamber of the Legislature to override a governor’s veto, meaning 66 votes in the Assembly. The vaccine bill received 60 votes and the places of worship bill received 61 votes when they passed, both shy of the two-thirds threshold.

While Evers vetoed the bill on vaccine mandates, he also told The Journal Times of Racine that a requirement for all Wisconsinites to get vaccinated against COVID-19 is “not going to happen.”

GOP lawmakers voted to approve a resolution that would add Wisconsin to the list of states supporting a “convention of states” to amend the U.S. Constitution. It’s similar to one Wisconsin Republicans passed almost four years ago. The resolution passed 58-36, with most Republicans voting in favor and most Democrats against.

While the process has never been used, the U.S. Constitution gives states the power to petition for what’s commonly referred to as an “Article V Convention” to offer amendments. The convention is called once two-thirds of all state Legislatures — or 34 of them — have signed on to a petition.

The latest resolution would call for a convention to consider amendments that would “impose fiscal restraints” and “limit the power and jurisdiction” of the federal government. It would also let the convention consider term limits for members of Congress.

During debate, Republicans argued states need to step up to push those changes.

“If Congress can’t be fiscally responsible, then states like Wisconsin should take charge and need to take charge of our own destiny,” said Rep. Rick Gundrum, R-Slinger.

While GOP backers say the plan would address runaway spending in the federal government, critics of the move say it could amount to a Pandora’s box, setting up a convention where any number of other issues could be considered.

But the debate underscored the ongoing differences between Republicans and Democrats when it comes to changing how police are regulated.

Most Democrats voted against the plan, arguing it gave police more power to regulate their own behavior.

“We’re going to give them one more avenue of leverage over regular residents by putting them on a citizen-led board to make decisions in response to the police department,” said Sen. LaTonya Johnson, D-Milwaukee. “The citizens didn’t ask for this.”

But Sen. Lena Taylor, D-Milwaukee, who helped write the bills, pushed back.

“This is not police-heavy,” Taylor said.

Taylor, who cosponsored the plans with Sen. Van Wanggaard, R-Racine, described them as a product of compromise that would make the system better.

“We took folks who want no police to police who are at the other extreme, and we came up with stuff that make up this fire and police commission bill,” Taylor said.

The bill on police and fire commissions passed on a 22-11 vote with Taylor the lone Democrat to join Republicans.

Other policing bills up for votes in the Senate passed either unanimously or on voice votes. They included plans to create a $600,000 grant program for community-based policing in large cities, require police to post their use-of-force policies online, and require the state to gather more data on use-of-force incidents and force police to share personnel files with other agencies during hiring processes.

The bills are not scheduled for a vote in the Assembly.

GOP lawmakers have also scheduled debate on a wide variety of other issues Tuesday. They include bills that would: