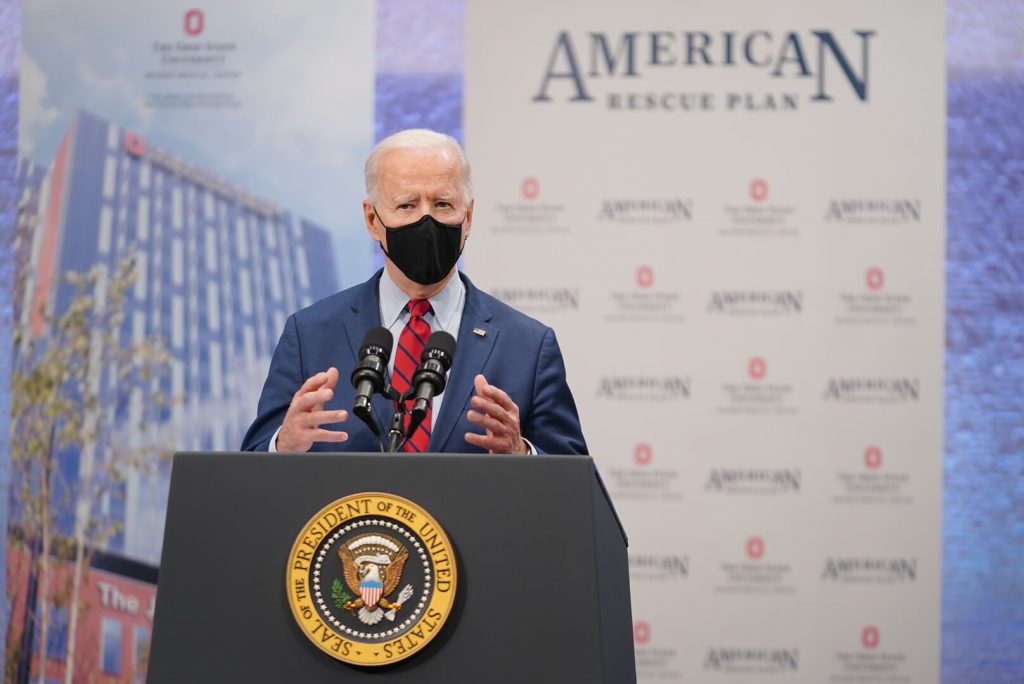 States, cities and counties can begin to tap their share of the $350 billion in federal funds intended to spur a national recovery from the economic toll of the COVID-19 pandemic, White House officials announced Monday.

The Biden administration said the much-anticipated money, which was included in the massive relief law enacted earlier this year, can aid governments of all sizes in paying for a wide range of costs related to the pandemic response. The funds will boost the budgets of not just states but thousands of U.S. cities and counties — unlike the first pandemic relief bill passed in 2020, which gave money to only states and larger local governments.

The uses for it could include running vaccination clinics and buying personal protective equipment; paying the salaries of government employees involved in battling COVID-19; or helping speed the recovery of industries, like hospitality, that have been devastated during the past year.

Guidance issued Monday by the U.S. Treasury details a list of specific ways that states and local governments can use the money — and some ways they cannot, like using it to offset new tax cuts. States and localities will have even more flexibility for using any dollars deemed to be replacing revenue lost last year.

In Wisconsin, Gov. Tony Evers has been awaiting the guidelines as the Republicans in the Legislature have pushed a series of bills attempting to wrest control of the money and dictate how it will be spent, a power that falls to the governor. Evers has been responding that he is awaiting federal guidelines to be certain all spending meets the standards. Republican leaders have also sent letters pressing him for answers on his plan early in the budget deliberations, causing Democrats to suspect they want to replace ongoing budgetary expenses, such as education aid, with one-time federal money.

“If they were really, truly sincere about the federal money they wouldn’t have introduced legislation spending it all already,” Sen. Jon Erpenbach (D-West Point) said regarding their plans that probably ran afoul of federal law and were vetoed by Evers. “What people need to understand is one pot of money has absolutely nothing to do with the other. This is one-time funding from the federal government to help deal with the past year we all went through, versus the state budget for ’21 to ’23,” he explains. “We have to budget with our state budget as the federal money never existed because we’re talking about, for the most part, ongoing programs, K-12 education or the UW System.”

State and local governments carried out the brunt of the nation’s pandemic response, creating new COVID-19 testing and contact tracing programs and launching the largest vaccination campaign in modern history.

They also saw reductions in the tax dollars flowing in, as businesses shuttered, employees were furloughed, and uncertainty loomed about how the crisis would unfold.

Those governments are still down 1.3 million jobs compared to before the pandemic, Gene Sperling, the White House’s coordinator for the pandemic relief plan, told reporters during a briefing call on the state and local aid.

He said not including more help for states and local governments in the 2009 stimulus package amid the Great Recession slowed that recovery. The new aid package is intended to take a different approach, and ensure a more equitable recovery that can begin to address disparities that existed before the pandemic, officials said.

“This is responding to the lessons of the past in a powerful way,” Sperling said. “This is ensuring that those state and local governments are able to not just bounce back, not just build back, but as somebody I know says, build back better and build back quickly.”

The federal dollars can be used to boost state unemployment trust funds back to the level of funding available before the pandemic.

But the money cannot be used in two specific ways: shoring up pension funds, or for spending that would “either directly or indirectly offset a reduction in the net tax revenue” or delay the imposition of any tax or tax increase.

Several Republican-controlled states have criticized that provision as an unprecedented string attached to the federal dollars—and some have filed suit already.

Senior administration officials on Monday’s call defended the prohibition against direct or indirect tax cuts as in line with other federal aid to states, and said that it would help ensure the funding is used for its intended purposes.

An interim final rule on the question was published Monday by the Treasury Department, detailing the reporting framework for how states will be able to show that any tax cuts were paid for using money separate from the federal stimulus dollars.

That could include raising other sources of revenue, cutting spending, or through higher revenue due to economic growth, according to the White House fact sheet.

States and local governments looking to use some dollars to make up for revenue lost last year will need to calculate the size of that projected loss by comparing their actual revenue to either their average annual revenue growth over the prior three years, or by using the national average for that period of 4.1%.

Those losses also can be recalculated later on, to account for delayed economic effects.

Officials have until 2024 to spend the federal aid.

The federal Treasury will distribute the money directly to each state, territorial, metropolitan city, county, and tribal government. Other qualifying local governments will receive their share through their state governments.

Cities and counties will receive their funding in two payments, with half provided within days of accessing the federal portal, and the remainder in one year.

Some states will receive their money in two payments, though some may receive a single payment this year if they have experienced a net increase in the unemployment rate of more than 2 percentage points from February 2020 to the latest available unemployment data.

States that would get a single payment include Colorado, Louisiana, Maryland, Nevada, Pennsylvania and Virginia, based on current state unemployment data.

Here’s how much some large U.S. cities will receive in relief plan funding, out of a $45.6 billion fund for metropolitan cities:

Melanie Conklin contributed to this story, reporting from Wisconsin.