The group and other activists also protested the elimination of tuition aid for immigrant students. 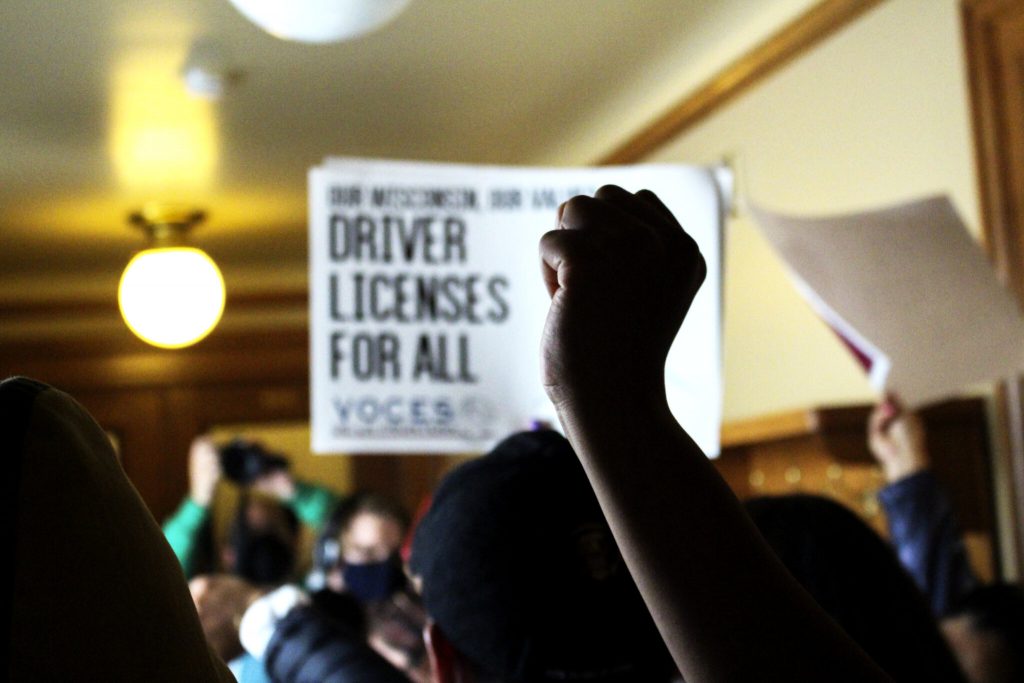 The Wisconsin State Capitol was closed to the public for more than a year due to the COVID-19 pandemic. It only took four days after reopening for Republicans in the Legislature to draw a large group of protesters to the hallway outside the Joint Finance Committee meeting (JFC).

On Wednesday, JFC co-chairs Sen. Howard Marklein (R-Spring Green) and Rep. Mark Born (R-Beaver Dam) released their plan to gut hundreds of items from Gov. Tony Evers’ budget proposal — among them, provisions that would have restored access to driver’s licenses and state IDs for immigrants and provided tuition aid for immigrant students at Wisconsin universities. 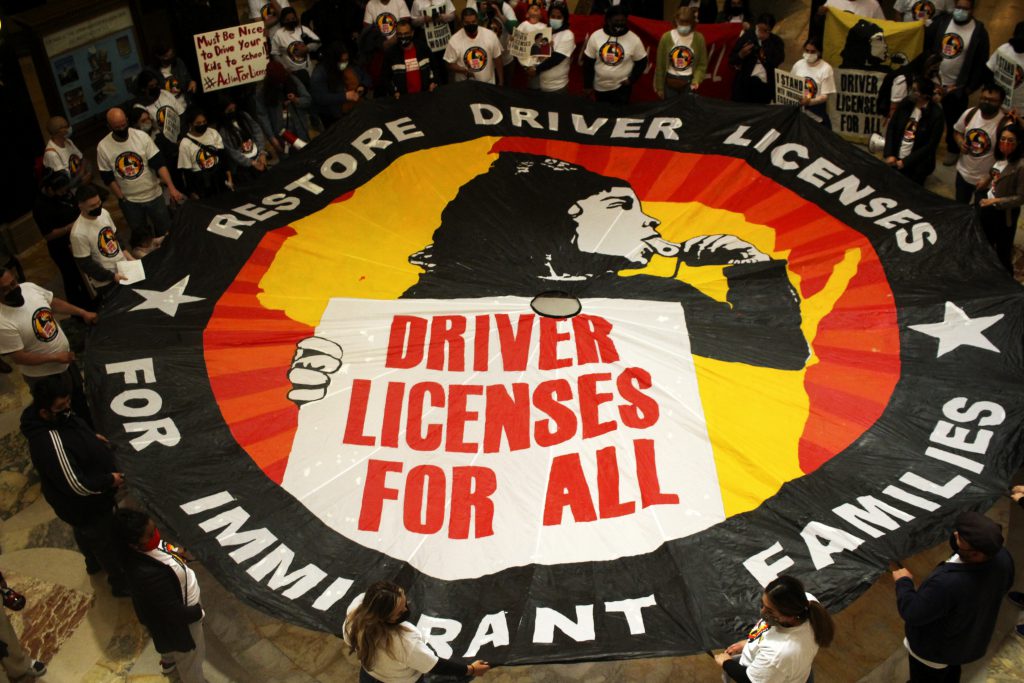 By Thursday morning, protesters organized by Voces de la Frontera, an immigrant rights organization, had descended on the Capitol from across the state to protest the Republicans’ actions.

Dozens of protesters, chanting for justice and holding signs pleading for driver’s licenses, packed the hallway outside the committee meeting. Multiple Democratic legislators and elected officials from Milwaukee, including Milwaukee County Supervisor Ryan Clancy and Reps. Supreme Moore and Sylvia Ortiz-Velez, spoke at the event and criticized the gutting of Evers’ budget.

The initial plan was to stage the protest in the hallway before entering the committee room and attempting to make their case for the policies — an action Voces and its allies have taken in other contentious budget years. But the plan to enter the meeting was stopped after State Capitol Police officers were stationed in front of the door, preventing the protesters from entering. 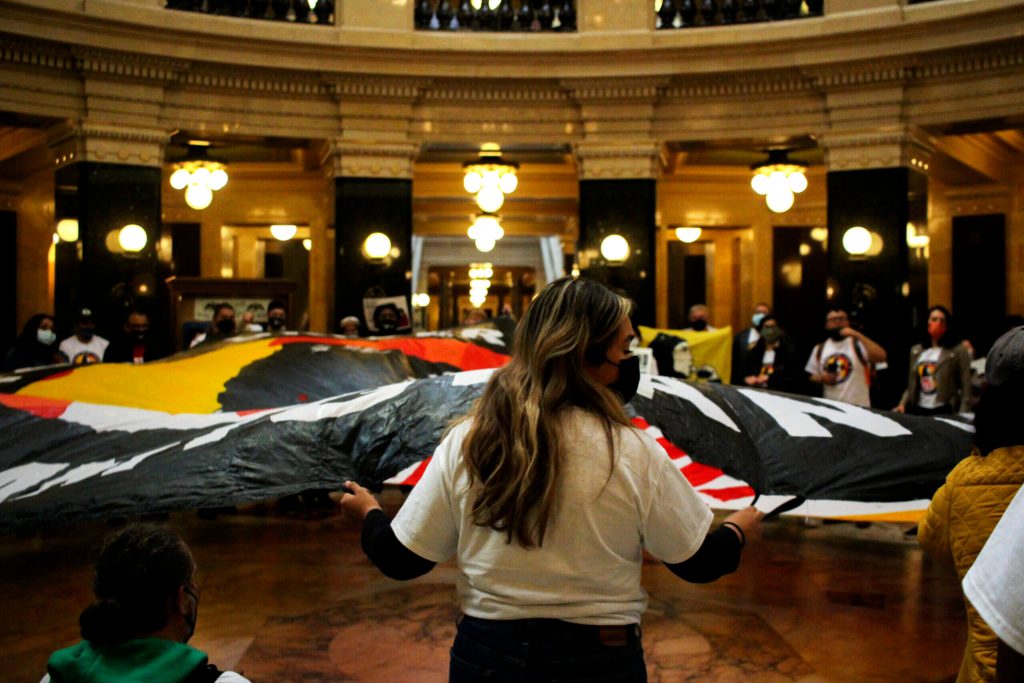 Protesters hammered on the point that Milwaukee residents, including members of the city’s immigrant communities, didn’t get a chance to weigh in on the state budget because, despite complaints, Republicans refused to hold public hearings in major urban areas — instead holding hearings in Rhinelander, Menomonie and Whitewater. Even elected officials, such as Milwaukee County Executive David Crowley and Milwaukee City Council President Cavalier Johnson, were forced to drive nearly four hours to testify at a public hearing on behalf of the state’s largest city.

Because public hearings weren’t held in the cities where most of Wisconsin’s immigrants live, the protesters said they saw Thursday as their chance to weigh in on the policies in the budget that have the most direct impact on their lives.

Voces members emphasized that immigrants are essential workers who have been hard hit by the pandemic, and that their labor is a critical part of the state economy.

Protesters made their case for reversing a 2007 law that bars undocumented immigrants from obtaining driver’s licenses and for appropriating money to help immigrants pay for college as they stood in the hallway outside the hearing room.

“There was a time in Wisconsin when we could have driver’s licenses, but that was taken away from us in 2007,” Voces member Eduardo Perea said in a statement. “Not having a driver’s license makes it extremely hard for us to do our jobs and our daily routines like taking our kids to school or going to the store. We face discrimination when we are looking for jobs, and fear deportation when we are just trying to do our jobs. We are asking for the opportunity to continue doing the jobs we already do, but safer and better.” 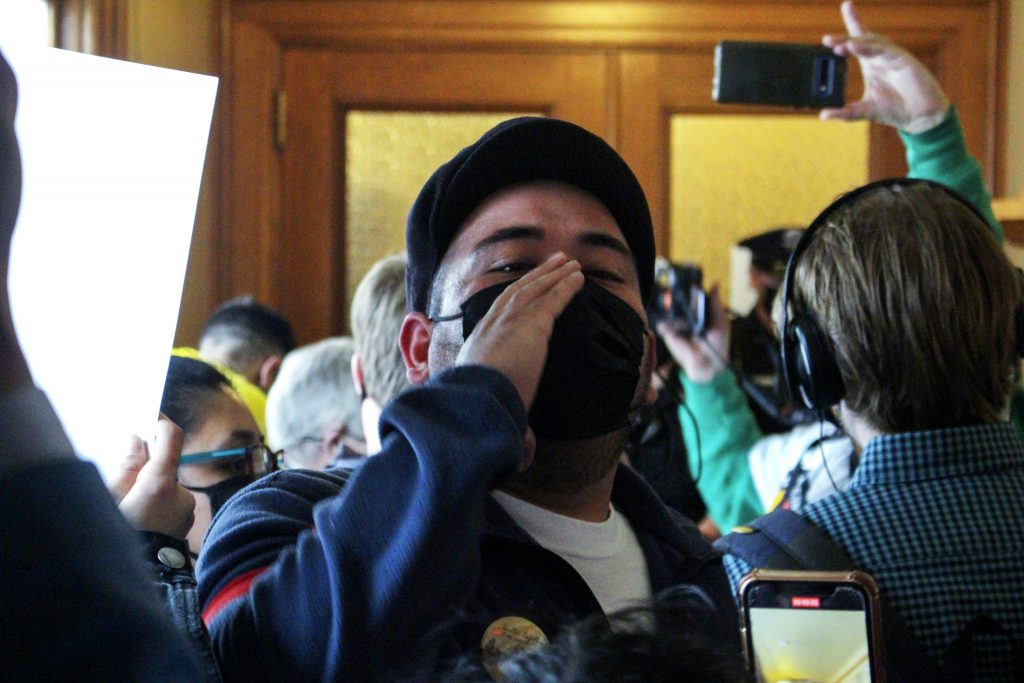 A protester leads a chant against removing pro-immigrant measures from the state budget. Photo by Henry Redman/Wisconsin Examiner.