A History of Wisconsin’s LGBTQ Community

New book chronicles recent LGBTQ history from the 1960's to the present. 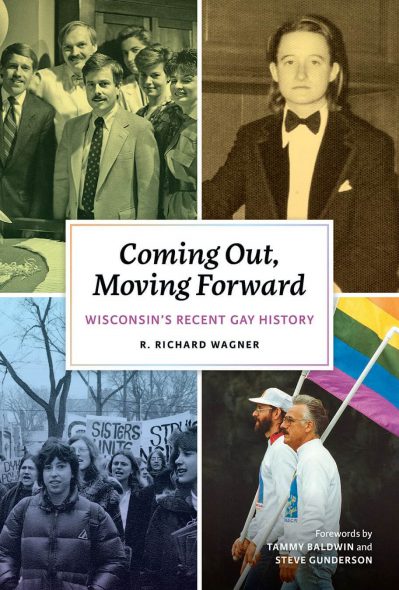 A new Wisconsin LGBTQ history credits the state’s and Republicans’ leadership in Progressive-era politics. Today many students observe the annual Day of Silence to protest discrimination.

Today is the 25th annual Day of Silence, when LGBTQ students and allies around the world observe wordless protest against bullying and discrimination. In classrooms that respect the event, reading is a popular alternative to speaking, so it is doubly appropriate that the Wisconsin Historical Society has recently published a history of how enforced silence has slowly given way to freedom for LGBTQ people.

“Coming Out, Moving Forward: Wisconsin’s Recent Gay History” is the second of two volumes by Madison-based author R. Richard Wagner. It covers the so-called Stonewall riot of 1969 through the 2010s.

U.S. Sen. Tammy Baldwin writes in the foreword that the author presents “the opportunity for young people growing up all over Wisconsin and in the Midwest in this century to know that they are not alone and that they stand on the shoulders of people who came before them and paved the way for the progress we have made in recent years.”

One of those young people was Baldwin herself, fresh from college. She recounts how Wagner became her role model, mentor and lifelong friend. She became the first openly lesbian member of Congress in 1999. She was elected to the Senate in 2013.

Wagner’s first volume, “We’ve Been Here All Along: Wisconsin’s Early Gay History,” came out in 2019. It begins with state newspapers’ coverage of Oscar Wilde in 1895. The Ho Chunk tradition of “two spirited” tribal members is recalled. Before Gay Pride was communal shaming; Madison raids in 1948 resulted in probation of four university students and more than a dozen arrests.

Wagner lived through the events covered in his second book. “Being an historian, I kept saving stuff,” says Wagner. “I had 40 boxes of gay history in my storage locker when I began writing, and I probably have equaled that much with research since.”

Much of the history is told through interviews. “In part it’s because I’ve known many of these people and their stories over the years,” says Wagner. “Having them present it themselves was important to me. And, in general, gay history is not well known for most readers — even LGBTQ readers — so I had a need for context. Those were different times. As an historian, I had to give people some sense of that. “

In 1983 Wisconsin Gov. Tony Earl appointed Wagner co-chair of his Council on Lesbian and Gay Issues, the first in the nation. Wagner was the first openly gay member of the Dane County Board of Supervisors, where he served for 14 years, starting in 1980.  He has also served on the Wisconsin Arts Board, the Wisconsin Humanities Committee, City of Madison planning commissions, the Madison Trust for Historic Preservation, and the board of the Friends of University of Wisconsin Libraries.

A native of Ohio, Wagner earned his doctoral degree in history from the University of Wisconsin-Madison in 1971. His dissertation was on the Progressive Era’s influence on prostitution. Reformers included John D. Rockefeller and Chicago’s pioneering social worker, Jane Addams, who was concerned for the “daughters of the poor.”

“That sort of began my interest in the sexual dimensions of history,” Wagner recalls. “It had kind of been unspoken and unresearched up until that time. As I was beginning to deal also with my own sexual identity, I realized that there was a big gap there: the sexual foray of history.”

During his work in state politics, Wagner more and more “noticed the differences between Wisconsin and some of the other states,” he says. “This state did have a sense of a statewide gay community back then, which many other places did not.”

By contrast, Illinois’ gay voices concentrated in  Chicago, and Minnesota’s in the Twin Cities. “But in part because you have the balance between Milwaukee and Madison and some early outstate efforts, there was a much more diverse coalescing around the state effort of gay advocacy in those early days,” says Wagner.

Part of the reason for the difference  was a flourishing gay media, but much of it was a holdover from the Progressive Era, when the nation was led by Wisconsin, Wisconsin was led by Republicans, and state Republicans were led by Robert LaFollette (1855-1925). As governor, congressman and U.S. senator, the Progressive firebrand’s political philosophy held through much of the 20th century in Wisconsin.

As a result, where other states attacked “sodomy,” here it was a matter of consenting adults. That’s something everyone could get behind. “We were able to frame the issue as discrimination,” says Wagner, “rather than a sexual issue per se.”

In 1982 Wisconsin became the first state to protect lesbians and gay men from discrimination in employment, housing and public accommodations. In 1983 the state legalized all sexual relations between consenting adults, including those between same-sex lovers.

“If you’re a young person picking this book up today you probably wouldn’t assume that the bills that passed in the 1980s had bipartisan support,” Wagner says. But they did. “That’s not the world today.”

He wants it to be a lesson to hesitant activists. “In an age of cynicism we need to remember those kinds of positive stories, because too often it’s easy to say, ‘We don’t want to do it because it has no effect.’  And that’s not true.”

The Wisconsin Historical Society offers several online LGBTQ articles. The Madison Metropolitan School District is observing the Day of Silence, and it’s endorsed by Gay Youth Milwaukee. In the past, UW-Madison has merged the event into its own Break the Silence day. The Day of Silence is organized by New York-based nonprofit GLSEN.org, formerly named the Gay, Lesbian and Straight Education Network. It has a Green Bay chapter.