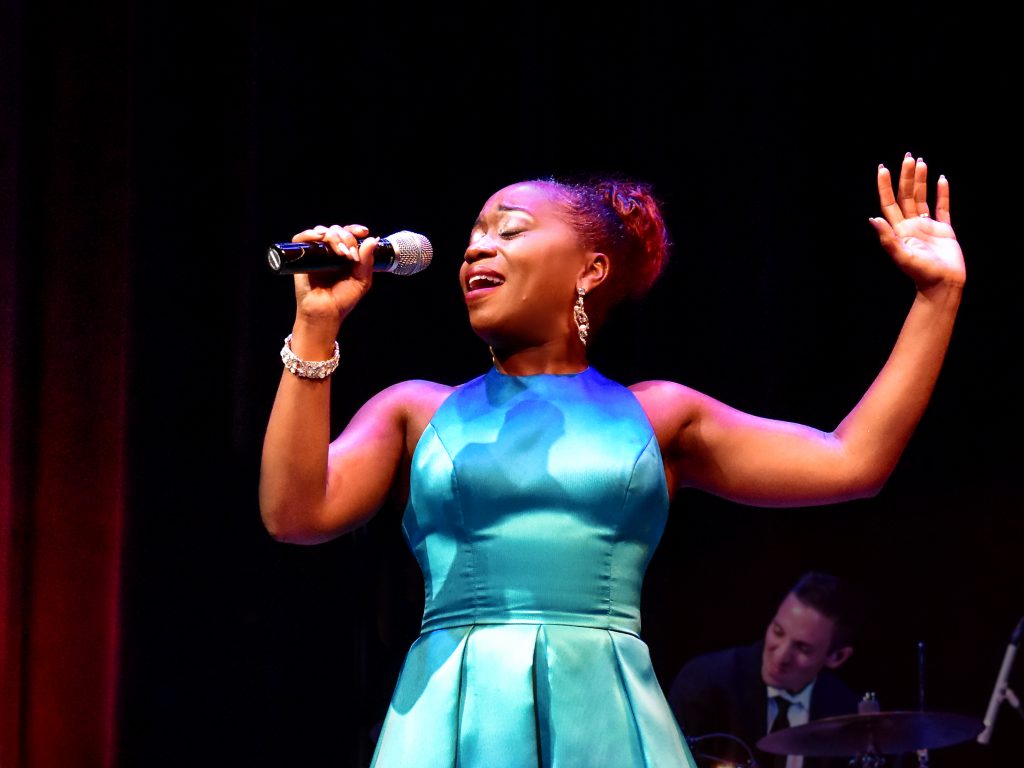 The Milwaukee Repertory Theater has scheduled a tribute to Ella Fitzgerald, The First Lady of Song, performed by Alexis Roston. Ella Fitzgerald had a long acclaimed career, from her first appearance in a talent contest in 1934 until her last in 1991 at her 26th performance at Carnegie Hall in New York City. She became an international singing star who filled clubs and theaters all over the world.

The path to stardom was not without challenges. After the tragic early death of her mother and then her stepfather, Fitzgerald not only got in trouble with the law but ended up at a reformatory school for girls. On her own, she began her career singing in talent contests. Musicians recognized her talent and shepherded her into the business. Bridging the swing era into bebop, she developed her skill by imitating other instruments with her voice and popularized scat singing.

Her first break came when she signed to sing with Chick Webb’s band for $12.50 a week. As she became widely known, her career took a huge jump when in 1938, she recorded her version of the nursery rhyme, A Tisket A Tasket. Because of the popularity of this song, over a million copies of the album including it were sold.  While she became primarily known as a jazz singer, she sang ballads and pop music with ease. She appeared on every musical variety show in early television. At the end of her career, Fitzgerald had performed with virtually every famous musician from Count Basie to Frank Sinatra and recorded over 200 record albums.

Despite her star status, Fitzgerald suffered the discrimination of era’s prejudice against Blacks. She was sheltered somewhat by her manager Norman Granz who wouldn’t allow his Black entertainers to be discriminated against. It was apparent that some venues wouldn’t book a Black entertainer regardless of their talent or fame.

Ella also got some help from another superstar. The manager of the Mocambo night club in Los Angeles got a call from a famous movie actress. Marilyn Monroe told him if he would book Ella Fitzgerald, she would be at a front table for every night’s performance. Ella credited that for her ability to book the larger venues for the rest of her career.

While she maintained a breakneck schedule of appearances, Ella made a lot of money, and she gave it back, supporting programs that served troubled children. In 1974 President Ronald Reagan awarded her The National Medal of Arts. Her international was recognized by France when she received their title of Commander of Arts and Letters. Not to mention honorary degrees from Yale, Dartmouth, and other universities.

Ella Fitzgerald died on June 15, 1996, of complications from diabetes. Of all the tributes to her upon her passing, the most memorable might be the wreath of white flowers placed next to her plaque on the Hollywood Walk of Fame.

The First Lady of Song will be performed at the Quadracci Powerhouse Theater from April 27th – May 23rd. Roston will be returning to The Rep. On her previous visit; she appeared as Billie Holiday in Lady Day at Emersons Bar & Grill. For this show, she won the Chicago’s Jeff Award and Black Theater Alliance Award. Also, Roston was fabulous in her 2014 appearance in The Color Purple.

This is an in-person performance for a limited audience (25% of capacity). The Milwaukee City health officials have approved the safety plans. Those safety measures require patrons to wear masks at all times

Tickets are on sale at www.MilwaukeeRep.com