Florentine Opera Returns To The Stage 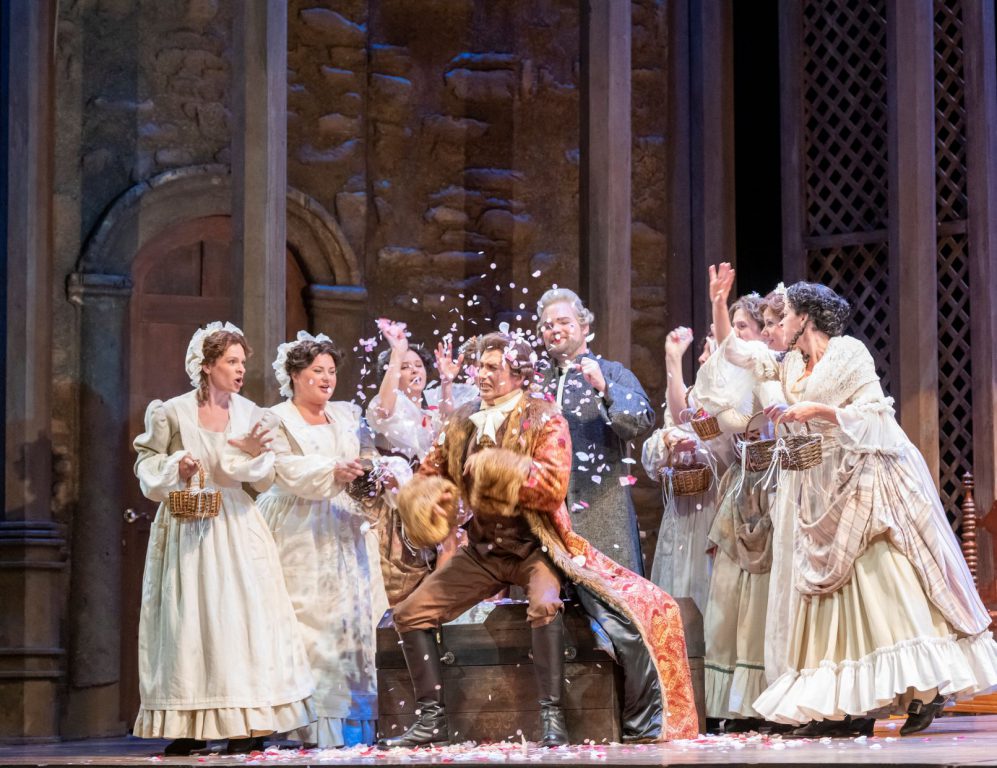 The Barber of Seville. Photo courtesy of the Florentine Opera Company.

The lights dim. The chattering of the audience dwindles to a silence. The newly renovated Uihlein Hall feels fresh yet has an air of familiarity to it. For the first time in what may feel like an eternity, it’s showtime.

It’s a moment that will likely bring Maggey Oplinger, General Director and CEO of the Florentine Opera Company, to tears.

“I’m not really a crier, but its just been so long,” Oplinger says. “It’s been a long time coming, and now it’s going by really fast.”

It’s been just over a year since the opera had to prematurely close the curtain on its 2019-20 season of shows, just short of debuting its performances of the season’s penultimate production The Tragedy of Carmen by Peter Brook.

“We called it a ‘tragedy of a tragedy’ because our opening weekend was sold out,” Oplinger says.

But now, the opera is making a triumphant return with its series of shows informally dubbed the opera’s “Return to Stage.” Florentine Opera’s Season Interlude — a digital and in-person hybrid season put together due to the pandemic — will include three different productions: La Vie En Rose, a performance by Eric Ferring and the opera’s mainstage production of Little Mahagonny.

Kicking off the season is La Vie en Rose, a production of French love songs performed by the Baumgartner Studio Artists. Tickets to the in-person production are already sold out, but tickets to view the performance digitally can be purchased starting April 22.

Next is the Milwaukee debut of Eric Ferring, a young breakout tenor who has been making waves with his performances at the Chicago Lyric Opera and the Santa Fe Opera. Ferring will be joined by Laurann Gilley, a pianist and coach who has been working with the Lyric Opera of Chicago for the past 15 years. Together, they’ll explore the works of Mozart, Handel, Schumann and Ben Moore in a performance that will blur borders and timelines.

“He’s a great storyteller,” Oplinger says. “I’m excited we got him into Milwaukee because I think he’s going to be performing in big houses (down the road). He has a great career ahead of him.”

Ferring and Gilley will perform on April 14 at the Marcus Performing Arts Center, in the Wilson Theatre at Vogel Hall at 7:30 p.m. Tickets are still available, and the digital performance will air on April 30.

Closing out the trio of shows is the opera’s mainstage production of Little Mahagonny, featuring the Baumgartner Studio Artists performing in both German and English. The opera, written by German composer Kurt Weill, explores the idea of “the grass is always greener.” On paper, the fictional land of Mahagonny appears to be heaven on earth. But upon closer inspection Mahagonny isn’t all that its cracked up to be. Oplinger notes that the theme of the play echoes with how many probably felt during the height of the pandemic shutdown.

The Milwaukee Symphony Orchestra will put together a 12-piece orchestra for the performance, which will feature a backdrop of melodic and jazzy numbers and a performance of “Alabama Song,” a tune popularized by The Doors but with lyrics by famed playwright Bertolt Brecht, who wrote the opera’s libretto.

Florentine Opera’s performance of Little Mahagonny will be the first to grace the stage of the newly renovated Uihlein Hall, which has been enhanced as part of a $4 million project. The renovations include new seats, new seating layouts (meaning that the hall will now have aisles), new safety protocols and an outdoor public space.

“The box area looks very different now,” Oplinger says. “Its really been given a total makeover. I’m just so excited to get in there myself and see an audience in there.”

And while seeing an audience in the new space is exciting for Oplinger, ensuring that the audience feels safe is a priority. Uihlein Hall will operate at 25 percent capacity, and the opera has worked in conjunction with UPAF and Imagine Milwaukee to meet the requirements of providing a safe experience for all involved.

“We’ve got a 60-page protocol guidebook that we adhere to — protocols for all performers,” Oplinger says.

Those protocols include performers avoiding staying in hotels that utilize a common door and ensuring that even backstage members of the production (stagehands and understudy performers who will replace cast members that become ill) are also quarantining.

Oplinger has had to consider aspects that have never before crossed her mind as general director — does she put the orchestra upstage (where it would traditionally never be placed) in order to keep musicians and the audience safer?

The expenses add up, but thanks to generous donations from the Florentine’s partners and supporters, the show will go on.

“We really felt like it was our mission to go back so that we could employ these performers and bring back our audience,” Oplinger says.

That audience includes regulars who have been coming to the Florentine Opera — Milwaukee’s oldest performing arts organization — for decades. One such couple has been attending shows at the opera for thirty years without missing a single production. Oplinger wants more than anything to honor that support.

“We know its hard to come back for some people, but we’re ready and excited,” Oplinger says, noting that those who are still unsure can catch the digital performances. And then she adds those magic show biz words, that no matter what, “Our show will go on.”