Experts Say Voting Could Be Easier 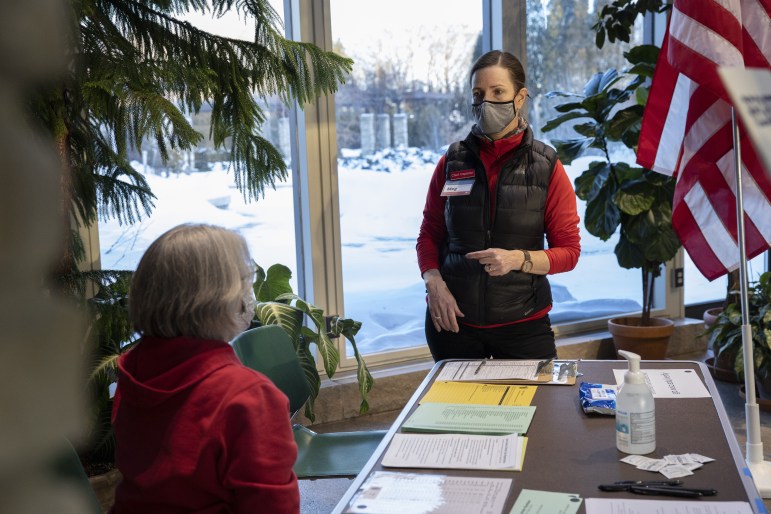 Poll worker Kathleen Krchnavek, left, talks with chief inspector Meg Hamel at the Olbrich Gardens polling site in Madison, Wis., on Feb. 16, 2021. They were discussing the absentee balloting process. Some Democratic lawmakers in Wisconsin want to make it easier to vote absentee while some Republicans are proposing additional restrictions, which Democrats describe as “a full-on assault on our elections and the ability for Wisconsinites to vote.” Coburn Dukehart / Wisconsin Watch

There are many ways to measure a successful election, said Barry Burden, director of the Elections Research Center at UW-Madison.

Those include turnout, voter registration rate, voting wait time, how many ballots and registrations are rejected and the ease by which people with disabilities may vote. In studies conducted by the nonpartisan Pew Research Center and MIT Election Lab, Wisconsin ranks highly in many of those measures.

In a December Election Law Journal article featuring a “cost of voting” analysis, researchers ranked the ease of registering and voting in all 50 states — considering changes like automatic voter registration and expanded early and absentee voting. They also measured convenience of voting, restrictions on registration and the existence of voter ID laws.

Wisconsin landed squarely in the middle, a drop from 2016. Researchers said the state can improve its ranking by implementing automatic voter registration through state agencies, letting people stay on a permanent absentee voting list, and setting Election Day as a state holiday, among other measures.

The state would also need to maintain certain existing practices, such as online voter registration, no-excuse mail-in voting and same-day voter registration. Same-day registration, enacted in Wisconsin in 1975, has been the “single most important best practice,” said David Canon, a political scientist at University of Wisconsin-Madison,

contributing to the state consistently having among the highest voter turnouts in the nation.

Still, changes can be made to the administration of these elections, which would improve the experience for voters and election workers alike, he and other experts said.

According to Tammy Patrick, a senior advisor at the Democracy Fund, a Washington, D.C.-based voting advocacy group, once voters experience the convenience of absentee voting, they tend to want to keep voting that way. 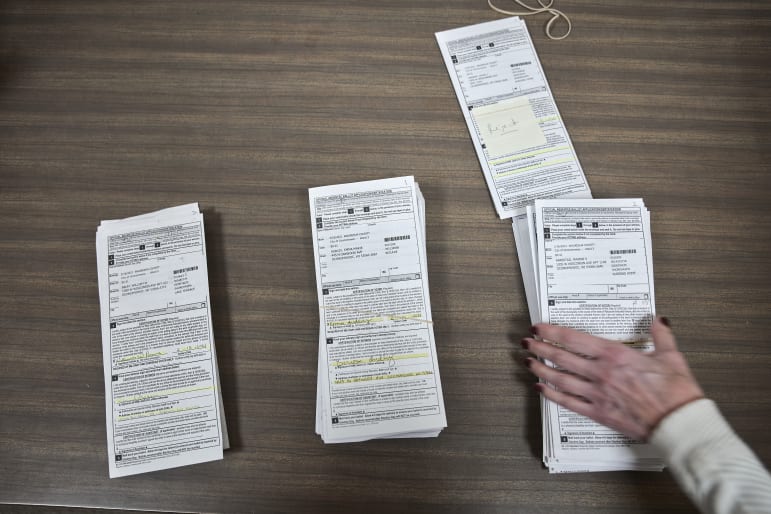 Diane Coenen, Oconomowoc city clerk, takes care of her daily duties during the primary election on Feb. 16, 2021 in Oconomowoc, Wis. Democratic Gov. Tony Evers and Democrats and Republicans in the Wisconsin Legislature have all proposed major changes to state election law in the wake of 2020’s contentious presidential election, but experts say the state’s political split will prevent major changes that lack bipartisan support. Darren Hauck for Wisconsin Watch

Wisconsin allows voters to apply for ballots by mail for all elections in a given year. Patrick said Wisconsin could establish a permanent list of voters who want to always vote absentee, rather than making a voter repeatedly reapply. The move would cut processing time and costs while still authenticating voters the first time they apply.

False allegations by President Donald Trump and his allies that mail-in voting enables fraud convinced many voters that the results of the Nov. 3 election were tainted. But vote-by-mail has been used by voters of all parties, with Republican voters somewhat more likely to use that tool in the past, said Mark Gaber, of the Campaign Legal Center, which advocates for nonpartisan election administration.

“It has not historically been something that was seen as a partisan issue,” Gaber said.

The state could also allow for postal delays by counting ballots that are postmarked by Election Day and arrive within a set timeframe after the election. A federal court order initially enacted the option before the April 7 election, but the U.S. Supreme Court rejected that ruling hours before the polls opened, leaving many would-be absentee voters in the lurch.

Another way to ensure on-time delivery is ballot tracking. Some municipalities in Wisconsin use barcodes to track ballots being sent out from clerks’ offices, but those trackers are not on the return envelopes — although voters can still check the MyVote website to see if their ballot arrived at the clerk’s office.

Implementing a two-way tracking system would increase transparency, said Burden, and would likely earn support from both parties.

“I think Democrats liked them, because their main worries are about ballots not being received or returned, and a voter being disenfranchised,” he said. “For Republicans, I think it provides some security about the integrity of the election …. If the election official ever thought that someone was fraudulently stealing ballots out of mailboxes and sending them, they could simply check the online tracking system, and the voter could do that as well.”

Wisconsin requires absentee voters to get a witness signature and a witness address on their absentee envelopes. Proponents say it offers a layer of authentication, while opponents say it erects an unnecessary hurdle, especially for people who live alone.

It also can lead to disenfranchisement: 1,434 ballots in November were rejected for insufficient certification. 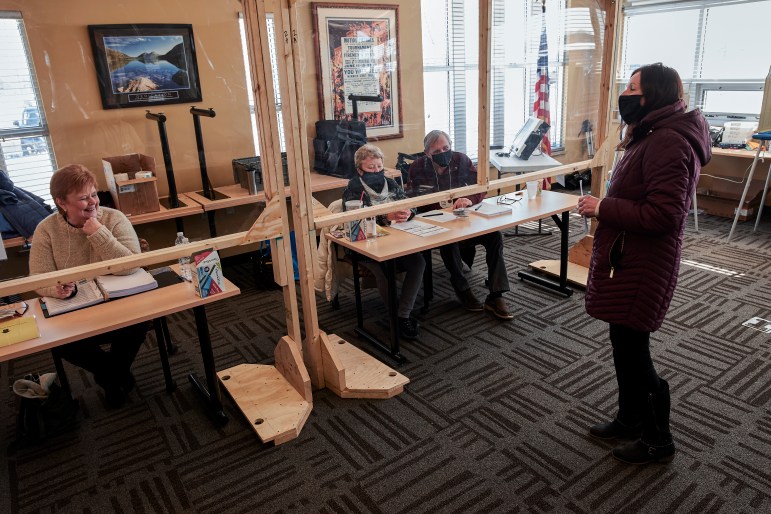 Diane Coenen, right, Oconomowoc city clerk, checks into the District 3 polling station as she makes her rounds during a primary election on Feb. 16, 2021 in Oconomowoc, Wis. Coenen favors changes to election law to allow clerks to begin processing absentee ballots before Election Day. “In today’s political environment,” she says, “everyone wants the results fast.” Darren Hauck for Wisconsin Watch

The Wisconsin Elections Commission has advised that clerks who receive absentee ballots with incomplete or missing witness addresses “shall do all that they can reasonably do to obtain any missing part of the witness address” — including making the correction themselves. A common error is people who witness their spouses’ ballots who do not also fill in  their address, which is required even if it matches the voter’s. Clerks may also contact voters to let them know if their ballots are incomplete and arrange for them to fix it.

In November, the absence of a clear law around ballot curing led to mistrust of this process. The Trump campaign’s recount petition challenged the authority of clerks to fill in witness addresses.

Issuing definitive legal guidance around how clerks can respond to incomplete witness signatures would let Wisconsin avoid even the appearance of impropriety and create consistent enforcement of rules across municipalities, said Diane Coenen, Oconomowoc city clerk and former president of the Wisconsin Municipal Clerks Association.

“We should make sure that everybody does the same processes in the state so there is no question of if things were done right,” Coenen said.

The nonprofit Wisconsin Watch (wisconsinwatch.org) collaborates with WPR, PBS Wisconsin, other news media and the University of Wisconsin-Madison School of Journalism and Mass Communication. All works created, published, posted or disseminated by Wisconsin Watch do not necessarily reflect the views or opinions of UW-Madison or any of its affiliates.