Schools will be able to serve free meals through summer and all of September.

By Madeline Fox, Wisconsin Public Radio - Mar 13th, 2021 05:01 pm
Get a daily rundown of the top stories on Urban Milwaukee 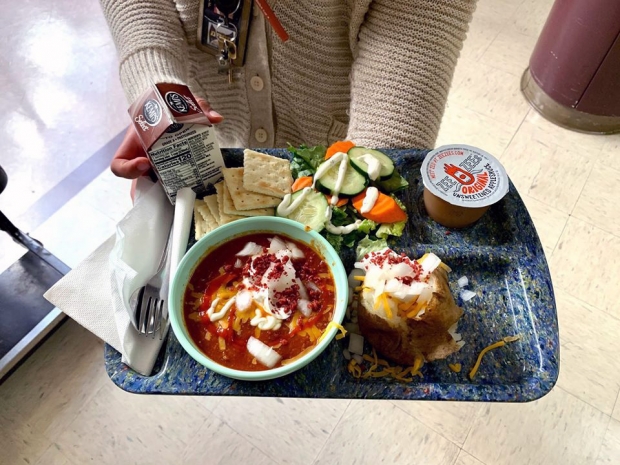 Wisconsin schools will have the flexibility to serve free meals curbside and outside normal mealtimes or group settings through Sept. 30, the U.S. Department of Agriculture announced Tuesday.

Schools have been able to provide meals to all students for free throughout the pandemic, rather than having them pay according to a tiered free, reduced-price or subsidized full-pay scale based on their families’ income. In some Wisconsin school districts, the now-extended USDA waivers have led to an increase in the number of students receiving free meals.

Michael Gasper, supervisor of nutrition services for the Holmen School District and president of the School Nutrition Association of Wisconsin, said the extension adds stability for school districts still grappling with its students’ changing needs during the pandemic.

“It was a much-needed extension of the (USDA) waivers,” he said. “There’s still a lot of people out there struggling, a lot of kids who don’t know where their next meal is coming from.”

The USDA already had programs for free summer meals, but it’s the greater latitude in how they’re distributed that’s key, said Jennifer Gaddis, a faculty fellow in the University of Wisconsin-Madison’s department of Civil Society and Community Studies. She is also the author of “The Labor of Lunch: Why We Need Real Food and Real Jobs in American Public Schools.”

“It provides not only a lot more flexibility in terms of what schools might be doing during the pandemic, but (it’s) also more generally a really important move for helping with some of the concerns that come up every year … with respect to food insecurity during the summer,” she said. “Typically, here are these restrictions that say, OK, well, if you’re going to distribute food to young people under the age of 18, they have to all come together in one place, and they have to eat the food there, and that can be really challenging.”

Generally, Gaddis said, the summer food programs see lower participation than school-year meal programs. Students might not have the same access to food because the meal sites aren’t close to where they live, or the timing doesn’t work for when they or their families can swing by.

Under the waivers, the features that made meals more accessible last summer and throughout the school year will continue, depending on how districts use them: they may let families pick up several days’ worth of meals in one trip, drop them off to families, or offer a range of options that aren’t limited to having all the students grouped together and served at the same time.

“These waivers have really lowered some of the barriers of accessibility,” Gaddis said.

The USDA waivers in response to the pandemic have also strengthened efforts to make those policies more permanent.

Gasper and his organization want to see free lunches for all, even after the pandemic. As part of the School Nutrition Association’s annual conference, which was held virtually this year, Wisconsin members met with state legislators to push for fully subsidized lunches on Wednesday. Gasper said most were receptive to the idea.

“I think they realize how important school nutrition really is to these kids,” he said. “If kids can get their meals here, that’s going to take care of the lunch shaming that was such a big deal a couple years back. That’s going to take care of the negative debt that’s plagued just about every school nutrition program in the state, and really make that time much more pleasant for the kids.”

There’s precedent for changes to the school lunch system in times of crisis. Andrew Ruis, a professor at the University of Wisconsin-Madison who wrote a book on the origins of school lunch, said the current program is rooted in the response to similar upheavals, and that many other changes to the program have similarly come out of crisis responses made permanent.

“A big driver of the reason we have a national school lunch program in the first place was a crisis, was the Great Depression,” he said. “I’ll be very interested to see how many of these changes that have happened as a temporary relief effort end up getting instantiated in law or policy as a permanent fixture of the program.”

Gaddis said the financial picture has been a little more complicated in some districts. While many have seen increased use of school meal programs while they’re free, others have seen falling demand for both usual meals and individual items — fruit, snacks, cookies — sold separately, especially if students are learning virtually.

“It’s awesome that school meals are being offered universally for free. It’s created a ton of opportunities for advocacy around creating a universal school meal program,” she said. “At the same time, we’ve seen that so many school districts, because they — especially in more middle income places — typically rely on the paid meals or the à la carte meals as big contributors to their overall budget, have gotten into some financial trouble.”

At the same time, some costs have gone up because of additional sanitary measures and, for those offering grab-and-go meals or boxes of food, the purchase of bags, boxes and other containers.

“Gloves used to cost me 40 bucks a case; now it’s closer to 160,” he said. “There’s a lot of demand for these kinds of products, and I think supply, while it’s catching up, I think it’s gonna take a while.”