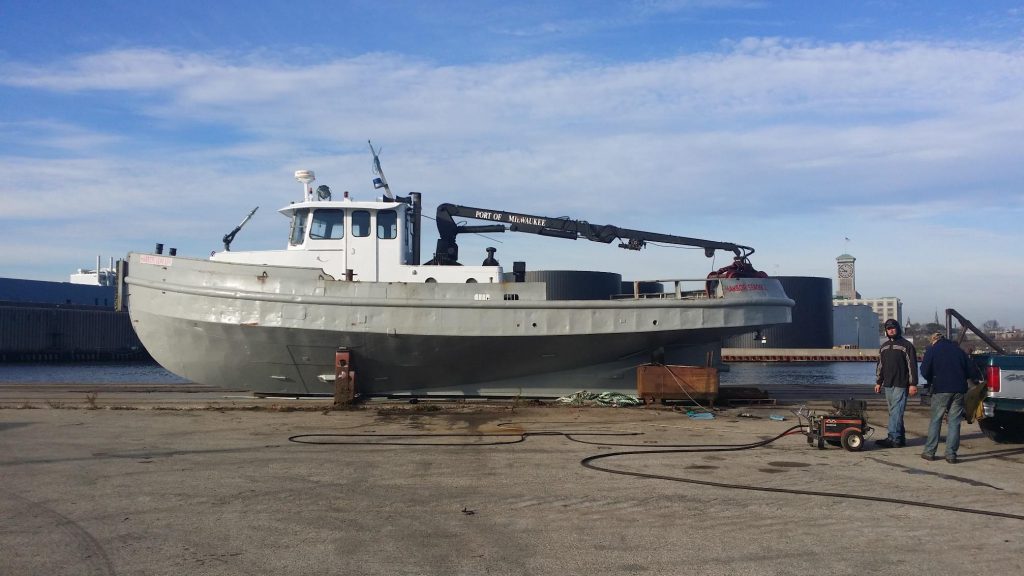 Harbor Seagull. Photo courtesy of the City on Milwaukee.

A Port Milwaukee Tugboat called the Harbor Seagull sank early Monday morning at a dock in the inner harbor.

No one was hurt, as the vessel sank overnight while unmanned. The 50 foot workboat was discovered to have sunk at approximately 5 a.m., said Port Director Adam Tindall-Schlicht.

It is believed that the vessel started taking on water late Sunday night or early Monday morning. But the cause of this is currently unknown.

The boat went down in what is likely several dozen feet of water. It sank along a dock just east of the UW-Milwaukee School of Freshwater Sciences, on E. Greenfield Avenue. The dock, near the Lafarge Cement Silos and Kaszubes Park is on a federal navigation channel, which Tindall-Schlicht said is dredged to 27 feet by the Army Corps of Engineers.

The port will lift the vessel out of the water Tuesday morning using a crane attached to a barge. The boat will be removed to a port-owned dock where a crew will set about diagnosing what caused it to take on water and sink.

So far, there does not appear to be any environmental damage that occurred as a result of the vessel sinking, Tindall Schlicht said. The boat had approximately 100 to 120 gallons of diesel on board when it went down, but there isn’t any “major sheen” on the water to suggest spillage, he said.

When the boat is lifted out of the water Tuesday, there will be an environmental consultant on hand to identify any pollution or environmental degradation where it has sunk. If identified, remediation work will begin immediately as it’s being pulled out. There’s already an oil absorbent boom and pads in place.

The last time the boat was in action was Saturday, Tindall-Schlicht said. It  was breaking ice on Kinnickinnic River for about 10 hours to support the ongoing work at the River One development site at the northwest corner of S. 1st St. and W. Becher St.

The Harbor Seagull is the older of the port’s two workboats. It was built in Escanaba, Michigan by the  T.D. Vignette Shipbuilding Company in 1961, according to the Shepherd Express. It’s been in service approximately 60 years, breaking ice, pulling large pieces of floating debris out of rivers and securing larger vessels and barges to docks in the harbor. In the past it even assisted the Milwaukee Fire Department, using its powerful pump to fight fires. The port’s other tugboat, the “Joey D”, is 9 years old.

The last time the boat took on water was more than five years ago. After that occurred the boat received about $45,000 in preventative maintenance, Tindall-Schlicht said.

The port still has one workboat that can break ice in the port and on the rivers. There are also private contractors standing by to support any ice breaking needs, he said.

Until the Harbor Seagull is fixed, the port should be able to function with just one tugboat. But it’s preferable to have at least two port-owned tugboats in operation, the director said.