By Danielle Kaeding, Wisconsin Public Radio - Feb 2nd, 2021 10:33 am
Get a daily rundown of the top stories on Urban Milwaukee 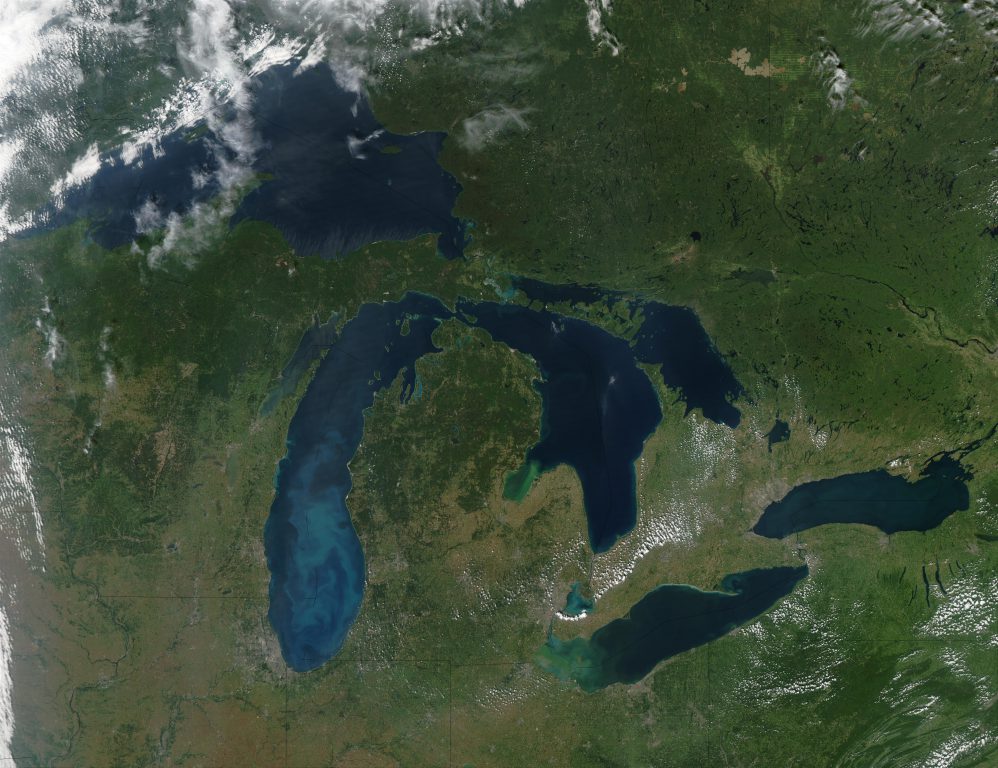 Scientists with the National Oceanic and Atmospheric Administration (NOAA) project just 30 percent of the Great Lakes will be covered in ice this season based on the most recent forecast, said James Kessler, a physical scientist with NOAA’s Great Lakes Environmental Research Lab. Last year, ice cover on the lakes maxed out at 19.5 percent, according to the lab’s data.

The long-term average of annual maximum ice cover recorded on all the lakes combined since 1973 is roughly 53 percent. Ice cover varies across each system, with Lake Superior expected to reach 30 percent coverage this winter after topping out at 22.6 percent last year. Lake Michigan’s ice cover is projected to hit 23 percent after reaching 17.2 percent last winter.

Kessler said trends show the lakes are seeing a 5 percent decline in their annual maximum ice cover per decade. That loss is even greater for Lake Superior, which is seeing about an 8 percent decline every 10 years.

“Ice cover in the Great Lakes is extremely variable,” said Kessler. “We’re seeing possibly even more variation as time goes on as far as extreme lows and extreme highs.”

Researchers have previously found climate change is causing lakes around the world to heat up faster than the oceans. A 2015 study by more than 60 scientists found ice-covered lakes like Lake Superior are warming more rapidly than those without ice cover.

In 2007, researchers at the University of Minnesota in Duluth found that the lake’s summer water temperature had increased by about 5 degrees Fahrenheit from 1979 to 2006. They said Lake Superior could be ice-free in a typical winter within decades if ice cover continues to decline.

A new study by Toronto’s York University published in December found if current warming trends continue, many lakes in the Northern Hemisphere would be ice-free by the end of the century. That includes Green Bay on Lake Michigan and Bayfield Bay on Lake Superior.

Under higher greenhouse gas emission scenarios, more than 5,600 lakes could permanently lose ice cover, said Alessandro Filazzola, co-author and researcher with York University and the University of Toronto. He said Wisconsin is in a sensitive area where lakes are becoming more and more ice-free.

“What we could expect in the next few decades of places around the world, Wisconsin is going to be one of these areas that is going to experience or have more lakes that are going to become permanently ice-free, whereas lakes that are further north might still freeze because it’s just simply a lot colder up there,” said Filazzola.

If steps are taken to lower greenhouse gas emissions, Filazzola said the number of lakes that may never freeze again could be limited to around 200 by the end of the century.

“There is the good side, where even a reasonable action — doing kind of a small steps towards reducing carbon emissions — could have a good impact,” he said. “And, therefore, it’s really in our best interest to do this because ice is really important for not only natural systems, but also for humans themselves.”

Filazzola said the lack of ice cover would impact not only human activities like ice fishing and tourism-based businesses, but it could also pose significant impacts to water quality. Open water may leave lakes more susceptible to nutrient runoff, resulting in greater algal blooms when combined with lake warming. The loss of ice on lakes could also have significant impacts on fish populations.