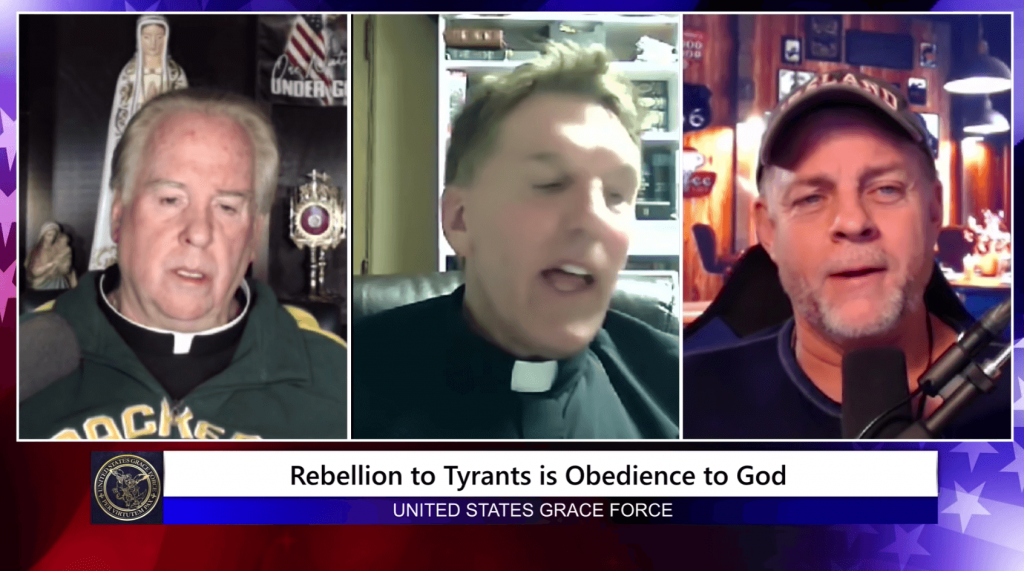 Fathers Richard Heilman and James Altman (left and center) appeared on a podcast saying antifa was behind the attack on the U.S. Capitol. (Screenshot | Youtube)

Two Catholic priests from Wisconsin appeared in a podcast, one day after the U.S. Capitol was attacked in a violent insurrection, to spread conspiracy theories that the riot was actually a “false flag” incited by members of antifa.

The two Wisconsin priests were joined by Doug Barry, a Catholic speaker with a website that advertises a service for getting Catholics “battle ready.”

The podcast, U.S. Grace Force, which aims to “grow a huge military of spiritual warriors,” has more than 45,000 subscribers on YouTube. The episode in which Heilman and Altman appear was recorded Jan. 6, the day of the Capitol riots, and is titled “Rebellion to Tyrants is Obedience to God.” The episode has racked up more than 72,000 YouTube views.

A Patreon associated with the podcast sells access to “tiers.” For $5 a month, a person can join the U.S. Grace Force Infantry to receive exclusive footage. For $25 per month, a person can become a General and receive Heilman and Barry’s “Checklist to Spiritually Defend Your Home.” At the $100 a month tier the member becomes a part of the “Secret Service” and receives the U.S. Grace Force weapons case.

“Methinks me have me doubts,” Heilman says early on in the show. “With limited information, but from what I can tell so far, it seems like some of this was an infiltration of antifa. There’s a lot of evidence showing they had messaging to each other leading up to this event where they were going to disguise themselves as Trump supporters.”

Later in the podcast Altman calls the Capitol riot a “false flag,” a term commonly used by online conspiracy theorists such as Alex Jones, while Barry says a single man on Facebook told him that for sure “one bus-full of antifa members,” was in on the attack.

“Why disguise yourself as a Trump supporter unless you’re going to do something to make the Trump supporters look bad,” Heilman asks. He also asserts in the podcast that Jake Chansley — the QAnon follower who stormed the Senate chambers while wearing Viking horns and carrying a spear — is a member of antifa. Chansley, also known as the QAnon Shaman, has been charged with federal misdemeanors and has a long history of right-wing activism.

The three men say on the show that the violence was wrong and only happened because antifa members egged rioters on. The FBI has refuted this claim.

Aside from the refusal to believe that the insurrectionists were conservatives and Trump supporters incited by the president, the three men spend time attacking people of color, Democrats and the media, among other targets.

“They fired all of those police that were involved in that, what’s her name?” Altman said about the Louisville police officers who shot and killed Breonna Taylor. “Listen, nobody’s got the guts to say, ‘Hey sweetheart, you were hanging around a bad guy to begin with, that’s why the police were coming over there.’ And now you kick him out, you’ve got another bad guy in there who’s shooting back at the police. Okay, you brought that on yourself.”

The three consistently complained the media wasn’t helping them to advance their agenda.

In a discussion about whether Catholics need to prepare for the coming civil war, Altman said it was necessary to do more than pray or Catholics and conservatives would be rounded up “like the Jews in the ghettos.” He also called both Biden and Franklin Roosevelt communists while saying “no Catholic can vote with [Kamala Harris’] name on the ticket.”

While exit polls aren’t an exact measure of how a demographic group voted, they found the Catholic vote split 50-50 between Trump and Biden.

Several times in the episode the three men implied that soon violence will be necessary to protect America. Heilman said it will require Catholics to be “strong” because “we’ve got a battle on our hands.” Altman threatened that a time is coming when he and others will break and need to fight because people are trying to destroy America.

“The last six months we’ve seen the godless rioting, looting, burning and shooting,” Altman said. “If all of a sudden [Trump supporters are] going to be demonized by this filthy left-wing media. So there comes a point where we’re not going to take it anymore.”

Barry was even more explicit, saying near the end of the show that large-scale political violence is coming.

“If anybody in their right mind doesn’t see more trouble coming,” Barry said. “Potentially war, civil war, violence on a larger scale, you’ve got your head buried in some sandbox somewhere I can’t even help you.”

The three men do worry about all the collateral damage that will occur as they fight for the country.

Several times in the podcast, Altman goes on a tangent of COVID-19 conspiracism against masks and vaccines — though the show bleeps out those two words.

The scientific consensus among epidemiologists is that quarantines, mask-wearing and social distancing are very effective measures to mitigate the spread of COVID-19.

“We are being trained up to be controlled,” Heilman added.

The Catholic Dioceses of Madison and La Crosse did not respond to requests for comment about their priests.

Heilman and Altman did not respond to requests for comment either, though they did say they would come for anyone who tried to criticize them.

“The people on the left should fear trying to cancel any one of us,” Altman said.