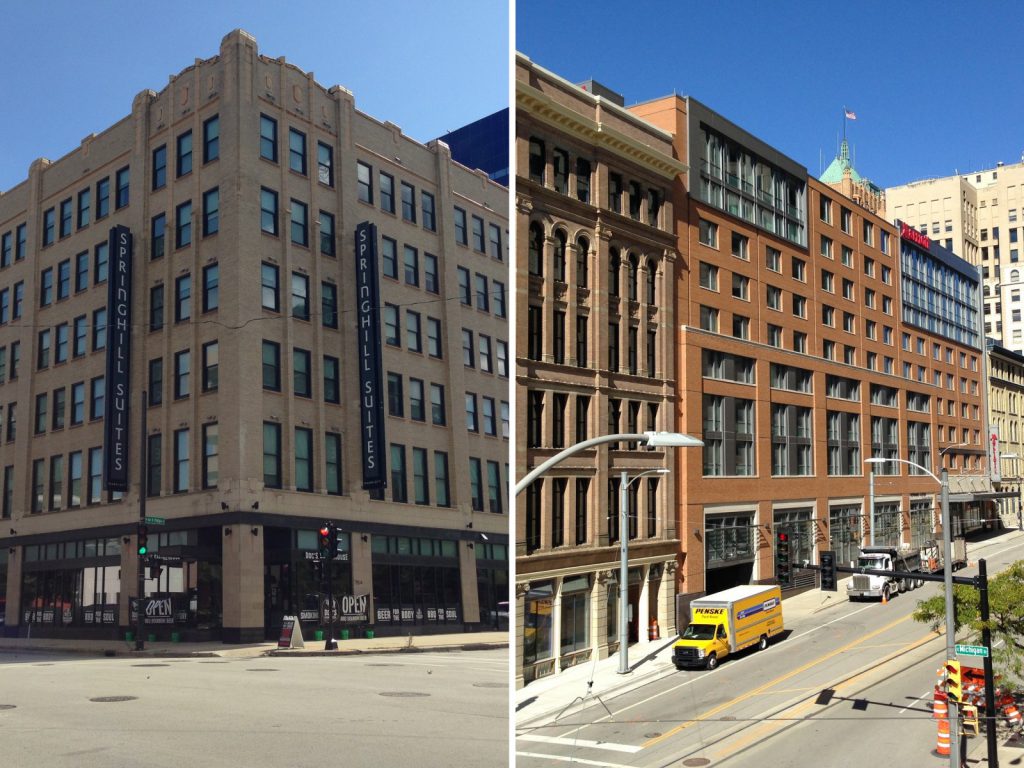 The owners of two downtown hotels will receive $558,044.35 as part of a settlement regarding property tax assessments.

In pending lawsuits, the two investment groups were seeking a property tax refund of $2.4 million plus interest and costs. City Attorney Tearman Spencer recommended the settlement rather than fight the battle in court, noting the city could lose $3.2 million.

It would end a property tax dispute that goes back to the 2017 tax year. As part of the settlement, the investment groups would drop any challenges to their 2020 bills. The negotiated deal includes annual assessed value reductions of up to 14%.

“I just think that for the purposes of anyone watching this discussion online, this is a process that any taxpayer can utilize if they have the druthers, if they have expert witnesses and if there is enough money at stake,” said Alderman Robert Bauman.

“Once you get to the circuit court stage, these are property owners that are well represented and a lot of money is at stake,” said assistant city attorney Hannah Jahn.

The cases started as appeals to the Assessor’s office and then the Board of Review. Those appealing their assessments can appeal a Board of Review decision in court, but the likely spending on legal fees often doesn’t make sense for individual homeowners given the value of their homes.

Get a daily rundown of the top stories on Urban Milwaukee
“This kind of shows the difference between large taxpayers with lawyers and experts and ma and pa kettle with a little bungalow on the North Side or South Side that feel that they too have been improperly assessed,” said Bauman. “They basically are left hanging in the breeze, while the Board of Review takes its sweet time, sometimes months and years.”

The committee unanimously endorsed the deal. The full council will vote on the settlement on January 19th.

While the settlement discussion was brief, the committee spent over an hour discussing the broader assessment process with Assessment Commissioner Steve Miner.

The city saw a record number of assessment appeals in 2020, largely driven by growing residential property values. Miner said residential property taxpayers are paying for a growing share of the city’s property tax levy. Residential values grew 11.52% in the past year, the highest of any property class by at least four percentage points. Values currently are accurate as of January 1st, 2020. The commissioner said low interest rates and a limited supply were resulting in increasing prices.

Miner, at committee chair Ald. Ashanti Hamilton‘s prodding, said that any conspiracy theory about the city intentionally raising assessments to raise revenue is unfounded. “There is not an incentive for us to be high or low, the department of revenue basically grades assessors on their accuracy. The accuracy is based on sales,” said Miner.

State law effectively caps the amount of revenue the city can raise through property taxes. New construction is effectively the only way to grow the size of the tax levy. “All that we are doing is dividing up everyone’s share of the total tax base,” said Miner. A Milwaukee Public Schools referendum, approved by voters in April, boosted all tax bills.

“It’s just a redistribution, it’s not a net increase,” said the commissioner. “If everybody’s assessment was cut in half, just imagine that, the rate would have to be doubled and the amount collected would remain the same.”

“If we increase everyone’s assessments, that doesn’t impact the levy at all,” said Miner.

Council members asked if 2020 appeals were submitted across the whole city or concentrated in certain areas. “I don’t think there is any neighborhood or any appraiser that hasn’t received appeals this year,” said chief assessor Peter Bronek.

There are changes planned for 2021. The Assessor’s Office is not planning to do a citywide reassessment, a process that has been annual since 2002. Miner said an annual revaluation is a measure of fairness, but his department is overburdened with appeals from the current year and short staffed. He said five of 26 appraiser positions are vacant, as are a handful of other positions in his department. Jim Klajbor, deputy city treasurer, said the latest round of tax bills triggered a record-breaking number of calls.

Improvements will be made to the department’s website and functionality will be created to move much of the appeals process online. “Both of those are things we thought we needed to improve,” said Miner. The commissioner also said a contractor is working to provide the office, and other city departments, with detailed exterior photos of every property. A drive-by effort was completed in December.

A copy of Miner’s presentation is available on the city website.