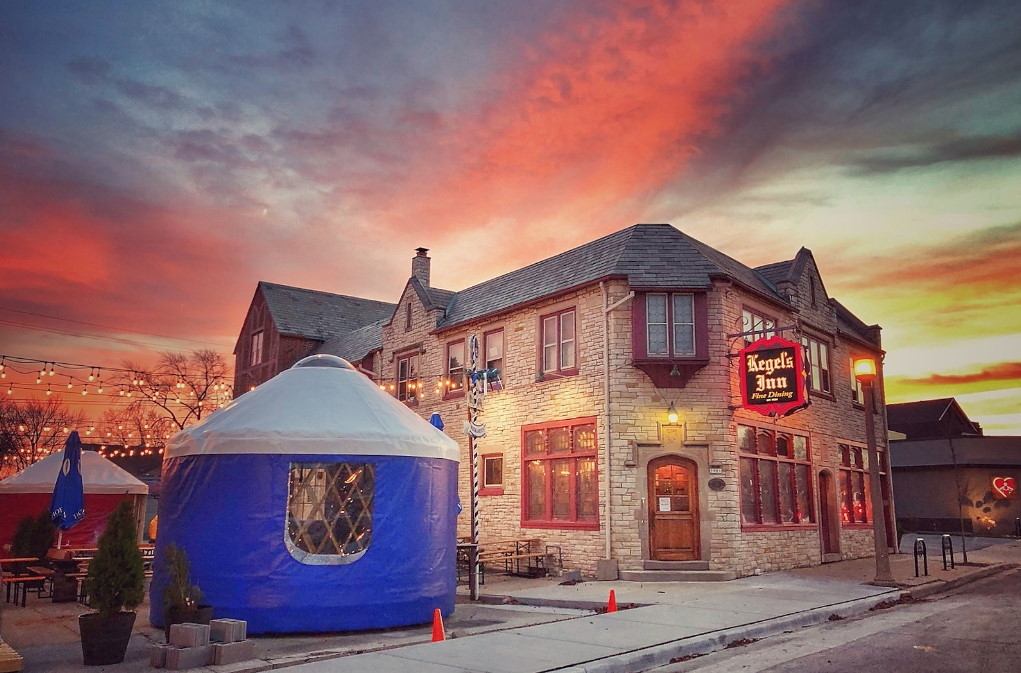 Kegel’s Inn (5901 W. National Ave.), a long-running, family-owned restaurant known for its historic dining room and fish fry, has announced it will convert its beer garden into a “Brrr Garden” — a heated, socially-distanced outdoor space for patrons to eat and drink. The Brrr Garden will feature 10 outdoor tables soaking in the warmth of two real fire pits assisted by additional patio heaters. The Brrr Garden will also feature Milwaukee’s only yurts — a portable round tent originating from central Asia. And this at a German restaurant, that’s thinking outside the box. The 11-foot-tall yurts will be lit, decorated, ventilated, heated and — most importantly — sanitized between uses. Three yurts will be available to rent for the whole night on weekdays and Saturdays, with restrictions on Fridays allowing for 90-minute time slot rentals. The yurts can accommodate a minimum of six guests and a maximum of 12. A $250 minimum expenditure is required to reserve a slot, plus an additional 20% service charge.

The Bartolotta Restaurants’ upscale French bistro, Lake Park Bistro (3133 E. Newberry Blvd.), will be the next to reopen as part of the restaurant group’s reopening program. The restaurant, which is celebrating its 25th anniversary this year, will reopen for indoor dining on Wednesday, December 9. As part of the reopening, Lake Park Bistro will be reimagined as a Haute Bistro, with Chef Paul Bartolotta drawing upon his time spent cooking in France. The reopening will feature a four-course menu that allows diners to choose from an appetizer, middle course, fish or meat entree and a dessert for $65 per person. Lake Park Bistro will be open from 5 p.m. to 9 p.m. Tuesdays through Sundays and will operate at 25% capacity. The Bartolotta Restaurants will also expand the days of operations at its other reopened restaurants to six days a week.

Despite having the actual event canceled this year, the Wisconsin State Fair still managed to get its famous cream puffs to the public. The State Fair took its annual tradition even further in October with the pumpkin spice cream puff. And, keeping that enthusiastic holiday spirit going, its now introducing the new cocoa cream puff — a puff pasty shell filled with chocolate cream. OnMilwaukee’s Matt Mueller reports:

Preorders for the new cocoa cream puffs cost $14 for a three-pack and $25 for a six pack – though, if you place your order between now and Dec. 6, you can snag a tasty discount to go with your delicious desserts, scoring a three-pack for $12 and a six-pack for $22. So order sooner than later by claiming your cream puffs online at the Wisconsin State Fair website, beginning today.

As for picking up your chocolatized cream puffs next month, vehicles should enter State Fair Park though Gate 5, found at 640 S. 84th Street. The curbside pick-up spot will be open Friday, Dec. 11 and Saturday, Dec. 12 from 8 a.m. until 6 p.m., as well as on Sunday, Dec. 13 from 9 a.m. until 4 p.m. Customers are asked to stay in their vehicles to ensure social distancing and keep any lines moving as smoothly as possible.

And becacuse it is the season of giving, the State Fair will offer several additional goodies to serve as stocking stuffers for others – or mouth-stuffers for yourself. The curbside menu will also feature peppermint brownies and classic chocolate chip cookies for sale, with three-packs costing $12 and $9, respectively, through Dec. 6. (The price bumps up to $14 for the brownies and $11 for the cookies after that date.) State Fair also offers several ticket deals on admission packages, bundles, coupons and vouchers as well, including $35 for four admission tickets and a cream puff three-pack voucher. For other packages and deals, visit the State Fair’s website.

The View MKE Closes for the Winter

Brewers Hill restaurant the View MKE (1818 N. Hubbard St.), which took over the space previously occupied by restaurants Roots and Wolf’s Peach, has announced via a Facebook post that it has shut down operations for the remainder of the winter. The post cites “a challenging year” with “uncertainty still in the air” as the reasons for closing its doors as restaurants begin to transition into winter. The post also urges people to support local businesses, and thanks the restaurant’s staff for its hard work and dedication through “very trying times.” Oh, and the post mentions a reopening in spring, so it’s not the last we’ve seen of The View MKE.