Deal could mean something gets manufactured at Racine County plant. 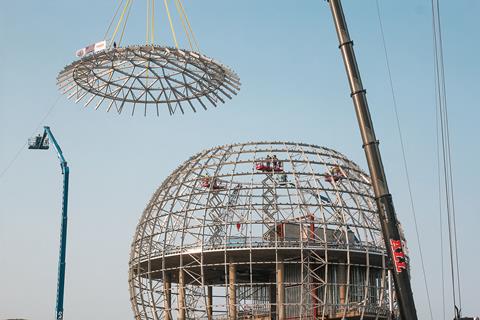 Has Foxconn landed a deal with Google to assemble server components at its Mount Pleasant plant in Racine County?

So says a story by Bloomberg, which reports Foxconn landed a deal with Google and is establishing assembly lines for making circuit boards, with a goal of starting production early next year. Foxconn confirmed to Bloomberg that it was developing computing and infrastructure “capabilities” but did not name customers. But other sources did.

“The Taiwanese company has decided to locate production for this new contract at the existing complex rather than make the components at home or in China, the people said, asking not to be identified,” the story reported. “Foxconn is setting up surface-mount technology assembly lines that it will use to place semiconductors onto circuit boards, they added.”

Google selected Foxconn because the latter “was the only contract manufacturer capable of establishing a surface-mount technology line on American soil, one of the people said.” Google is looking to win U.S. government contracts, and that would be a much easier sale if the components were made in America, the story suggested.

The story helps reinforce an Op Ed by Foxconn vice chairman Jay Lee for the Wisconsin State Journal, where he promised this: “Foxconn plans to move into a 296,000-square-foot Smart Manufacturing Center we’re building by the end of this year, which will be the home of ‘Made in the USA’ data servers and data server racks production… Foxconn is now positioned to meet the growing demand for secure and reliable data transmission and is poised (to) capture a substantial percentage of the data server market share in the United States.”

In short, the off-the-record sources speaking to Bloomberg are reinforcing a storyline Lee has already offered the press. Given the history of Foxconn’s many promises made to Wisconsin, none of which has come to fruition, there’s no guarantee this promise will come true.

And for Foxconn to manufacture the components in Wisconsin rather than in China, Vietnam or India, where all its other plants are located and the wages paid workers are much lower, it would surely require the promised subsidy from the State of Wisconsin. But the operation to manufacture server components, according to Bloomberg, would be done by the Foxconn subsidiary, Foxconn Industrial Internet Co., which was not a party to the state contract signed three years ago, meaning it would be ineligible for any subsidies.

Meanwhile. the company has refused to renegotiate a contract with the state to make it comply with the current plans of the company, rather than its fanciful promises to build a 10-million-square-foot plant to manufacture massive Gen 10.5 LCD products while investing $10 billion and employing 13,000 employees. Since then the company has scrambled to find any business plan that made sense for the facility, floating plans to make everything from airport coffee kiosks to ventilators to launching fish farming or dairy exporting businesses. This plan, if it turns out to be real, would fall far short of the “eighth wonder of the world” that Foxconn booster Donald Trump promised. But for the first time, it could provide some real jobs.

Categories: Back in the News, Business, Weekly