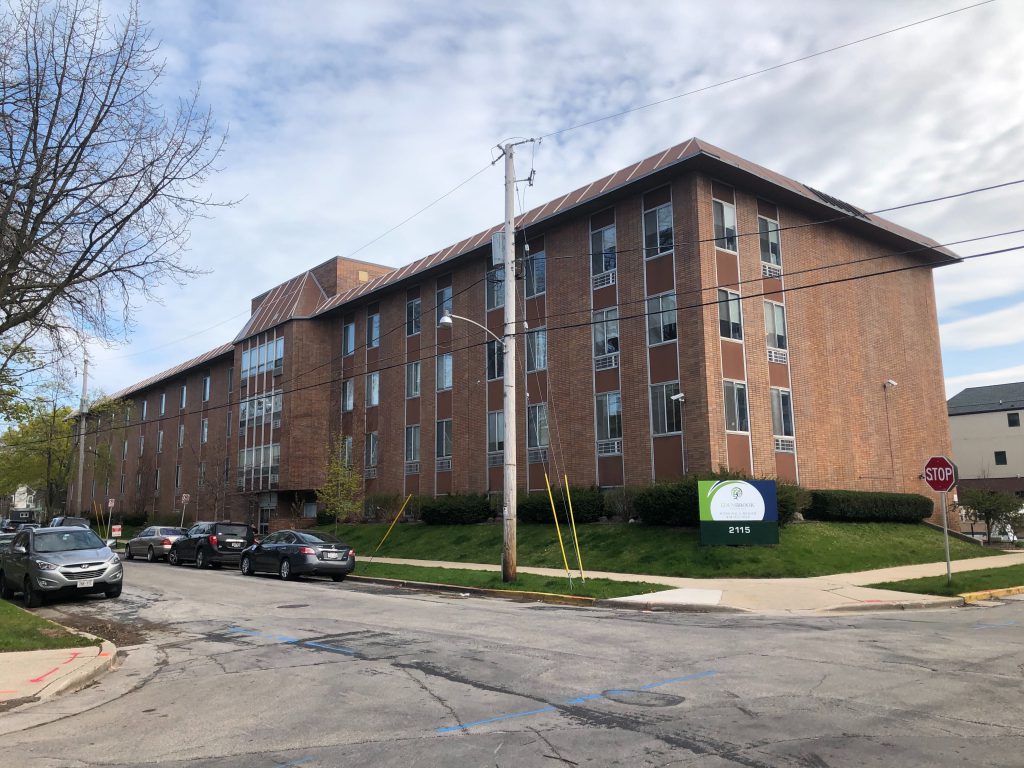 A nursing home on Milwaukee’s East Side. File photo by Jeramey Jannene.

COVID-19 cases rose sharply in Wisconsin nursing homes for both residents and staff members in October, and supplies of personal protective equipment (PPE) are running short in more than one-third of them, according to a new report.

The report, produced by the American Association of Retired Person (AARP), also documents acute nursing home staff shortages — shortages exacerbated by the spread of the coronavirus across nursing homes.

And while the report does not include assisted living facilities, advocates for long-term care residents and their family members say its findings raise concerns about those institutions as well.

“This is a tragedy that must be addressed,” said Sam Wilson, AARP’s Wisconsin director, in a statement accompanying the report. “Our state leaders need to act to keep residents safe and hold nursing homes accountable.”

The head of a state long-term care trade association doesn’t dispute the data, but objects to the report’s conclusions and recommendations.

“We have a problem in Wisconsin,” says Rick Abrams, president of the Wisconsin Health Care Association. “The problem isn’t with nursing homes or hospitals or assisted living — the problem is COVID-19.”

The report draws information from a dashboard that AARP maintains and updates every four weeks. The data comes from information that nursing homes report to the federal Centers for Medicare & Medicaid Services (CMS). The dashboard was developed by the AARP Public Policy Institute and the Scripps Gerontology Center at Miami University in Ohio.

The report’s new numbers cover the four weeks from Sept. 21 to Oct. 18. In Wisconsin during that time period:

The report also found that 39% of homes in the state reported they had less than one week’s supply of PPE in the Sept. 21-Oct. 18 period.

Advocates for nursing home residents and their families as well as for the long-term care industry agree that the data reflects the large surge of COVID-19 in Wisconsin, driven by community spread of the virus

In the short term, the situation appears likely to get worse. The most recent data in the report is already almost three weeks old, and the COVID-19 spread has continued unabated. “I think we’re going to see quite an uptick” with the next update, says Janet Zander, advocacy and public policy coordinator for the Greater Wisconsin Agency on Aging Resources (GWAAR).

In light of the report’s findings, AARP has called on the industry and regulators to make regular testing and adequate PPE for residents, staff, inspectors and visitors top priorities.

The PPE shortages that long-term care facilities reported were a surprise, says Dicks.

The state Department of Health Services (DHS) has been aware of PPE shortages for long-term care, especially for assisted living facilities, according to spokeswoman Jennifer Miller, who says that both the state and county health agencies have backup supplies of PPE that long-term care establishments can request.

Abrams says the nursing home operators his trade association has heard from have reported “shortages in pockets around the state, but it’s been far from widespread.” He adds, “What’s the real issue is the skyrocketing price and undependable supply chains.”

Regarding the report’s staffing recommendation, Abrams says, “We would love to be able to adequately staff. Don’t tell me there’s a problem — tell me what the solution is.”

While the report focuses on nursing homes — which are required to report to CMS the data that AARP uses to compile its findings — both Zander and Dicks say the findings also raise questions about assisted living facilities, which are regulated only by the state but not the federal government.

“We’re getting data and information about nursing homes, but we’re not getting it about the assisted living facilities,” Dicks says.

While DHS has reported nearly 700 deaths from COVID-19 of people in long-term care since it began tracking the virus early this year, fewer than half — about 325 as of last week — were in nursing homes, Zander observes. That suggests there have been “a significant number of deaths in assisted living facilities that may have not been discussed very much,” she says.

Nursing homes are already conducting federally mandated surveillance testing of their employees once or twice a week for the coronavirus, using antigen tests provided and paid for by DHS. Antigen tests are different from those used for the general public, such as at clinics or community testing sites. They produce results much more quickly than the conventional molecular tests, but they are also prone to more false negative or false positive findings.

Consumer advocates want to see surveillance testing extended to assisted living for residents and staff, but also visitors — in hopes that would allow people to safely visit family members. Dicks says that is complicated by the rapid test’s accuracy problems.

Abrams, whose trade association represents the assisted living industry as well as nursing homes, is skeptical about surveillance testing in assisted living, however.

“Assisted living won’t have those kinds of personnel and financial resources” required for such a program, Abrams says.

Surveillance testing in  nursing homes is “very labor intensive for the facility,” he says. “But it’s absolutely essential, especially given the situation in Wisconsin.” Nursing homes have been able to afford it, he adds, because of DHS funding, which has now been extended through the first three months of 2021.