By Howard Hardee and Keenan Chen, Wisconsin Center for Investigative Journalism - Nov 13th, 2020 09:40 am
Get a daily rundown of the top stories on Urban Milwaukee 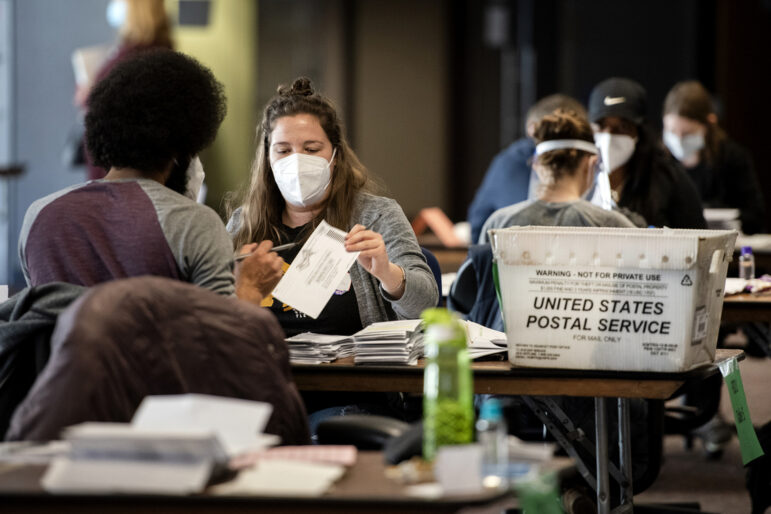 Workers count absentee ballots Nov. 3, 2020, at the Central Count facility in Milwaukee. A temporarily misplaced flash drive at the Central Count facility has led to unsubstantiated allegations of fraud in the counting of absentee ballots in Milwaukee. State and city election officials say there is no evidence of any tampering with vote totals. Angela Major / WPR

As a tornado of disinformation regarding the vote count has descended on Wisconsin, political spinmeisters have seized upon a lapse by a Milwaukee election officer to falsely claim evidence of voter fraud in a critical swing state decided by a little more than 20,000 votes.

About 3 a.m. on Nov. 4, as poll workers finished counting absentee ballots in Milwaukee, she delivered several flash drives containing absentee vote tallies to the Milwaukee County Election Commission — and realized that she had left one in a tabulator at the central counting center.

She called a member of her team, who retrieved the flash drive from the machine, and a police officer delivered it shortly afterward.

“I believe it is important to document that the flash drive was never left unattended and that the staff had remained in the room throughout the process,” Woodall-Vogg said, adding, “The incident bears no impact on the validity of the results.”

Nothing indicates that the contents of the flash drive were altered. Asked by Wisconsin Watch to address the incident, Reid Magney, spokesman for the bipartisan Wisconsin Elections Commission, said, “We are confident that there are no issues with the election results in Milwaukee.”

But a Nov. 6 story by the newly launched news website Wisconsin Right Now suggests that something secretive occurred with counting Milwaukee’s absentee ballots that “would prove to heavily weight toward Vice President Joe Biden.”

“We’ve met a brick wall of silence and stonewalling in our attempt to get more details about what happened around 3 a.m. when the drive suddenly couldn’t be located by Woodall-Vogg, according to our sources,” he writes.

As of Wednesday, the story had been shared nearly 1,800 times on Facebook — including by the Republican Party of Wisconsin and Bob Donovan, a former Milwaukee alderman — and posted by a QAnon-linked Twitter account with over 80,000 followers.

It also appeared on 4Chan, an anonymous messaging board frequented by trolls and conspiracy theorists.

A link between the misplaced flash drive and voter fraud is only implied by Wisconsin Right Now. The statement that the votes skewed toward Biden is true: Absentee ballots in Wisconsin — and nationwide — did favor Biden. But propaganda-pushing news aggregators such as The DC Patriot made the false connection explicitly.

“More evidence of voter fraud in Wisconsin has emerged, and this is huge,” reads the opening line of a clickbait-style story with the headline, “INSANE! Milwaukee Elections Head Misplaced Crucial Voting Flash Drive for Absentee Ballots.” 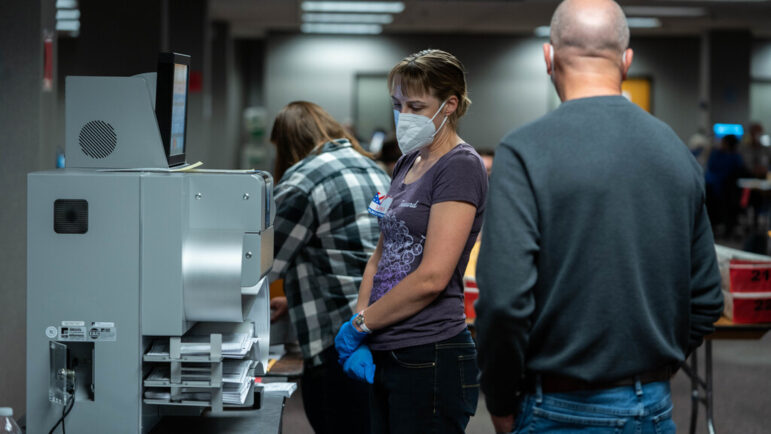 Election workers count ballots at the Milwaukee Central Count location after the polls had closed for the evening, on Nov. 3, 2020. Eric Kleppe-Montenegro For Wisconsin Watch

The DC Patriot story appeared on Parler, which has become a popular alternative for conspiracy theorists who feel constrained by Facebook’s crackdown on election misinformation.

In an email to First Draft, Woodall-Vogg refuted the online rumors and said the flash drive “always remained within the chain of custody of Election Commission staff and was never left unattended or lost. The data log on the flash drive conclusively proves that nothing was tampered with.”

The Wisconsin Elections Commission has been busy batting down such rumors. It recently released a rundown of common types of misinformation about the election.

Yet such allegations have gained traction among top GOP leaders, including Republicans in Wisconsin’s congressional delegation and Assembly Speaker Robin Vos, who has vowed an investigation by the Assembly’s elections committee.

“I am directing the committee to use its investigatory powers … to immediately review how the election was administered,” Vos said in a statement. “With concerns surfacing about mail-In ballot dumps and voter fraud, Wisconsin citizens deserve to know their vote counted.” 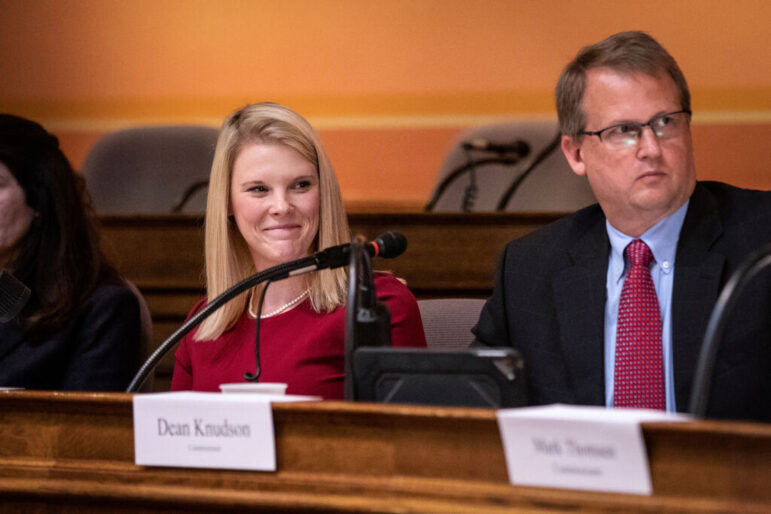 Wisconsin Elections Commission Administrator Meagan Wolfe, left, says her agency has seen no credible evidence of widespread or systemic problems in the Nov. 3 election. Despite that, rumors of vote fraud persist in Wisconsin. Wolfe is seen during a September 2018 meeting of the Elections Commission with Commissioner Dean Knudson. Emily Hamer / Wisconsin Watch

“We have seen unfounded allegations that clerks and poll workers stopped counting, that they mysteriously found absentee ballots in the middle of the night, or that all the votes on absentee ballots were only for one candidate,” Wolfe said. “It’s just not true.”

Wisconsin Right Now only recently materialized as a news source. The organization’s Facebook page was created on Aug. 17, and its website’s earliest stories date back to around the same time.

News websites that suddenly appear ahead of a major event like an election should be a red flag for discerning readers because a couple of months isn’t long enough to earn trust on issues as important as the legitimacy of the vote in Wisconsin, said Shaydanay Urbani, a writer and researcher with the global fact-checking organization First Draft.

“If you’re looking at a source that’s new, then of course that means that they haven’t had time to demonstrate their reliability,” she said. “But if you’re seeing a source that is not only new but has also popped up during a large news event, like the U.S. election, that should be another red flag, because it makes you wonder what their motivations are.”

Wisconsin Right Now was co-founded by Wisconsin journalist and University of Wisconsin-Milwaukee journalism senior lecturer Jessica McBride, who has more than 7,400 followers on Facebook.

Readers should also be skeptical of a news source that isn’t completely transparent about how it’s funded, Urbani said.

“We are self-funded and, thus, an independent voice,” Wisconsin Right Now says on its “about” page. “Our mission is to give you the news you won’t see elsewhere.”

Recent opinion headlines include “We Name Names: Did Wisconsin Democrats Rig Election Against Trump?” and “Hunter’s Laptop: The 7 Debate Questions That Weren’t Asked.”

Piwowarczyk is listed as the site owner and as having “final editorial control over all stories on this site.” A former police officer in Glendale, Wisconsin, he doesn’t cite experience in journalism, but points to his work as a real estate adviser.

Wisconsin Watch asked Piwowarczyk about the potential for his story to undermine public confidence in the democratic process.

“Our reporting was 100% factual in all respects, as verified later by Woodall-Vogg’s letter,” he said in an email. “I suggest you also focus on verifying the facts, rather than trying so hard to spin a narrative.”

Wolfe said the state Elections Commission has investigated a variety of allegations around the Nov. 3 election and, “At this time, no evidence has been provided that supports allegations of systemic or widespread election issues.”

Howard Hardee is a Madison-based journalist who created a misinformation toolkit for consumers funded by the Craig Newmark Philanthropies. He is a fellow at First Draft, an organization that trains journalists to detect and report on disinformation. Wisconsin Watch (wisconsinwatch.org) collaborates with Wisconsin Public Radio, PBS Wisconsin, other news media and the University of Wisconsin-Madison School of Journalism and Mass Communication. All works created, published, posted or disseminated by Wisconsin Watch do not necessarily reflect the views or opinions of UW-Madison or any of its affiliates.