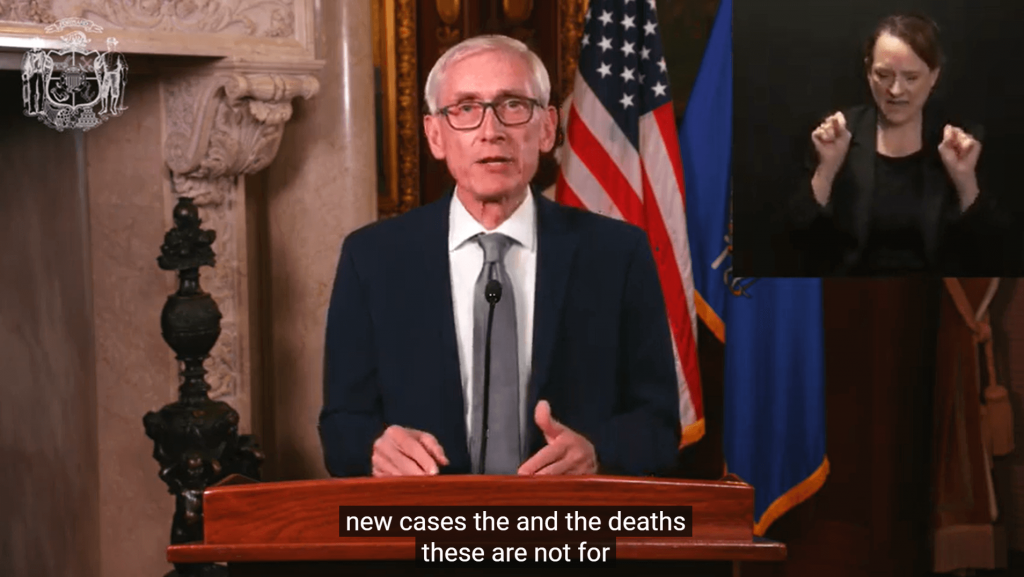 “We must get back to the basics of fighting this virus, just like we did last spring, and it starts at home,” Evers said in a 10-minute address broadcast on Wisconsin Eye as well as on YouTube and Facebook.

The new executive order resembles the Safer at Home order that the Evers administration had in place from March 25 to May 13, when it was thrown out by the Wisconsin Supreme Court, but with one big difference: Its instructions are recommendations — not requirements.

People “should stay home as much as possible,” and they “should take precautions” that include avoiding indoor gatherings with people not part of their immediate household, physical distancing of at least 6 feet from others and wearing masks.

The order also states: “All businesses are strongly encouraged to take steps to protect their staff, customers, and their communities,” including requiring masks, expanding work at home options and holding meetings online or remotely.

The only penalties are the damage to the state’s economy and the lives and health of Wisconsin residents.

Unchecked, the number of people with the virus will soon top 300,000, the governor said. Deaths will double by the end of the year.

“Each day this virus goes unchecked is a setback for our economic recovery,” Evers said. “Our bars, restaurants, small businesses, families, and farmers will continue to suffer if we don’t take action right now — our economy cannot bounce back until we contain this virus.

Evers also announced he will introduce legislation shortly “to make sure we have the resources ready for those who need it,” but did not offer specifics.

Assembly Speaker Robin Vos told reporters Tuesday that he called Evers after the speech to seek a meeting with the governor, according to the Milwaukee Journal Sentinel.

The governor’s brief address, which went live shortly after 6 p.m., came on the same day Wisconsin broke another record for positive COVID-19 tests. The state Department of Health Services (DHS) reported Tuesday 7,073 new confirmed cases of COVID-19, for a total of 278,843 since the start of the pandemic.

There have been 2,395 deaths attributed to the coronavirus, including 66 new deaths on Tuesday. That rate could rise, the governor noted.

“The Institute for Health Metrics and Evaluation estimates 5,000 Wisconsinites could be lost to COVID-19 by January 1st if no further actions are taken to get this virus under control,” Evers said.

He added: “Wisconsin, this is serious. This crisis is urgent.”

The Wisconsin Hospital Association reported Tuesday 2,070 state residents are currently hospitalized. It was a new record and the second day in a row that the number has topped 2,000.

Of those, 418 people are in intensive care units. More than 90% of the state’s ICU beds are full — including both COVID-19 patients and patients with other illnesses.

“Many hospitals are at or near peak capacity,” Dr. Mark Kaufman, chief medical officer for the hospital association, told the Wisconsin Examiner Tuesday. As a consequence, hospitals are paying close attention to elective procedures, in some cases postponing or canceling them and reassigning staff to cover shortfalls.

With the continued escalation in cases, “the math and the basic science would tell us that we will likely see a continued rise in hospitalizations for at least the next 10 to 14 days,” he added.

Staff — and nurses in particular — represent “the biggest pinch point” for hospitals, not the availability of hospital beds themselves, Kaufman said.

Because of continued community spread of the virus, healthcare workers in their everyday lives away from work have become exposed to people who have tested positive. The exposed workers — who might or often might not have been infected — must then quarantine, typically for up to two weeks, to ensure that they aren’t infected and can’t pass the virus on to others.

To help ease staffing shortages, the state has temporarily relaxed licensing requirements to make it easier for healthcare employers to hire workers from out of state, Kaufman said. “The challenge is that the pandemic is countrywide. Hospitalizations are soaring around the country. So the ability to find healthcare workers is limited, in that everybody needs extra help.”

Good news about medications for treatment and the promise of a vaccine “aren’t going to help this winter — we need to go back to the public health measures. We need to double down on them,” Kaufman said.

“The pandemic is just raging through Wisconsin, and what we need to do is focus on ourselves: We need to wear a mask, we need to physically distance we need to wash our hands frequently, we should limit private indoor gathering. If we’re symptomatic, we need to get tested. And unless there’s a contraindication you should get vaccinated for influenza.”

Evers’ Tuesday evening address capped a day of messaging aimed at driving home the seriousness of the pandemic.

“Stop the Spread,” a coalition that includes more than 100 business groups, healthcare organizations, organizations representing county and local governments and other advocacy groups, launched a new public service announcement campaign with ads that tell viewers, “unless we make changes, there will be more deaths we could have prevented. You can change this.”

Sen. Tammy Baldwin posted a video on her official YouTube account. “We can’t allow this deadly virus to keep spreading, and we cannot allow more of our friends, neighbors, and frontline healthcare workers to keep getting sick, or worse,” Baldwin states in the recording. “We can beat COVID-19, but we have to work together in order to protect ourselves, our loved ones, and each other.”

The most politically pointed statement Tuesday came from Dane County Executive Joe Parisi, who sent a letter urging Republican leaders of the state Assembly and Senate “to come to the table with Governor Evers to develop and enact a statewide plan to address the COVID-19 crisis that has exploded across our state, inundated our hospitals, and resulted in immeasurable suffering in Wisconsin communities.”

Parisi’s letter called for a 30-day statewide limit on gatherings in bars and restaurants, asserting that similar restrictions in Dane County had helped slow the progression of the virus in the county.

“Unfortunately, the past several months have been marred by legal action and apathy, creating public confusion,” Parisi wrote. “Action, or in this case inaction, has consequences and it’s visibly on display in every hospital in this state right now.”

Evers, however, refrained from directly criticizing the Legislature or its leaders, although he has done so in past daytime media briefings.

His only political jab was at the Supreme Court for its May 13 ruling striking down the Safer at Home order, “a decision that hamstrung our ability to respond to this virus by using the tools supported by science and public-health experts.” Even that, however, was brief and mild in comparison with some of his past references to that ruling.

The governor noted that the state’s allotment from the federal CARES Act expires Dec. 31. Evers appealed to state residents to contact their members of Congress for more aid to the state — without which “our state will have to foot the bill for our response after the New Year.”

But for most of the talk, Evers sought to reiterate and amplify the message he’s been stating and restating in the media briefings he’s conducted at least once a week with DHS officials: that the people of Wisconsin must take the pandemic seriously and commit to measures that promote public health.

Evers urged listeners to “cancel the happy hours, dinner parties, sleepovers, and playdates at your home,” and to replace dinner dates with friends or family members outside the household with virtual visits — including holiday gatherings.

Leave home only for “essential needs or errands” — trips to the doctor, the grocery store, the drug store or to get tested for COVID-19, he said.

“And if you have to go out, please wear a mask and stay six feet apart,” Evers said. “Wearing a mask is not a political statement — it’s a sign to coworkers or the strangers you pass in the grocery store that you care about them, and they care about you, too.”

An appeal to community

Both the approach Evers took Tuesday night, and the circumstances in which he finds himself, echo the tone and style that President-elect Joe Biden confronted on Monday when he named the new COVID-19 advisory board he has assembled to address the pandemic once he takes office in January.

Both leaders have been constrained by political dynamics. Evers faces Republican leaders of the state Legislature who have refused to meet since April to consider new legislation that would address the pandemic, despite pleas from the governor, Democrats and constituents.

Biden, whose first day in office is more than two months away, is dealing with an outgoing administration that has thrown sand in the machinery of transition by refusing to concede the election after losing  by more than 4 million votes and failing to hand over information, funding, and office space to the administration-in-waiting, as other outgoing presidents have always done. President Donald Trump has also politicized the pandemic, criticizing public-health precautions and holding superspreader rallies.

In the face of those dynamics, both Evers and Biden have repeatedly sought to stress there is no reason to politicize wearing masks to stop the spread of the virus — a widely recommended public health measure. “It doesn’t matter your party, your point of view. We can save tens of thousands of lives if everyone would just wear a mask for the next few months,” Biden said Monday after meeting with his pandemic advisors. “Not Democratic or Republican lives — American lives.”

At the time it aired, according to the governor’s office, Evers’ speech had 31,000 viewers on YouTube and another 13,600 live viewers on Facebook with an additional reach of 36,000 people. Phillip Rocco

“This wouldn’t be the first time that a government had issued an order that is essentially advisory,” Rocco tells the Wisconsin Examiner. “There are plenty of situations in which the power of government operates through, not binding regulations or mandates, but through the power of information and advice.”

But the effectiveness of that advisory approach, particularly in public health, “depends on an implicit partnership between other actors in society and the state, as well as trust in government and some sort of general consensus in the meaning of the order,” Rocco says.

If the governor’s message is absorbed by local health departments and encourages them to tighten their health restrictions, and if employers impose public-health measures — for example, with restaurants voluntarily shutting down indoor service and shifting entirely to carry-out and pickup orders — it might be able to succeed, he observes.

“The thing that is disturbing — and has been since the beginning of the pandemic — is how epistemically fractured public opinion is on the state of the virus,” Rocco says. “The fact that there’s a lot of people out there who simply disbelieve the reality of the public-health risk suggests that there could be barriers to the effectiveness of this order.”