Central count operation will last until at least 3 a.m. with three shifts of 400 workers each.

When 173 polls opened across Milwaukee at 7:00 a.m., another election operation sprung to life inside a downtown office building. But while the polls will close at 8:00 p.m., the downtown operation is expected to continue operating until 3:00 a.m. or later.

Milwaukee’s central count operation spans the 62,000-square-foot fourth floor of the otherwise empty office building at 501 W. Michigan St. The city leased the space, starting with the April election, to handle the surge in absentee ballots and needs to distance workers amidst the COVID-19 pandemic.

Three shifts of 400 workers will spend the day sorting and opening ballot envelopes, flattening ballots for machine processing, numbering them and processing them through 13 high-speed tabulating machines. Watching them are dozens of media members and poll observers, including Wisconsin Elections Commission chair Ann Jacobs and at least one observer with a pair of binoculars. The public can also watch a live stream video of the facility.

Milwaukee is one of 39 Wisconsin municipalities that uses a central facility to process absentee ballots instead of routing them to polling places. The strategy allows the city to maintain its drop boxes through election day and route all day-of mail deliveries to a central facility instead of having to send the ballots to 173 different polling places. “We believe it is more efficient, effective and secure to use a central count on election day,” said Milwaukee Election Commission executive director Claire Woodall-Vogg in October.

But with over 165,000 sealed ballots in hand as the day started and thousands more expected to arrive by mail or via drop box, the work will take hours to complete. State law prevents municipalities from processing the ballots, including opening the envelopes, until polls open on election day.

As of 10 a.m. November 3rd, things were operating smoothly according to city officials.

“So far we are not having any issues, everything looks good upstairs,” said Woodall-Vogg at a press conference held in a plaza outside the building. “Our poll workers turned out in phenomenal numbers today.”

“No news is good news,” said Mayor Tom Barrett. “This is the day we have been waiting for.”

Get a daily rundown of the top stories on Urban Milwaukee
The 165,000 ballots received so far exceeds the 50,000 received in the August primary, and the approximately 52,000 cast in the 2016 general election.

“This shatters all records for early voting in the city of Milwaukee,” said Barrett.

In-person results are transmitted from the polling place to the Milwaukee County Clerk‘s office via a modem in the on-site equipment, often within two hours of a polling place closing. Absentee results are submitted when an entire municipality is completed.

In August, the 50,000 absentee ballots took until 2:30 a.m. to complete. Why won’t things take three times as long in November? The answer in large part relies on an expansion of the number of tabulation machines, which cost in excess of $100,000 each. The city went from four to 13 with support from a federal grant said Woodall-Vogg. Improvements in post-sorting ballot storage were also made.

But one thing is largely out of the city’s hands — the number of absentee ballots that come in just before the 8:00 p.m. deadline.

Woodall-Vogg cited the up to 2,000 late-arriving ballots in August as the key driver in the late results with that election. How many will arrive at the last minute Tuesday? That remains to be seen, but the city is emptying its 15 drop boxes hourly and the United States Postal Service is expected to do a final sweep of each of its facilities at 6:30 p.m.

Wisconsin offers same-day registration for voters looking to still vote in an election. Voters still possessing an absentee ballot should leave it at one of 15 drop boxes by 7:30 p.m. More information on polling places, identification requirements and drop boxes can be found on the city’s 414 Votes website.

Seeing any issue on election day? Report it to info@urbanmilwaukee.com. 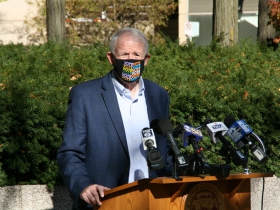 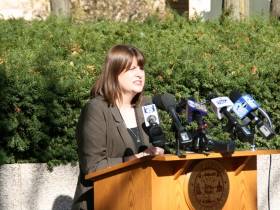 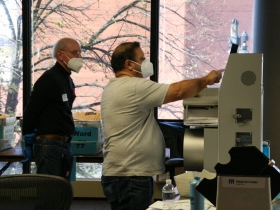 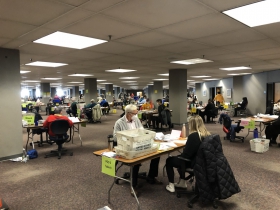 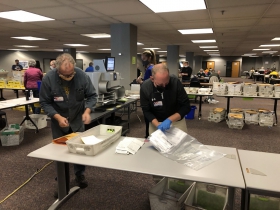 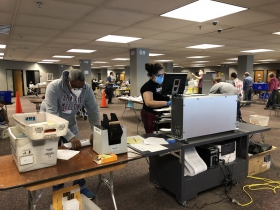