Owners raising money for non-profit that works with homeless youth. 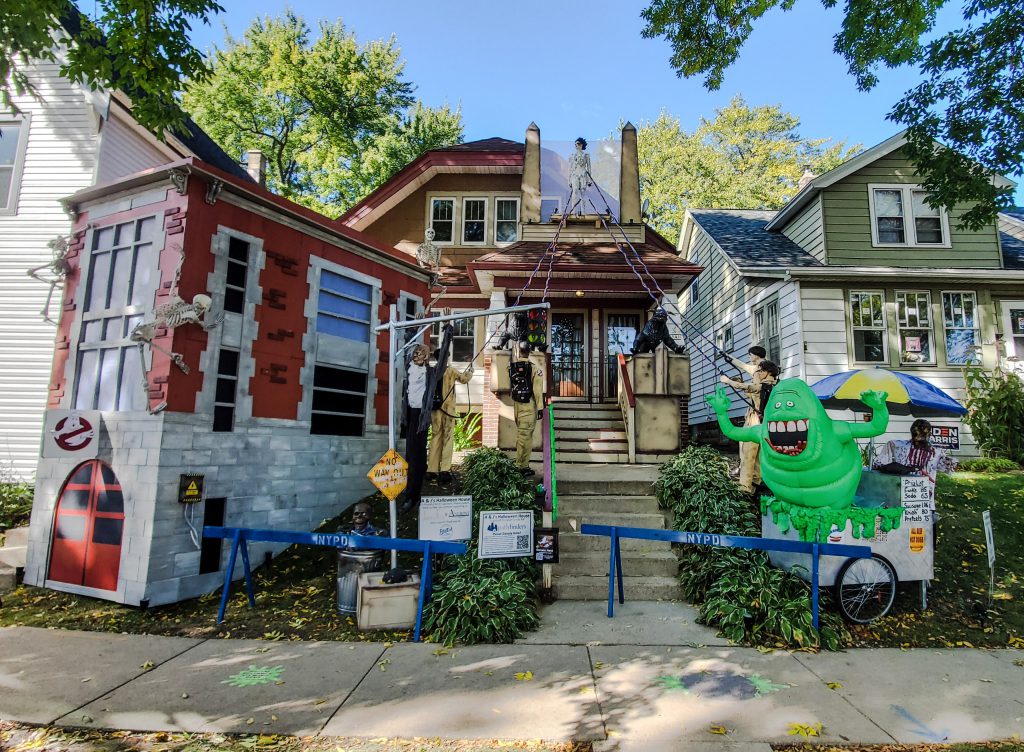 A Bay View couple is using an extravagant Ghostbusters Halloween display to raise money for a local charity that works with homeless youth.

Andy Reid owns the house at 2943 S. Clement Ave. with his husband, which they call A&J’s Halloween House. Their hope is that people enjoying their decorations will donate to Pathfinders, a nonprofit organization that connects chronically homeless youth to sustainable and safe housing. The organization emphasizes working with LGBTQ youth and youth with disabilities. Reid and his husband hope to raise $5,000.

The yard haunt features a replica Ghostbusters firehouse, Slimer popping out of a hot dog cart and the crew from the first film snaring the antagonist with their nuclear-powered Proton Packs. The display stays open from dawn to dusk every October with viewpoints from the sidewalk and the street, complete with social distancing viewpoints and available hand sanitizer.

The display stands in its entirety at any time of the day except for projections that light up the firehouse windows at night. The main viewpoints are the home-built firehouse and the final battle on the front steps with the Ghostbusters crew and Gozer. Police barricades, an inflatable Slimer and gargoyles protect the entrance. Onlookers can stand on the splat stickers spaced eight feet apart on the sidewalk or view the show from their cars. 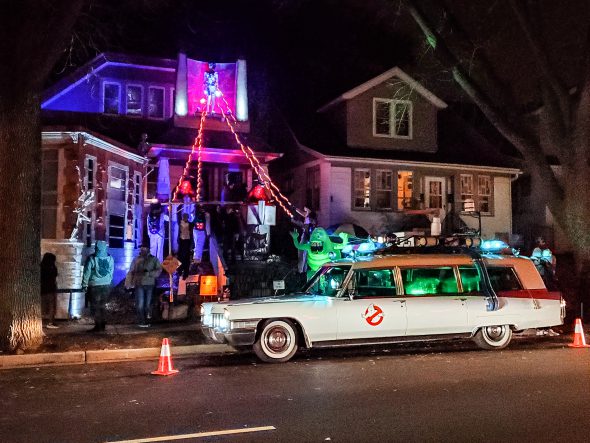 The display’s theme changes each year, and the original Ghostbusters theme was chosen in lieu of the new film that was postponed to 2021. Reid, 43, saw the first Ghostbusters when he was a “young’un,” and it remains his favorite out of the three films. After growing up decorating his own childhood home during the holiday season, he decided to carry on the tradition when he got his own place.

“I started with a typical graveyard scene and it progressed,” Reid said, “Like hey, let’s do something different every year.”

The haunt is free for everybody to enjoy. Props and buildings are funded through the owners’ businesses. A&J takes donations through drop boxes and QR codes that send money directly to Pathfinders, a nonprofit organization that connects chronically homeless youth to sustainable and safe housing. The organization emphasizes working with LGBTQ youth and youth with disabilities.

Of all of the charities A&J has worked with, Reid says Pathfinders has been the most receptive. “They gave us the education of what they do. They embraced us and appreciate what we did for them,” he said. “It’s a great charity that takes care of so many children.”

Reid said he noticed more people have donated during this year than ever before and wants people to continue doing it. He also said he wants people to be safe and courteous to other people when they visit the house on Friday and Saturday night. On Sunday night, the display will be packed up and stored until next year.