Service Union Rallies To Get Out The Vote

“Our work is essential and so are our votes." Union seeks Trump's defeat, $15 minimum wage. 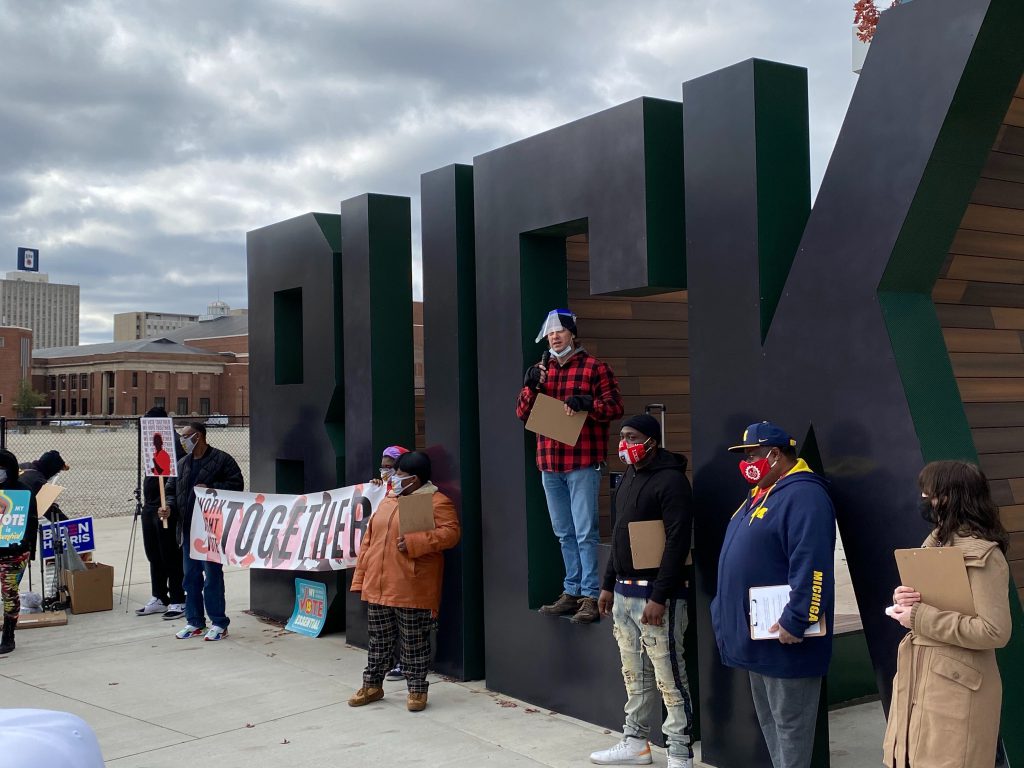 Milwaukee Area Service and Hospitality, the union that represents workers at the Fiserv Forum, held a rally outside the arena Saturday morning encouraging voter participation in the upcoming election — with an emphasis on the importance that working class voters turn out.

A couple dozen MASH members and minimum wage advocates, among others, gathered for the rally to discuss the importance of the upcoming election, and also to vote. 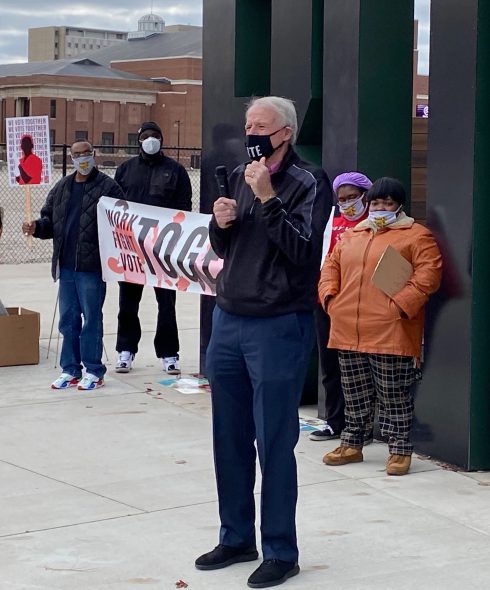 The plan was that, after the rally, the crowd would walk to the nearby early voting location at MATC and vote. But that didn’t end up happening, because nearly everyone at the rally had already voted or requested a ballot.

Halfway through the rally, Mayor Tom Barrett happened upon the group outside the forum. He said he saw the crowd and thought, “I gotta stop by and see what it was.” Then, recognizing the union and seeing it was a rally to get out the vote, said “This is what I love to see.”

Barrett addressed the crowd telling them, “I have to give you the news that, as of this morning, we have now had, in the City of Milwaukee, over 100,000 people have voted. There are about 315,000 registered voters, so we’re at about 31 percent.”

Barrett said this election is a fight for racial justice and equality, for $15 an hour. But, he said, “You gotta be in the game.” That means voting. “That’s the message we have to send over the next 10 days,” he said.

Peter Rickman, president of MASH, swore the mayor’s cameo at the rally was not planned.

Rickman said defeating Donald Trump in this election is an important step in the continuing fight for better wages and jobs for the working class and service industry workers.

Especially given the ongoing COVID-19 pandemic, he said. Service industry workers that still have jobs face danger from the virus every day at work. And for those still jobless, Rickman added, it’s because of the failures of Republican officials from Trump on down through Senate Majority Leader Mitch McConnell, Sen. Ron Johnson and State Rep. Robin Vos.

Wanda Lavender, a minimum wage advocate with the Fight for $15, has worked at a Popeyes in Milwaukee for four years. She makes $12 an hour as a manager. And, “Like many black workers who are stuck in low paying jobs,” she said. “I kept going to work through this pandemic.”

“Working at fast food has never been easy, but this pandemic brings a whole new level of stress,” she said.

Lavender said that workers like her worry every day about their safety, and whether they may be bringing the virus home with them when they leave. “It used to be that we worry about a broken fryer, or grease burns,” she said.

And despite the new, even worse conditions, workers like Lavender face precarious job security. When Lavender had a cough, and worried she might have COVID-19, she still had to work. “They said if you take time off you might as well stay gone because you’re not gonna have a job to come back to.” 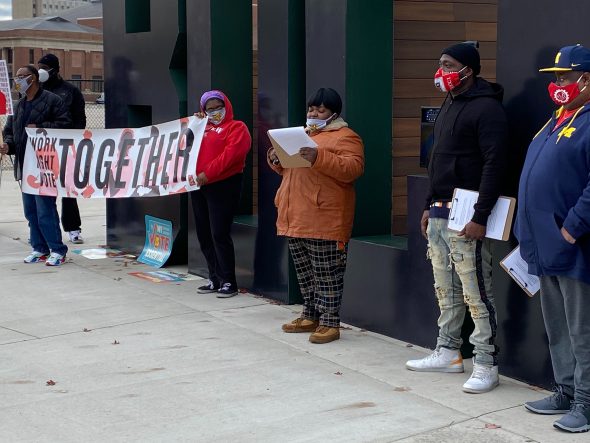 Wanda Lavender speaks to the crowd at MASH rally.

“No one should be forced to risk the health and safety of themselves and their family members for a paycheck that you can barely make it on,” she said.

It’s service workers that are keeping communities running, she said, keeping people fed, caring for the elderly, caring for children, cleaning hospitals, stocking grocery stores. “Our work is essential and so are our votes,” she said.

In early 2020, MASH finalized a labor contract with the Bucks organization for service industry workers at the Fiserv Forum, securing $15 an hour for all employees, regardless of the company or contractor they worked for at the arena. Anthony Steward, a MASH member that worked at the forum, said, “But before our contract could take effect, Covid hit. And it hit us hard, we lost our jobs temporarily because of the pandemic and because of failures of Republicans.”

One of those employees was Troy Brewer. “Before the pandemic I worked three jobs,” he said. “Not by choice, but out of necessity.”

Back when the world was normal — before the pandemic — it wasn’t working for everyone, Brewer said. Normal meant racial inequities; normal meant working full time for poverty wages. “We can’t go back to normal, we have to build something new.”

Organizing the workers at Fiserv and successfully bargaining for a $15 minimum wage is proof that collective action can make change for the better, union leaders believe. That’s why MASH held the rally to encourage voting.

It’s working class voters like Brewer and Lavender that are going to change the country during this next election, and after it, Rickman said. First step: defeat Trump and Republicans up and down the ballot. Next step, “organize and struggle and advance our cause,” he said. Because working people can’t count on politicians to do it for them. “The working class is in the lead here.”

As Lavender put it, “It was the power of workers in the streets making demands and challenging public opinion that has pushed politicians and candidates like Joe Biden to support a $15 minimum wage and union rights.”