A Tale of Two Urban Infills 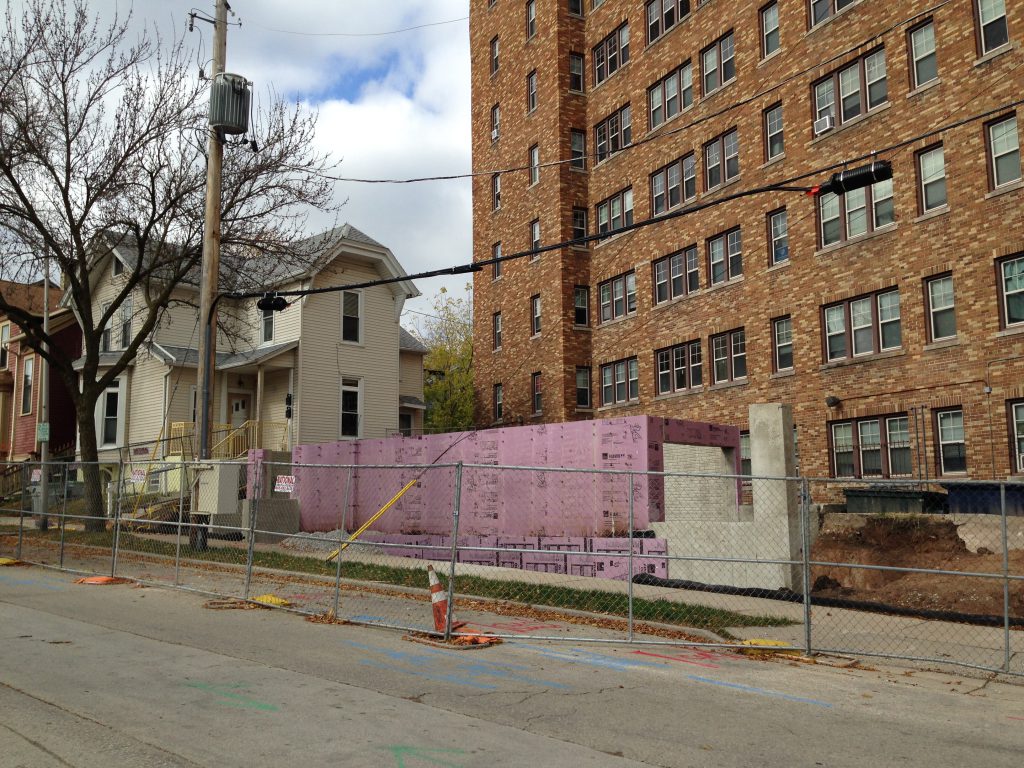 Two residential infill projects are in the early stages of construction, a mile apart in two of the city’s oldest neighborhoods, where empty lots are rare. Yet they share a most unusual distinction when it comes to the land they are being built upon.

So, What do the Lots Have in Common?

According to the National League of Cities: “Urban infill is defined as new development that is sited on vacant or undeveloped land within an existing community, and that is enclosed by other types of development.”

Most of the recent infill projects in the Lower East Side and Riverwest have been constructed on “vacant” lots that had previously held structures. This can be readily seen when the land is excavated for foundations for the new development, and old brick or even older stone foundations are uncovered, often interred with the charred timbers of the home that had once been there. Excavations in the Historic Third Ward, where a fire on October 28th, 1892 destroyed some 440 buildings, unearth spoil such as you would expect to find in a coal mine.

But occasionally excavation contractors strike comparative gold when they start scooping the soil. They hit what they call “Virgin Dirt,” an evocative term for soil that had last been disturbed 15,000 years ago during the retreat of the glacier and remaining to this day “undeveloped.” Amazingly, each of these two sites, both located in old and densely populated neighborhoods have never been built upon. Since the 19th Century, the owners have been paying taxes on dirt.

An inspection of the Sanborn Property maps of 1894 and 1910 shows the undeveloped, irregularly shaped lot at what was then 312 Lyon St., at the corner of what is now N. Franklin Pl. Lyon takes a curious northeast turn in its easternmost block here, at the corner of N. Franklin Pl. which accounts for the lot’s unusual shape, making it less practical for construction than its more rectangular neighbors. In both 1894 and 1910, the property was entirely surrounded by buildings. It was infill just waiting to happen! 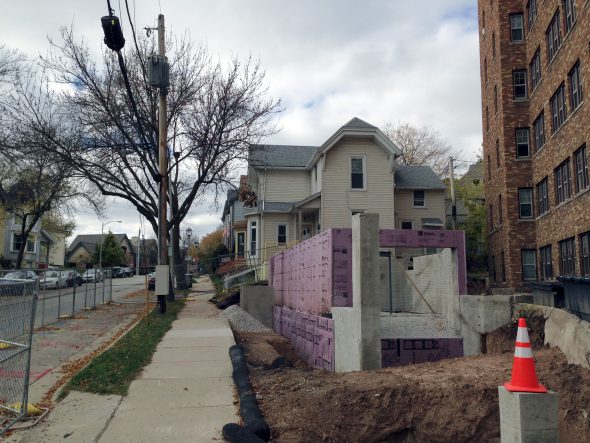 Since 1930, the lot immediately to the north has been the Buckingham Apartments, a nine-story building at 1505 N. Franklin Pl. that once towered above its neighbors, before it got competition from lakefront high rises two blocks to the east. To the casual observer, it would seem that the lot was part of the apartment building’s property, but it has always been associated with the duplex to the west.

I spoke with Maksim Tuzhilkov, who bought the duplex in 1999 and has lived there since. He is the owner of Advantage Auto Parts, LLC., at 11840 W. Hampton Ave., which was established after World War II as Hampton Auto Salvage. Since buying the firm in the early 2000s, it has expanded to include Service, Body, Sales, Glass and Towing to its repertoire. He says he plans to occupy the new home he is building. Unlike his current residence, this one includes a slab-on-grade garage, a suitable amenity for an individual in his business.

According to the National League of Cities:

The term “urban infill” itself implies that existing land is mostly built-out and what is being built is in effect “filling in” the gaps. The term most commonly refers to building single-family homes in existing neighborhoods.

That is the case in this instance. Most infill projects in the Lower East Side have been single family or duplexes. 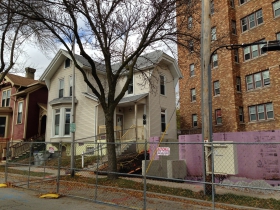 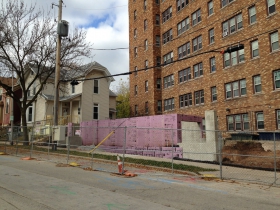 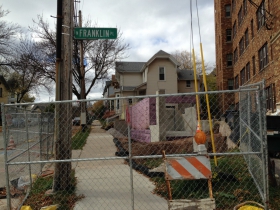 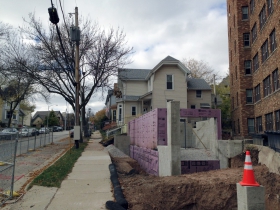 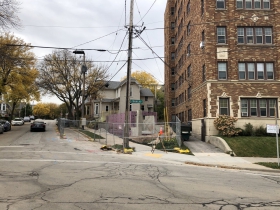 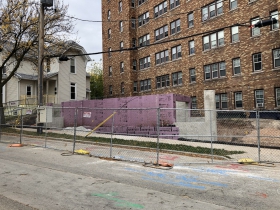 Like its counterpart to the south, the lot at the northeast corner of N. Humboldt Blvd. and E. Wright St. has never had a residential structure built upon it. In 1894, there was a single building on the property, which then measured about 200-feet by 600-feet, interrupting Dousman St., Staley Pl. and Gordon Pl., running all the way to the railroad tracks to the east, if not to the river itself. Yet the north half of the block, fronting on Clarke St., was filled to capacity with houses, from Humboldt to the tracks,  as was the block to the south along Wright St. Most of these remain. By 1910, the lot had become the 30-parcel Kopmeier’s Subdivision, with a couple of homes to the north, and the building that now houses The Gig across the alley to the east. 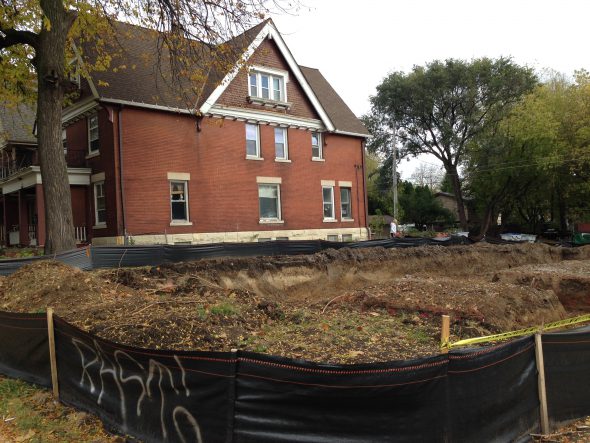 By 2007 the garage was razed, and replaced with an eight-car parking lot, paved in asphalt. In September of that year, a Declaration of Condominium was made for the site, and plans were drawn up for a four unit building with units priced at $224,900. Nothing materialized from these plans, as the Great Recession loomed. The property was listed as an attractive development site at $174,000 in 2016. There were no takers.

Now, reborn as the location of a 4-unit apartment, site work is finally underway in the Virgin Dirt of Lot 9, Kopmeier’s Subdivision. It’s easy to spot, being directly across the street from the controversial and un-permitted 6,000-square foot concrete parking lot that occupies a formerly undeveloped (but grassy) lot at 2507-2513 N. Humboldt Blvd. There is also yet another vacant corner lot at this intersection — it is at the southwest corner of N. Humboldt Blvd. and E. Wright St., used as surface parking. 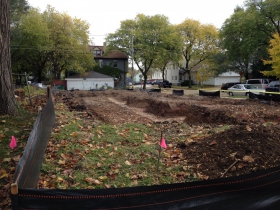 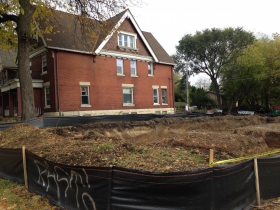 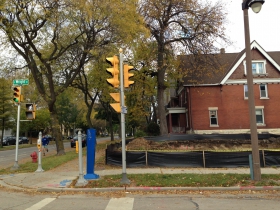 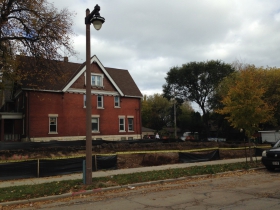 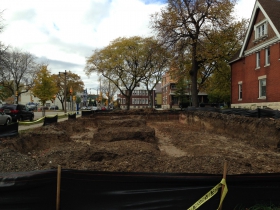 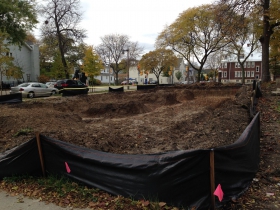