No more runoff into the sewer system. A look at the Lower East Side's best parking deal 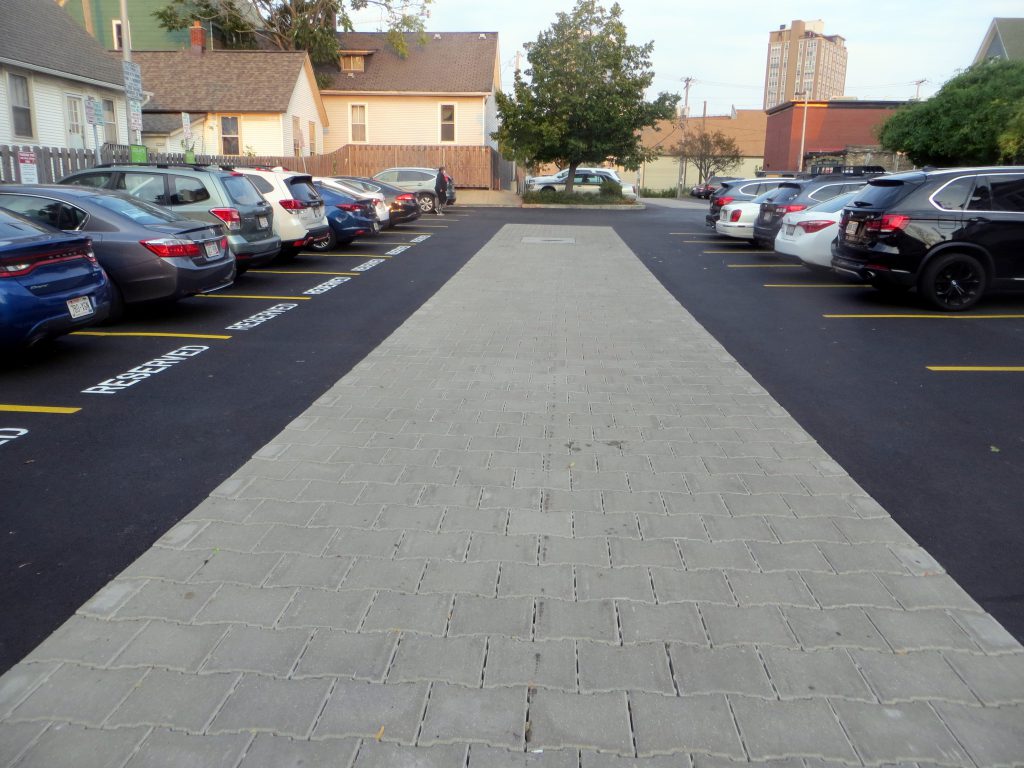 The Brady Street Public Parking Lot is located between N. Arlington Pl. and N. Warren Ave., with only pedestrian access to its namesake street. It runs east-west, hidden behind the shops and apartments of the Passeggio on Brady Street. The city-owned lot was developed in tandem with the Passeggio in 1996, with four spaces reserved for its residential tenants. The lot also is home to two Zipcars, ready and waiting at $12 per hour, and two electric charging stations, neither of which has yet been installed. There are 51 metered spaces for the public, but on a recent visit, no meters were attached to their mounts, so parking was free.

The parking surface itself is immaculate, and freshly laid as part of a green infrastructure project started in June and slated for July completion. Although such minor details as the installation of a means for the collection of parking revenue are not yet in place, the heavy work has been done, and a parking lot is, by definition, something you build from the ground up.

The driving lanes are finished with new grey permeable concrete pavers, surrounded by a contrasting fresh coat of black asphalt at the parking spaces, all nicely set off in reflective yellow paint, including some designating ADA parking spots. In addition, the Department of Public Works upgraded the lighting, according to Brian DeNeve, DPW Marketing and Communications Manager.

“We calculated that up to 26,672 gallons are captured by the pavers per rain event at the Brady St. location,” he writes Urban Milwaukee in an email message.

According to DeNeve, “The bid cost of the project was $185,892.00 paid 100% from city dollars.” The contractor was American Sewer Services, which fired a worker who had a Ku Klux Sign and Confederate Battle Flag decal on his cooler while working on a city job in December 2017, as Urban Milwaukee reported.

Previously, workers had been seen on a job site bearing firearms.

How to Pave, Permeably

The parking lot was done in two stages, and operated at half capacity during the project, so as to keep money flowing through the meters, which still were in place at the time. Workers excavated the areas to receive the permeable paving, amounting to two good-sized rectangles that take up about a third of the total surface area. The excavations were filled with gravel, and a mesh was laid above that area, which does the real work of capturing water for slow release. The mesh would provide a base for the top layer. That traffic surface consists of concrete masonry units with serrated edges, leaving a wide enough gap between to allow storm water penetration. It will be interesting to see how it handles shoveling and plowing and the eventual melt of spring, which can also lead to sewer overloads. The system should be less subject to potholes, and more readily repaired should they develop.

According to an email from DeNeve:

This lot is part of a broader City strategy as outlined in the City’s Comprehensive Green Infrastructure Plan.  The combination of too much hardscape and the increasing risk of extreme storms from climate change leads to flooding risk. So we are working to incorporate natural solutions into DPW, Milwaukee Public Library, and MPS lots to help better manage storm water and improve Milwaukee’s environment.

The push for such green infrastructure as permeable paving, green roofs and the like has been led by the Milwaukee Metropolitan Sewerage Commission (MMSD) as a more cost effective way to reduce stormwater runoff into the sewer system than building yet another Deep Tunnel, and the City of Milwaukee has worked cooperatively with the MMSD on this goal.

Note: I contacted Megan O’Connor, the city’s liaison for the project asking for an update on the meter and electric charger situation, but did not hear back by the time of publication. 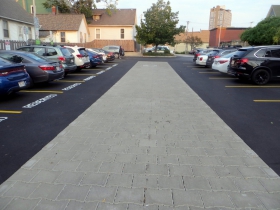 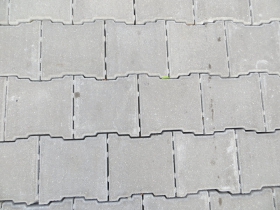 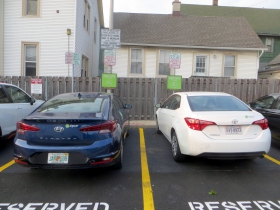 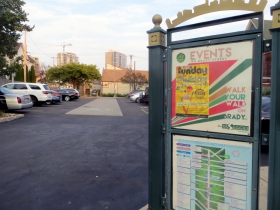 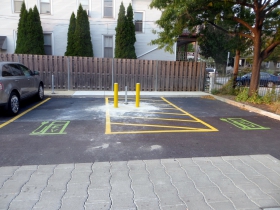 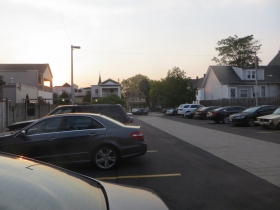