Why won’t Vos and Fitzgerald support measures to contain the state’s pandemic surge?

The August Marquette Law School Poll of Wisconsin voters left little doubt that the use of face masks had become a partisan issue in Wisconsin. One question asked whether masks should be required in all public places. As the graph below shows, the voters agreed by a better than 2 to 1 margin.

However, the responses varied substantially according to the voters’ partisan leanings. While Democrats agreed by an overwhelming 97% to 1%, Republicans disagreed by 57% to 39 percent. 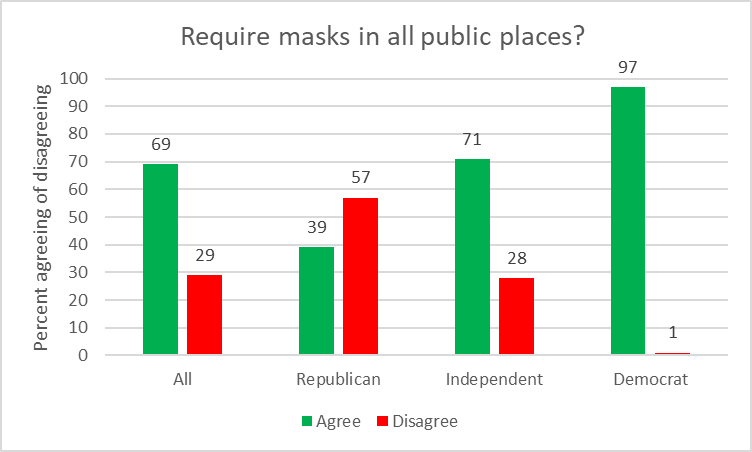 Require masks in all public places?

The latest MU poll, which was just released, shows 72 percent support a mask requirement compared to just 26 percent who don’t and the latter group is mostly Republicans of whom only 47 percent support the requirement. At one level this partisan divide is a puzzling one. Masks effectively inhibit the transmission of the coronavirus from an infected person to others. The evidence is strong that masks work, regardless of the partisan preferences of the wearer .

On October 1, Wisconsin Manufacturers and Commerce, hardly a left-wing organization, issued a statement on best practices during the pandemic. Entitled “WMC calls on business community to educate employees on best practices to slow the spread of COVID-19,” it lists “wearing a mask” as one of three best practices. Quoting the chief medical officer of the Wisconsin Hospital Association, it continued, “Masking works … This is basic science. It’s not a political issue. It should not be a political issue.”

The next day, three regional health systems (Marshfield Clinic, Ascension, and Aspirus) issued a “Joint statement on increased COVID-19 hospitalizations.” Again, they listed “wearing a face covering” as one of the steps needed to turn around the explosion of patients and prevent the overwhelming of their hospitals.

A major figure in turning masks into a partisan issue is, of course, President Trump. Last Sunday’s New York Times has a useful graphic plotting Trump’s shifting position on masks over the course of the pandemic. In April, he was mildly supportive, advocating their use but saying he doesn’t intend to wear one. By July, he turned hostile to masks, mocking Joe Biden for wearing one and hosting the largely mask-less Tulsa rally. For much of August, Trump oscillated back and forth, one day calling masks “patriotic” and then retweeting someone claiming masks don’t work.

In September he became increasing hostile to masks, hosting more mask-less rallies. At the presidential debate, he attacked Biden for wearing a mask and his own family members removed their masks in defiance of the rules of the Cleveland Clinic where the debate was held. The receptions for Judge Amy Coney Barrett, his nominee for Supreme Court were held mask-less, likely leading to the spread of COVID among the attendees. If nothing else, Trump’s experiment proved the need for wide-spreading mask wearing—but it came at a high human cost.

The odd hold Trump has over many of the people who voted for him likely helped contribute to the impression that wearing a mask was a political statement, which may help explain the many Republicans who opposed a mask mandate in the MU polls.

A second factor that likely contributed to politicizing masks is the urban-rural divide in Wisconsin. Initially, the virus hit urban areas particularly hard—New York City nationally and Milwaukee in this state. This led to the impression that the physical layout of rural areas lent them some immunity to the coronavirus, that people were less likely to transmit the virus if they lived far apart. This likely led to the impression among less populous Wisconsin counties that they were being asked to make sacrifices for the sake of the cities.

If this were ever true, it is no longer. The next graph is a scatter plot of the new cases (averaged over a 7-day period), on the vertical axis, versus the population of each county, on the horizontal axis. To fit Milwaukee County on the same chart as Menomonee County I used a logarithmic scale for the horizontal axis, so that each vertical line is ten-times as big as the previous line. To adjust for varying populations, the vertical values are average cases per 100,000 residents.

R2, called the coefficient of determination measures the strength of the relationship between two variables. A value of one indicates that the two variables line up perfectly. A value near zero, on the other hand, suggests there is no relationship. In other words, small Wisconsin counties have neither an advantage or disadvantage when it comes to avoiding COVID-19. 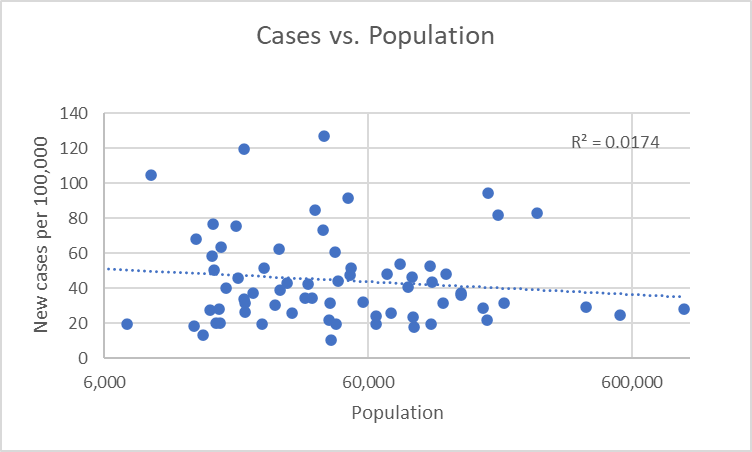 That said, this graph does give a very disturbing message: the average number of new cases of COVID-19 is high in every Wisconsin county and extraordinarily high in many counties. To put this in perspective, New York requires that people traveling from states with average daily case loads over 10 per 100,000 to quarantine for two weeks. Wisconsin does not meet this standard, nor do any of its counties. Similarly, Chicago set a limit of 15 per 100,000, which Wisconsin was able to satisfy in August, but does not today. Suddenly, at the beginning of September Wisconsin’s case load shot up.

The next chart shows the number of new cases per day for Wisconsin and similar Great Lakes states: Michigan, Illinois, Minnesota, and Ohio. Wisconsin is the solid blue line, showing cases here soaring versus the other states. Michigan and Ohio have generally faired the best. Both are known for governors who have been particularly active in fighting the pandemic—one Republican and one Democratic. 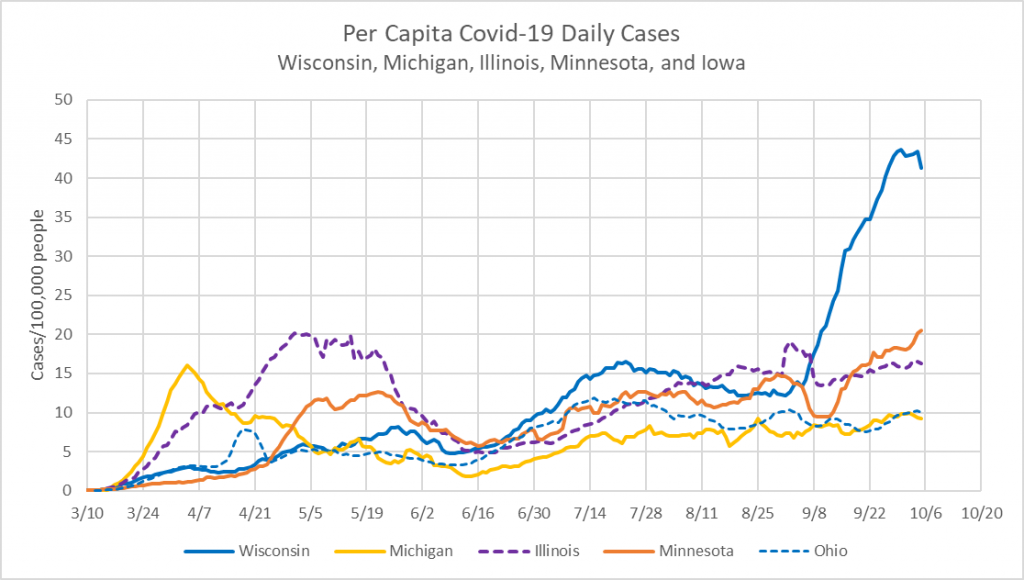 Those arguing against active measures to contain the pandemic will sometimes point to the death rate—namely that recent spikes in new cases have not been followed by similar spikes in deaths. Several things could explain this, including more effective medical care as more has been learned about the disease. Also, there has been a shift to younger victims as those older and with medical conditions that put them at risk do a better job of social distancing.

However, as the next chart shows, the recent surge in cases is translating into increased deaths from COVID-19. An average rate that had been running at 6 or 7 deaths each day has suddenly tripled. 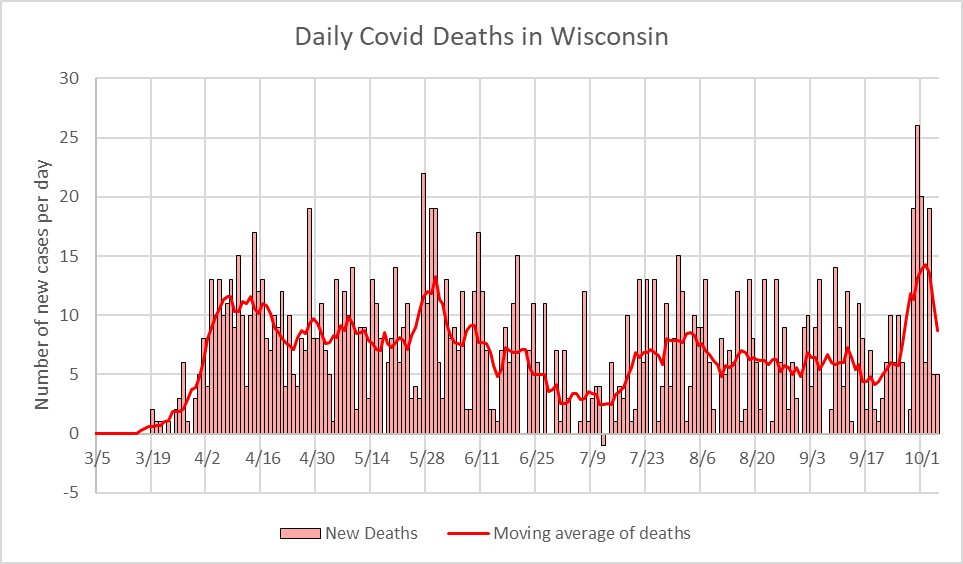 Other indicators are turning flashing red. The percentage of tests that is positive is way higher than it should be. The number of admissions to hospitals are the highest since recording started in April. Recently Wisconsin has attracted national attention for the nation’s third highest per capita rate of new COVID-19 cases, following only North and South Dakota.

Wisconsin’s surge reflects a catastrophic failure in the state’s leadership. Governor Tony Evers is trying to control the virus’ spread. However, the legislative leadership, Assembly Speaker Robin Vos and Senate Majority Leader Scott Fitzgerald, refuse to either allow the governor to develop a solution to mitigate the pandemic or come up with their own solution. They seem totally unconcerned about the sickness and death that will result among the constituents. Instead, according to an article in Tuesday’s Journal Sentinel:

State Senate Majority Leader Scott Fitzgerald of Juneau said Monday that his Republican caucus was waiting to see if the court case against the mask requirement goes their way before coming up with a plan to fight COVID-19.

Likewise, the Wisconsin Institute for Law and Liberty (WILL) seems totally indifferent to the number of additional Wisconsinites who will die if the courts adopt its interpretation of Wisconsin law. Especially if the Legislature continues to refuse requiring masks, it is likely the pandemic will continue to spread in Wisconsin.

WILL accuses Governor Evers of wanting to be a tyrant. The true tyranny is a tyranny of the minority, the 26% found by the Marquette poll to oppose mandating masks against the 72% who wanted such a policy.

One thought on “Data Wonk: The Republican Death Squad”