The secretary of state's visit to the state capitol may have broken law against his office engaging in domestic political activities.

By Melanie Conklin, Wisconsin Examiner - Sep 24th, 2020 12:05 pm
Get a daily rundown of the top stories on Urban Milwaukee 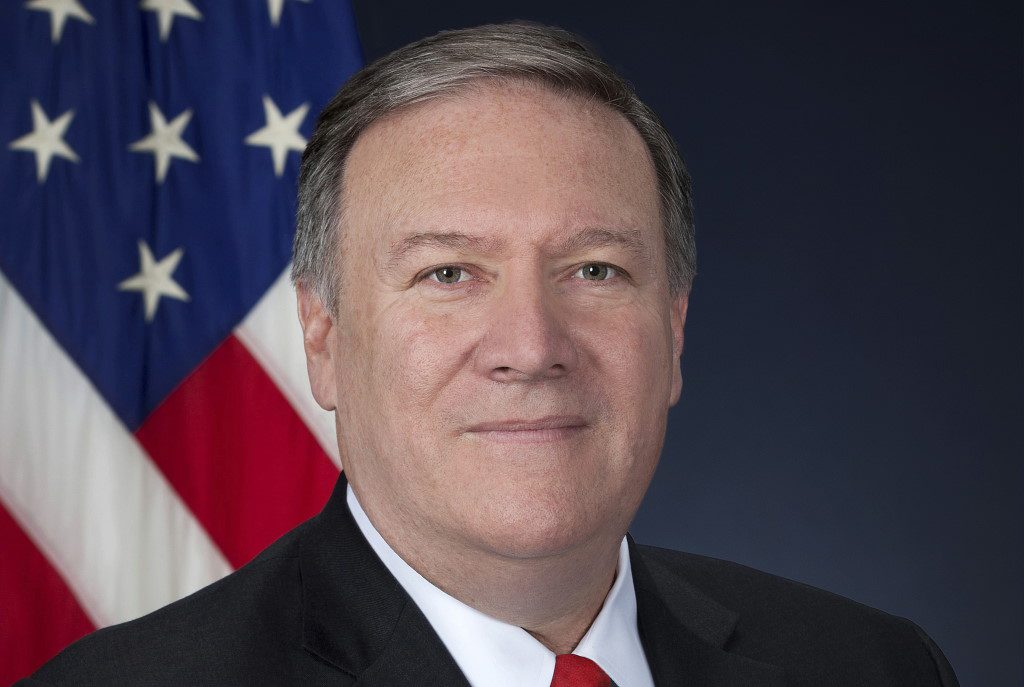 Mike Pompeo. Photo is in the Public Domain.

For anyone questioning why President Donald Trump’s Secretary of State Mike Pompeo was giving a “foreign policy address” at the Wisconsin Capitol while the building is closed to the public and has never before hosted such an event — you are not alone.

A lot of people have been asking him that, Pompeo admitted. Rest assured, the secretary of state knows Wisconsin is not its own nation.

“A lot of people were kidding with me before I came here, indeed some of the political press in Washington were saying, ‘What the heck, secretary, are you going to Wisconsin for?’ I know, it’s not a country. I get it.”

Democratic Senate leader Janet Bewley did not find the use of time or taxpayer money amusing.

She pointed out that senators have refused to come to the Capitol chambers to convene to take further action on the pandemic or to hold the special session on racial disparities and police reform. Other vital issues she wished the legislators had been addressing today include boosting broadband for online work and schooling — or any of the 120 bills that died in the Senate after everyone went home. Many of these, she says, were bipartisan and died because Republican leadership hasn’t been willing to meet since April.

Yet many Republicans from the Senate and Assembly, including leadership, were present Wednesday. Although invited, Democrats, including the governor, were not.

“I think it’s very clear why it’s happening,” says Bewley (D-Mason). “It’s an attempt to distract people from the suffering of people in Wisconsin right now that deserves our attention.” She mentioned healthcare, education challenges, broadband problems, economic distress — and, of course, the bills Democrats put forward and Gov. Tony Evers put forward when he called a special session on racism and police reform.

“And here we have a campaign coming to try to defend its Chinese trade policy at a time that our ginseng farmers really got kicked in the teeth by it,” she adds.

Bewley also questions whether the address, which was followed by a Q&A session, was an ethical violation of the 1939 Hatch Act — a federal law that prohibits government employees in the executive branch (other than the president and vice-president) from engaging in certain political activities. A House committee is already looking into Pompeo giving a speech at the Republican National Convention on similar grounds.

“It does have the fragrance of a violation of the Hatch Act,” asserts Bewley, adding that the cost for opening and staffing the chambers and security associated with the visit while the Capitol remains closed to the public requires “enormous resources” when the state is in a financial crunch due to the pandemic. “That’s taxpayer dollars,” she notes.

Chinese Communists at the PTA

Pompeo justified his stateside speech based on the Chinese Communist Party infiltrating local and state governments — and even PTA meetings. It was a speech clearly espousing and justifying the Trump administration’s approach to China, which is a regular part of Trump’s stump speech, including at stops in this critical swing state.

Pompeo began his speech, however, by diplomatically complimenting the beauty of the Senate Chambers and calling it the “second prettiest thing you have to Lambeau Field in Wisconsin.”

But then he got right to the point, explaining why he thought his statehouse speech was justified.

“What goes on here and the work that you all do is so important to the mission that I have, and my team has at the State Department,” Pompeo said. “I feel it’s my responsibility to get up and talk to you about what we’re doing on behalf of the people of Wisconsin, the people of America.”

His further explanation — as well as the justification from Sen. Roger Roth (R-Appleton) went back to an email Wisconsin Examiner talked to him about in April after the Chinese government asked the Wisconsin Senate for a commendation (Chinese Consulate resolution: supporting China’s battle against COVID-19) — and his first reply was one word back to them, quoted effusively on Wednesday by Pompeo: “Nuts.”

“Roger didn’t take the bait,” Pompeo said. “What happened here in Wisconsin is happening all across the world, all across the United States.” He has been looking into how the Chinese Communist Party (CCP) is trying to influence statehouses and “the party and its proxies aims to make Americans receptive to Beijing’s form [of] authoritarianism.”

Pompeo said China is using lower-level governmental entities to circumvent the federal government. He said CCP General Secretary Xi Jinping “knows the federal government is pushing back against the Chinese Communist Party here in the United States and its malign influence… and Xi thinks that local leaders may well be the weak link.” He says Chinese Communists have even infiltrated PTA meetings, police departments and even sister city programs “like the ones in Door County, La Crosse, Milwaukee and Richland Center.”

How Russia in particular has been found to be meddling in life and democracy in the United States — in particular in U.S. elections — did not come up.

Pompeo also suggested scrutinizing the state pension fund, stating that Wisconsin has investments in China Mobile and China Telecom. “Both are state-owned giants. And they are an integral part of Chinese Orwellian surveillance system. Do you want your teachers, your firefighters, your policemen invested in those kinds of activities?”

Trump has blanketed the state with visits and surrogates as Wisconsin remains a key battleground state the president must win in his quest for reelection. On Tuesday U.S. Attorney General William Barr was in Milwaukee and Vice President Mike Pence will be in Eau Claire on Thursday. Trump held a rally in Mosinee late last week where he spoke extensively about China.

The secretary of state even hit on the ‘law and order’ theme Trump has focused on frequently since the convention by decrying Democrats as backing rioters, flag burners, mayhem and violence. Pompeo, however, avoided that language.

“The CCP thinks it can drown out American cries for accountability with shouts of racism. We won’t let that happen. We can’t,” stressed Pompeo to the legislators. “The CCP wants to foment the kind of strife we’ve seen in Minneapolis, Portland, Kenosha. That’s disgusting. We can’t let it  happen.”

And he did praise Trump, or at least the administration. “There’s a reason that we remain the greatest nation in the history of civilization. Beijing’s best laid plans are no match for American determination,” Pompeo said. “You have a friend in the Trump Administration to push back.”

Congressman Mike Gallagher (R-Wis.) also received a request from a Chinese consul official asking for a commendation, like the one Roth received. He applauded Pompeo’s visit, saying, “Secretary Pompeo’s speech makes clear that the Chinese Communist Party’s malign influence campaign isn’t a one-off — it’s a concentrated effort that extends from Hollywood to the NBA to the Wisconsin State Capitol. I’m glad he traveled to Madison to raise the public’s awareness of this important issue, and hope that any official targeted by the Chinese Communist Party’s influence peddling follows the Roth playbook in pushing back.”

State Sen. Chris Larson (D-Milwaukee) did his own pushing back — on his Republican colleagues for using the state Capitol and state resources in such a way at the height of campaign season.

“At the State Capitol today, Secretary of State Mike Pompeo delivered a campaign speech disguised as a foreign policy address. Echoing campaign messaging that the President has been “tough on China,” Pompeo used our senate chamber as a prop to attack the Chinese government, blaming them for America’s failure to contain COVID-19. Despite Republicans’ refusal to meet and pass any legislation since April 15th, I want to be perfectly clear: our senate chamber is not a prop,” said Larson in a release.

Larson continued: “Now is not the time for photo lines with Trump administration officials, political speeches using public dollars or scapegoating China for Republicans’ own failures. The time is now to reconvene the Legislature and do the people’s business. As Secretary Pompeo remarked in his speech, our senate chamber is beautiful, and deserves far more than to be used as a political prop.”

One thought on “Did Pompeo Violate Federal Law With Visit?”