26 suspects charged in alleged network running from city's South Side to California. 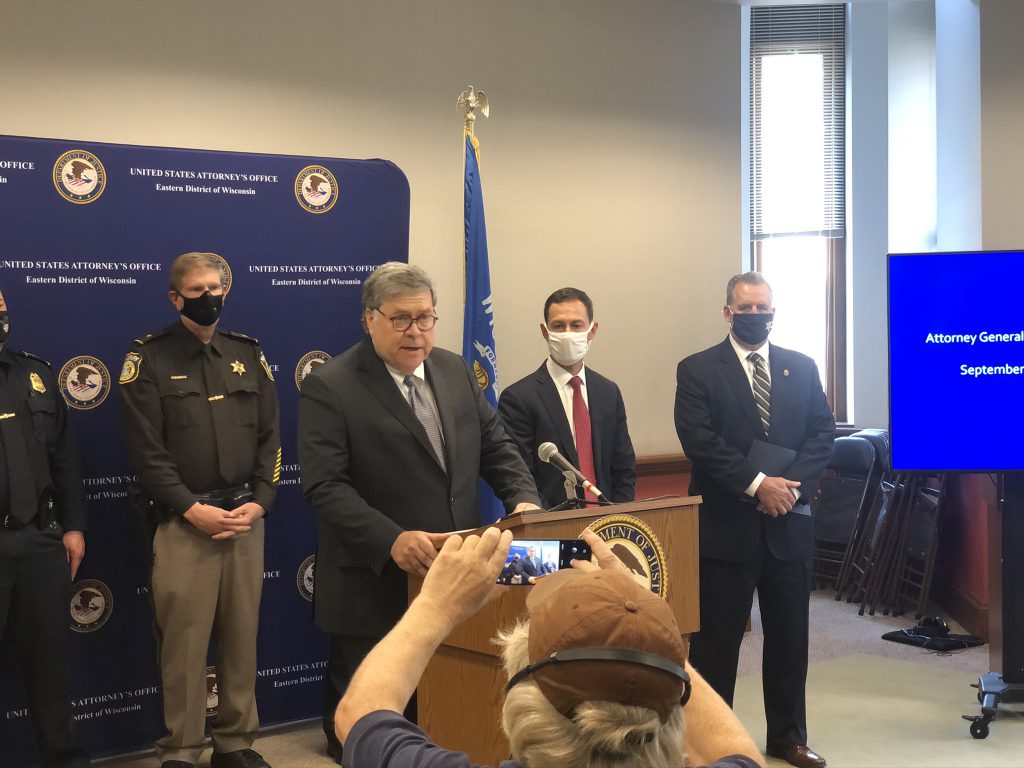 The arrests were made by officers from 16 law enforcement agencies as part of Operation Legend, the federal resource surge announced in July. The effort is a rebranding of one announced in December that will provide Milwaukee with $12 million that will support the hiring of 30 officers.

“We have already seen some excellent results from around the country,” said Barr, speaking at a press conference at the Federal Courthouse.

He said since the program was announced the city has seen a 27 percent reduction in non-fatal shootings. “We haven’t seen the corresponding drop in homicides,” said Barr, acknowledging the city’s rate has doubled in 2020.

“These resources are much needed and with it comes energy and a boost in morale,” said Matthew D. Krueger, U.S. Attorney for the Eastern District of Wisconsin

The attorney announced that the task force had unsealed a criminal complaint that charges 26 individuals with operating a California to Milwaukee drug distribution network. Included were seizures of cocaine, marijuana and heroin.

Those arrested include the alleged leader Louis R. Perez, III who Krueger said goes by the nickname “Eight Ball” and leads an organization known as Mexican Posse. The criminal complaint says Perez lives in West Allis and recently purchased property on S. 26th St. in Milwaukee.

The arrests also netted 33 firearms, approximately $170,000 in cash and 700 grams of heroin at one location. Krueger shared images of long rifles seized.

The investigation, according to the criminal complaint, dates back to September 2018. It details a distribution network, centered around marijuana, that permeated much of the city’s South Side.

The drugs were allegedly mailed through FedEx and UPS, and then cash from the sale of drugs was mailed back via USPS, triggering a charge of money laundering.

An informant, charged with supplying cocaine to Perez III, said Perez III brought 800 to 1,000 pounds of marijuana to Milwaukee from California each month. The informant said the heroin supply came from Milwaukee and that Perez found it “dangerous” to distribute.

The conspiracy charges that each defendant faces have a mandatory minimum of 10 years. Some defendants, including Perez III, face multiple charges and longer sentences.

A copy of the criminal complaint can be found on Urban Milwaukee.

Barr on Defunding the Police

Fielding questions after the announcement, Barr declined to comment on the specifics of Mayor Tom Barrett‘s proposed cut of 120 officers from the police department.

The Attorney General said cities across the country shouldn’t cut policing and compared a movement to “defund the police” to mass disarmanent. “You get what you pay for,” he said about the Operation Legend surge.

Barr said law enforcement is making an impact with arrests. “The other ingredient that goes into that is the rest of the criminal justice system,” he said. “The court system has largely failed and is rapidly returning people to the streets at some places in the federal system, at some places in the state system. One of the drivers of crime I think right now has been the release of criminals with violent records as well as the disposition of judges not to keep people on pre-trial detention.”

A lone protester, Jerry Papa, was outside the courthouse. “Where is everybody?” said Papa when Urban Milwaukee greeted Papa. The retired bus driver held a sign that said “Barr, America’s Nazi AG.”