What Happened At Comet Cafe?

Former employees say it was closed because of union organizing effort. Owners say it was simply financial. 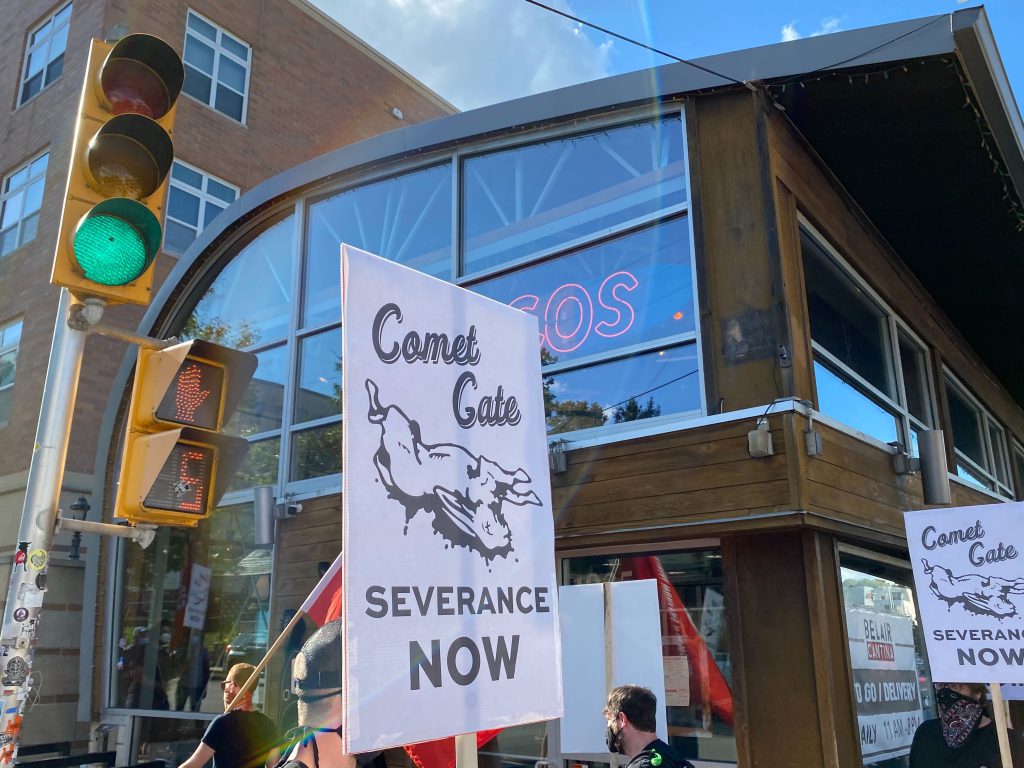 When Comet Cafe, 1943 N. Farwell Ave., closed its doors in early July, behind the scenes disagreements between staff and owners spilled into public view. Now some of its former workers, feeling aggrieved, are organizing pickets and demanding severance from their former employer.

William Dugan, who worked at Comet before it closed and is now acting as the spokesperson for the organized former employees, told Urban Milwaukee they believe the reason Comet Cafe shut down and the staff was terminated  was because of their attempt to organize the employees into a union.

One of the owners, Leslie Montemurro, said they closed the restaurant because it was losing money and has been for months.

The owners closed Fuel Cafe on Center Street just days after they closed Comet. And they’ve never reopened the other Fuel location on S. 5th Street. since closing due to the pandemic in mid-March.

The disagreements between the owners and the employees have escalated since first being announced in early July. Both the former workers and the owners shared a similar timeline of events with Urban Milwaukee. Their only disagreement being the reason the restaurant ultimately closed.

On July 4, owners were notified that issues with the hood vent and air conditioning were producing choking fumes and extreme temperatures in the kitchen. Dugan, who worked in the kitchen, said temperatures exceeded 100 degrees. Eitel told the cafe’s managers to close at 4 p.m. that day.

Dugan said the workers were telling managers they wouldn’t come into work that day because of the heat. Montemurro said when management notified Eitel on July 4 of the issues with the kitchen the restaurant was closed so repairs could be made.

On July 6th, a list of demands signed by approximately 20 current and former employees of Comet Cafe was delivered to the owners. It included demands that repairs be made to the restaurant and equipment, and that better protocols for service during the COVID-19 pandemic be established. “We didn’t feel like we were safe coming back,” said Dugan of Comet’s reopening in after the pandemic took hold.

On July 7th, the owners sat down with a handful of the staff, including Dugan. At this time, the hood and AC issues had already been repaired or were in the process of being repaired. The meeting was at Comet Cafe, and while the two parties discussed the staff’s complaints, workers could be heard in the kitchen fixing things.

After the meeting, Dugan wrote on Facebook, “Ownership agreed to literally everything we wanted. We will see in the coming weeks, but they seemed to engage with us in good faith. Organizing with your fellow employees works. #cometgate.”

Then on July 10th, the owners announced to the staff that Comet Cafe would be closing indefinitely. They did this over a scheduling app called 7shifts. Montemurro said the same system was how workers were notified in March that they were shutting down due to the pandemic.

However, the workers took this as an abrupt and, as Dugan put it, “unceremonial” firing. Which they read as an attempt to halt the burgeoning organization of the employees at the restaurant.

Montemurro is adamant that they did not see what the employees were doing as organizing a union. She said at no time during their meeting did they indicate they were forming a labor organization. And even if they had, she said, the outcome would have been the same. The cafe had been losing money for months, some days their sales didn’t even cover the cost of labor.

She said if she could do anything over, she would have held a staff meeting to announce the closure. Instead, she said the owners wanted employees to be able to apply for unemployment as soon as possible.

However, Dugan said the workers thought it was obvious they were organizing, based upon the letter with more than 20 signatures. He said owners called employees after the firing to ask them if there was anything they could do to help now that the cafe was closed. He said he thought that was “weird” and added “not firing us would have been the correct decision in that matter.”

“Had we not done this, Comet Cafe would 100 percent still be open,” Dugan said. “It gave them a really convenient excuse to close for COVID.”

“We wouldn’t close a restaurant to avoid making repairs,” Montemurro said of the over two-decade-old restaurant. Instead, she said, Comet was just another of the many small businesses across the country that have closed their doors during the pandemic.

The former employees meanwhile feel that Comet Cafe is operated by a large enough restaurant group that they could eat any losses. And they point to the owners’ planned HIYA Taco in Shorewood as proof they have money to spare. Because of this, they feel Comet didn’t need to close, and rather, it was retaliation against the employees.

Montemurro said the group makes decisions based on each individual business and that each business has its own unique debt and operating costs. And said HIYA Taco’s business model is based on counter service and takeout, which will work better during the pandemic.

Dugan said the workers plan to continue raising awareness of their plight, some of whom never received unemployment from the last time the cafe closed. And, ultimately, he said they would like to organize all the restaurants under the Mojofuco — Toro, Toro, Toro ownership umbrella into a company-wide union.

According to a liquor license, Johnson and Montemurro were equal partners in Comet.