Voter Registration Down During Pandemic

By Laurel White, Wisconsin Public Radio - Jul 30th, 2020 11:36 am
Get a daily rundown of the top stories on Urban Milwaukee 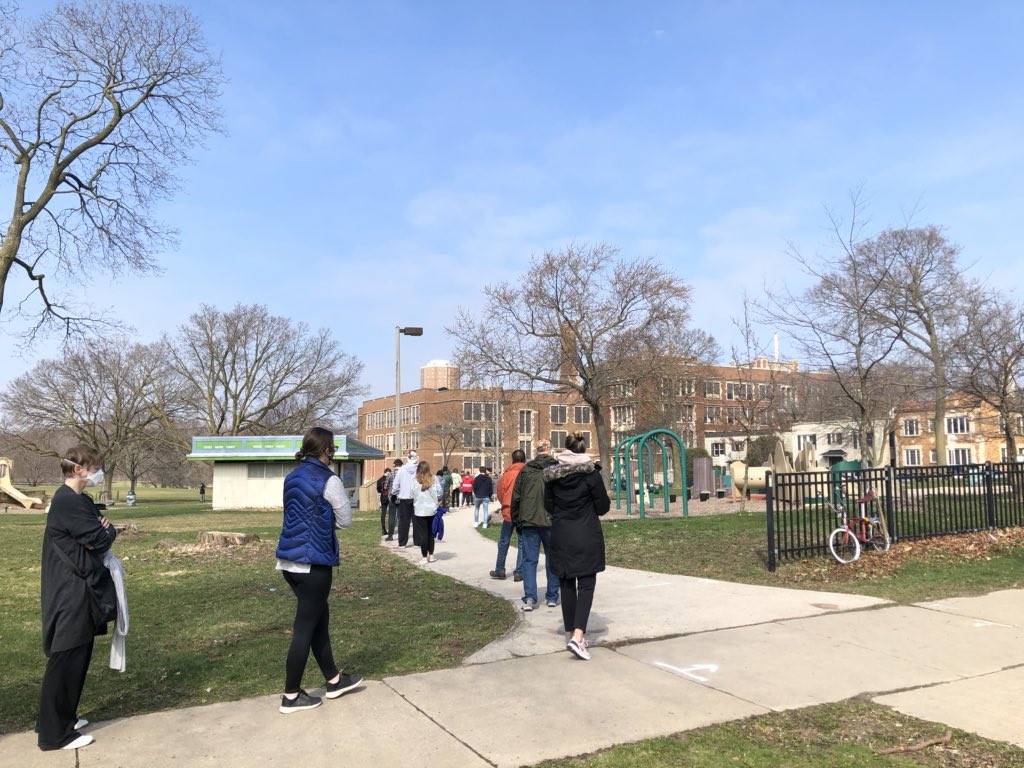 Jeramey Jannene spoke with multiple voters at Riverside High School, one of five polling places in the City of Milwaukee, that waited over 2.5 hours to vote. Photo by Jeramey Jannene.

New voter registrations in Wisconsin have dipped in 2020 compared to several previous presidential election cycles — a less-than-ideal result for organizations attempting to mobilize new voters in a state many believe could be the final tipping point in the presidential election.

According to data from the Wisconsin Elections Commission, roughly 100,000 people registered to vote in Wisconsin between Jan. 1 and July 1. That’s a 20 percent decline from 2016, when about 125,000 people joined the state’s voter rolls in the same time period.

This year’s number also trails a similar time period in 2012, which saw about 175,000 new Wisconsin voters between January and August. About 118,000 joined voter rolls between January and August in 2008, although officials warn the 2008 number could be artificially low. There were updates to the rolls that year, after the state implemented its statewide voter registration list. That marked the beginning of a new way to track and remove deceased people, duplicate listings and individuals who had moved out of state from the list.

In a state where the last presidential election was decided by fewer than 23,000 votes, organizers on both sides of the aisle have pushed the mantra of “every vote counts.”

Meanwhile, leaders of groups aiming to get more first-time voters to the polls in November are calling the dip in new registrations “tragic,” but motivating.

Jennifer O’Hear, executive director of Common Ground, a community organization in Milwaukee that set a goal of registering or re-registering 2,500 voters in the city before November, said her group has had to drastically change its outreach efforts during the COVID-19 pandemic.

The group canceled a large organizing rally this spring, shortly after the pandemic began; temporarily halted its plans to knock on 21,000 doors in the community; and has shifted to relying on members’ outreach to their personal networks, rather than to strangers.

“We know that it’s possible the next president of the United States could be decided by Wisconsin, could be decided by the turnout levels in Milwaukee,” said O’Hear. “We have a city and a state that’s really playing an outsized role in what the next four years are going to be like. So our interest here is making sure as many people as possible participate in that process and make that decision.”

Voter turnout in the Democratic stronghold of Milwaukee dipped in 2016, something many believe directly contributed to President Donald Trump’s narrow victory in Wisconsin.

Brenda McMurphy, an organizer for Common Ground, said she has been talking with her neighbors and co-workers about voting and giving them information to pass on to their own social networks.

“I was trying to get every avenue possible, any avenue that I could possibly think of where we could get people registered to vote,” she said.

The Voter Participation Center, a national group that works to register first-time voters, has directly targeted hundreds of thousands of unregistered but eligible Wisconsin voters already this year.

According to the Elections Commission, there are about a million unregistered but eligible voters in Wisconsin.

Page Gardner, founder and president of the Voter Participation Center, said Wisconsin’s dip in registrations — which mirrors a nationwide trend — is disturbing.

“The plummeting of voter registration in the 2020 election cycle is nothing else than tragic,” Gardner said. “This is a body blow, literally a body blow to democracy.”

Gardner said her group has shifted more time and money to sending mailings to Wisconsin residents, telling them how to register to vote or request a mail-in ballot. As of July, she said her group had sent more than 600,000 pieces of mail in Wisconsin. It’s planning another mailing in September.

The efforts come as conversations and conflict swirl about how November’s election should be administered as cases of the new coronavirus continue to multiply in Wisconsin and across the country.

Some have pushed mail-in voting, while the president has cast doubt on the integrity of mail-in ballots.

A Democratic lawsuit is looking to lift a number of Wisconsin’s election laws ahead of November, saying they make it too difficult to vote during the pandemic.

O’Hear, the head of Common Ground in Milwaukee, bemoaned Wisconsin’s voter registration laws. The state bars people from registering to vote online or by mail in the 20 days before an election. During that time period — which started last week for the upcoming Aug. 11 election — they have to register to vote in person.

“Honestly, the system we have here in Wisconsin makes it unnecessarily difficult for people,” O’Hear said. “We’re (now) in this 20-day blackout period. Particularly during an epidemic, but even without the epidemic, it’s blatant voter suppression.”