Brandon Reyes offers a philosophy of bartending flavored by his Puerto Rican heritage. 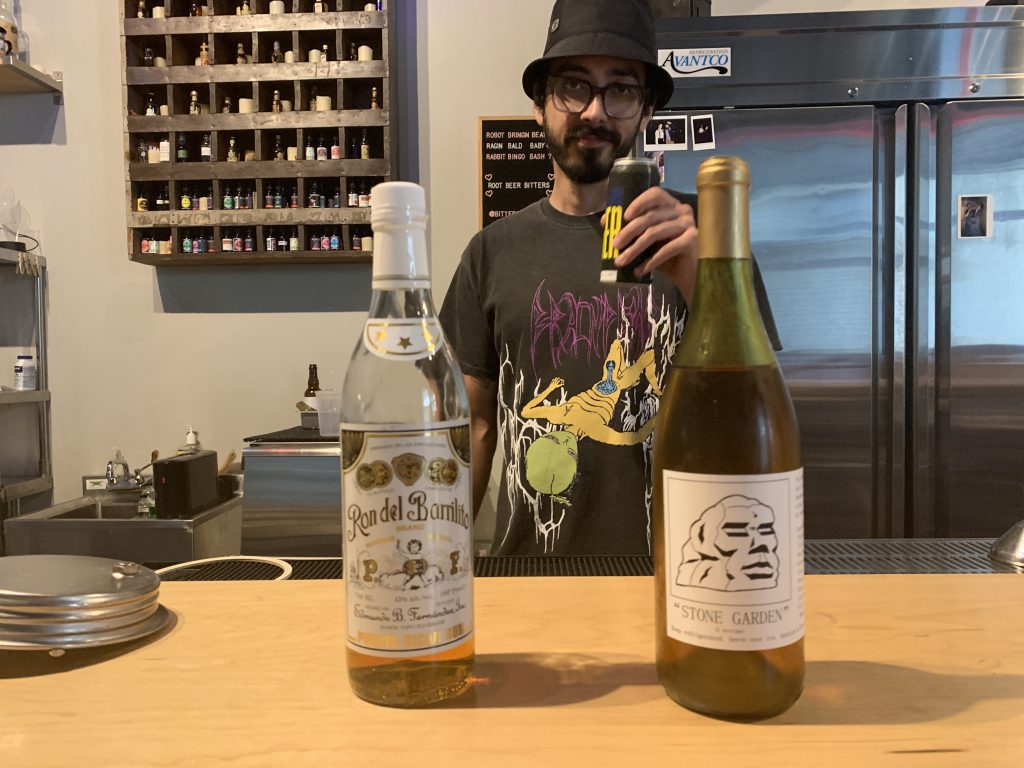 Bittercube is the chocolate factory. The cocktails are the snozzberries and the chocolate river, and Brandon Reyes is Willy Wonka. He is a second generation Boricua, born in Riverwest and raised amongst its rich culture, with plentiful meals and an array of delectable sweets. He never lost his island dialect when speaking Spanish, nor his sensibility with flavors, creating imaginative cocktails and N/A drinks. He once fashioned a drink out of Chicha Morada, a Peruvian purple corn. This is an example of how his Latino roots have carried on throughout his career, and it shows in the ingredients he chooses for the mind-bending flavor combinations he concocts. There is a history, a representation of the culture in everything he creates.

Most recently, he created six new batch cocktails for Bittercube’s pick up menu. There is WEPA!, Stone Garden, Blue Moon, Cap N’ Corn, Just gimme an Old Fashioned, and the (almost) classic Negroni. WEPA! is inspired by his heritage, with flavors inspired by a Puerto Rican candy he grew up on. There is a Coqui (chirping frog) on the label, and it is made with a sesame seed candy, Ron De Barrilito and orange peel. Ron de Barrilito is the premier rum of the island, a favorite among the people of Puerto Rico, making it an experiment in authenticity. WEPA! is a versatile Spanish word used to express joy and excitement. 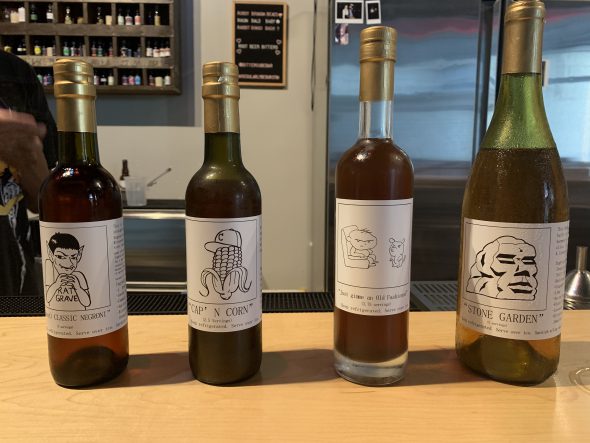 Reyes started his bartending career at the short lived Blue Jacket in Walker’s Point, and in 2015 became head bartender at Dock 18, Bittercube’s tasting room in the Lincoln Warehouse. Bartender is a term used very loosely, as he created drink menus and their visual art with a street artist’s approach. There is tagger lettering, neo-realism and flights of imaginative whimsy both in the art and the drink recipes. Some recipes are traditional and not meant to be trifled with, however.

“The Pina Colada is the perfect drink”, he tells me, rubbing the scruff on his face and looking off into the distance. “Pineapple juice, Rum and Coco Lopez is the way it should be. There are all kinds of different ways people want to change it. They want to substitute the Coco Lopez for some other kind of coconut cream, robbing it of its history and thus corrupting its Carribean spirit”, he says matter-of-factly. I don’t argue, because this is a man who has studied his craft and is teaching me something as we chat. “Coco Lopez is a cream of coconut that has the right amount of sweetness and that velvety smooth texture that a Pina Colada should have. People don’t want to order it because it may seem too sweet, and that is a problem in cocktail culture. Sugar is demonized.”

The world of cocktails attracts a very specific group of people, most commonly the ones associated with the gentrification of neighborhoods and the ones that are painfully out of touch. Brandon doesn’t believe this is the way it should be, as cocktails are very much embedded in the roots of people and their culture. Sugar is something people will shy away from and always ask for something in lieu of it. “Sugar was farmed on the island and came from slave labor and is now something that is associated with people of color and is dismissed,” he teaches me. That is not the only inherently racist notion in the cocktail world.

“Tiki is an idea in bar culture that needs to be reconsidered. Tiki means ‘Sun God’ and as an aesthetic in bars was created by Navy soldiers on leave in America”, he says. Tiki bars boast ancient holy statues and faces, as a means of entertainment. “You want to have a tropical theme? Fine – have blowfish and palm trees and fish tanks and nautical themes. The Fu Manchu mugs and tiki visages have to come down, though.” The Polynesian community has been vocal about the blatant disrespect for their customs, and Brandon and his crew support its removal as well.

Cocktail bars in a neighborhood can usually mean that gentrification is about to take hold, but Reyes says it doesn’t have to be that way. “There is a lot of history and education in cocktails, and it is obscure and rarely talked about due to its association with the bougie crowd. It is because of them that it is generally written off.” He teaches classes on this matter and delves into this on a regular basis, as well as teaching people how to make a proper drink. “As people of color, we have a lot to offer the American subconscious. Cocktails are no exception.”