Is It Safe to Reopen the State?

In recent days, the question of when to remove the controls aimed at reducing transmission of the coronavirus has become a partisan split. A variety of Republican politicians and interest groups have been loudly demanding that these controls be removed. Oddly this comes even as polls shows most Americans—including a majority of Republicans—puts greater priority on fighting the coronavirus than quickly restoring the economy.

The chart below tracks the number of COVID-19 cases over the past two months in Milwaukee (shown in green), in Brown County (in orange), and in the remainder of Wisconsin. In order to reduce the amount of noise in the data, seven-day moving averages are shown. Early on, about half the cases were in Milwaukee County. More recently, Milwaukee’s share has declined, as cases rose in other parts of the state, particularly in the Green Bay meat-packing industry. 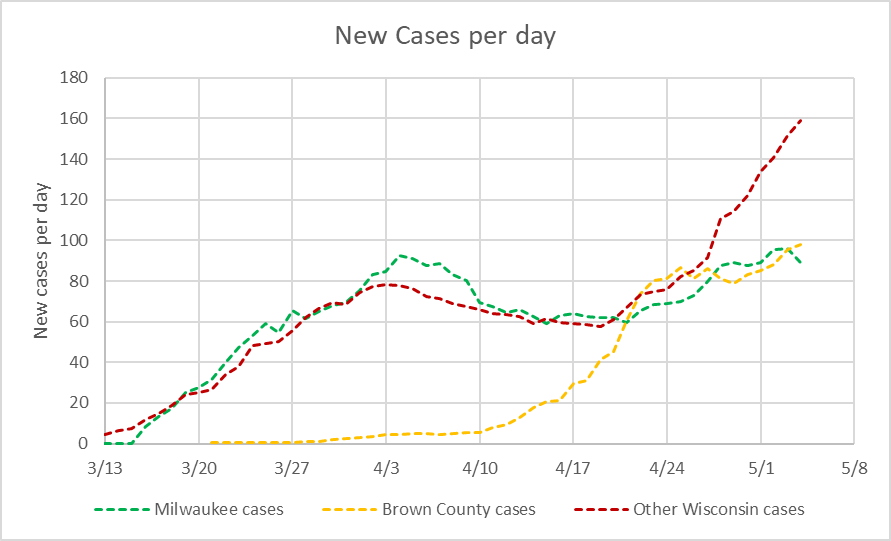 The next chart tracks the number of reported deaths from the coronavirus in the same three areas: Milwaukee, Brown County and the rest of Wisconsin. The number of Milwaukee deaths has been declining but is still running at about half the total state total.

Despite the spike in cases in Brown County, the average number of deaths per day is still slightly below one. Partly this reflects the time gap between being identified with COVID-19 and dying. It may also stem from population differences if the factory workers are younger and healthier than many of the Milwaukee victims of the disease. 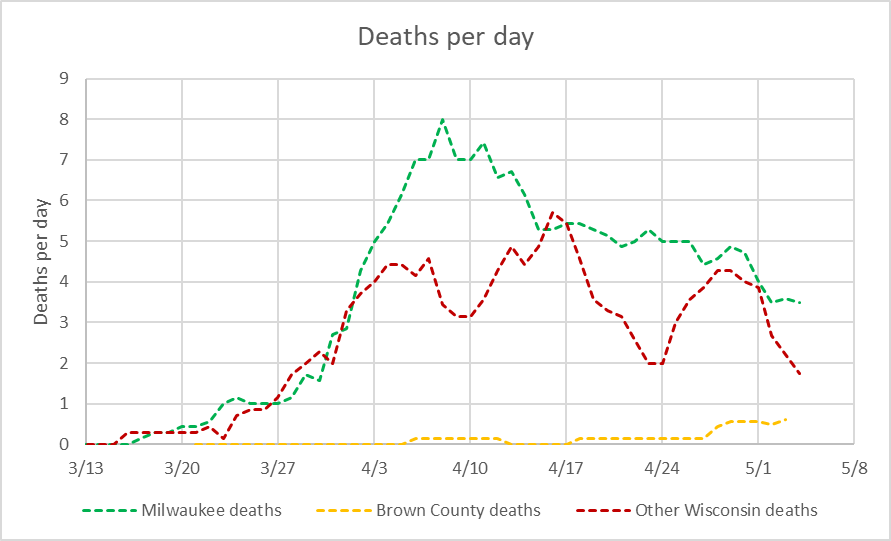 Another way to divide Wisconsin is by political orientation. The next chart tracks the number of new cases in the 12 counties that Democrat Hillary Clinton won in 2016 (Ashland, Bayfield, Dane, Douglas, Eau Claire, Green, Iowa, La Crosse, Menominee, Milwaukee, Portage, and Rock, shown in blue) with the 60 counties won by Donald Trump (shown in red). At first, COVID-19 hit blue areas—especially Milwaukee—particularly hard. More recently the virus seems to be gaining ground in red areas. This pattern is consistent with the comments from Brookings Institution researchers who report that rural areas and small towns are increasingly the victims of the virus. 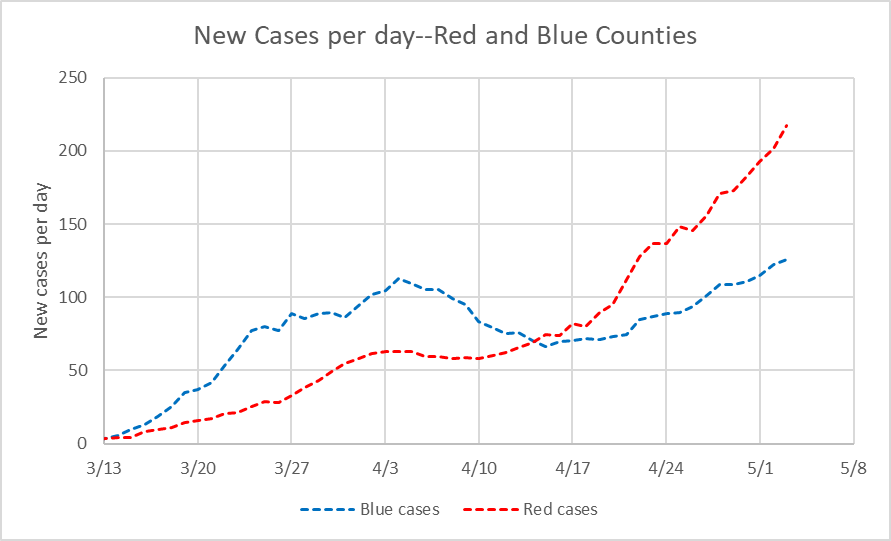 Finally, the next chart tracks deaths in red and blue counties, again based on their vote in the 2016 presidential election. In blue counties the number of deaths and cases peaked in early April. Red counties, by contrast, did not see a similar peak. 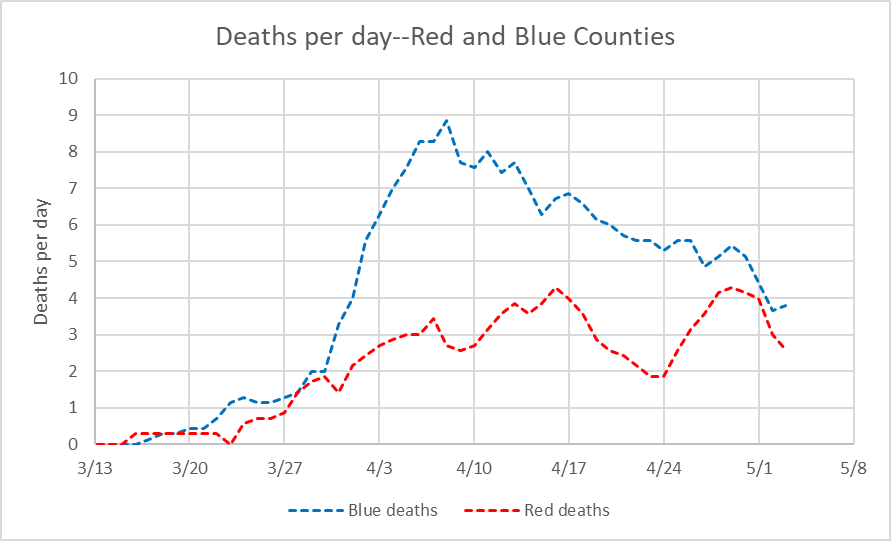 Deaths per day–Red and Blue counties

There are a number of caveats that must be made before coming to firm conclusions from this evidence. First, both cases and deaths are probably substantially undercounted. Until there are sufficient testing supplies so that random samples of the population can be undertaken, infected people who don’t manifest symptoms will be missed.

The Legislature’s current lawsuit against Health Secretary-Designee Andrea Palm can be described as a contest between two sections of the Wisconsin statutes. The Legislature prefers section 227.24, entitled “Emergency rules; exemptions.” This section applies to any agency applying emergency rules, including applying time limits before the agency must get legislative approval.

Unfortunately for the Legislature’s argument, a second section of the statutes, Chapter 252. Communicable Diseases is far more focused on the present situation. It states, in part that the state health department

… may promulgate and enforce rules or issue orders for guarding against the introduction of any communicable disease into the state, for the control and suppression of communicable diseases. Any rule or order may be made applicable to the whole or any specified part of the state, … The department may issue orders for any city, village or county by service upon the local health officer. Rules that are promulgated and orders that are issued under this subsection supersede conflicting or less stringent local regulations, orders or ordinances.

Chapter 252 notes later that the “department may authorize and implement all emergency measures necessary to control communicable diseases.”

Nowhere does Chapter 252 put a time limit on such rules or orders or require that the health department get the approval of the Legislature. Nor does Chapter 252 cross-reference Section 227.24.

A normal court would rule that when two sections of the statutes contradict one another, the more specific one—Chapter 252 in this case–rules. The trouble is the Wisconsin Supreme Court is not a normal court, for two reasons.

First its conservative members have been deeply partisan and antagonistic to Gov. Tony Evers and his administration even before he took office. The conservatives’ eagerness to bypass lower courts with this case and those challenging the lame duck law is a bad sign for Evers and Palm.

Second is ideology. Justices Dan Kelly and Rebecca Bradley are both right-wing ideologues, who buy into the assertion that delegations of legislative power to the executive branch is a threat to liberty. An amicus brief prepared by the Wisconsin Institute for Law and Liberty appeals to justices buying into this theory by suggesting that Chapter 252 is unconstitutional.

The data suggest that such a decision, by turning over the fight against the coronavirus to the tender mercies of the state Legislature, could be a disaster for Wisconsin. Rather than restore the Wisconsin economy, it could make a revival of the state’s economy far more difficult.

Categories: Data Wonk, Health, Politics, What You Need To Know

5 thoughts on “Data Wonk: Is It Safe to Reopen the State?”