What a singer and songwriter. No one else did what he did or even tried. 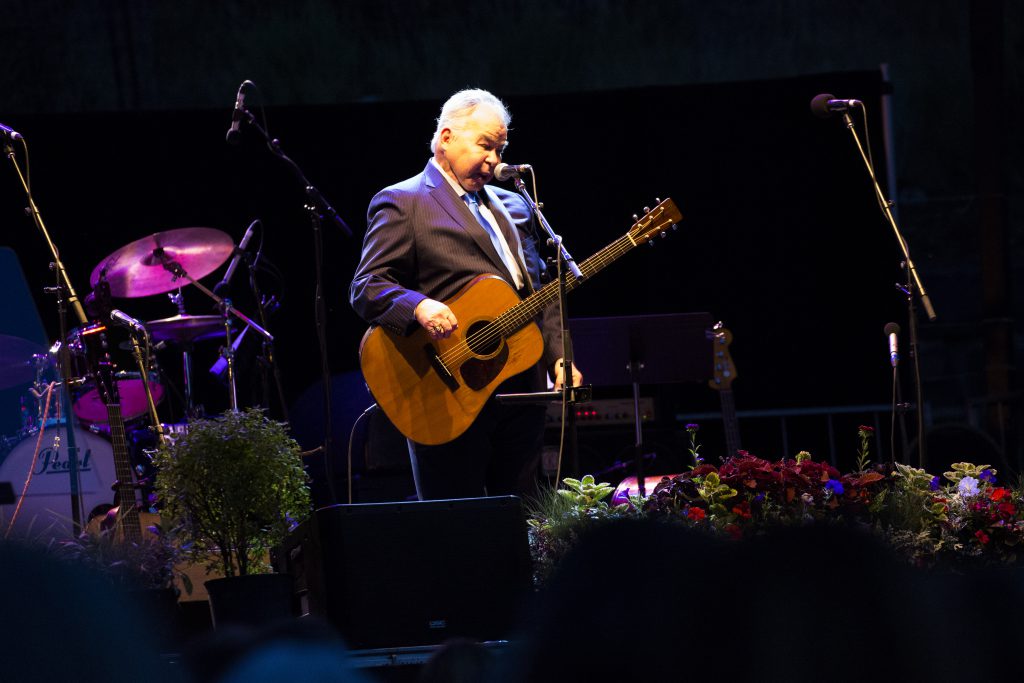 Cancer came for John Prine twice. The first time all it did was cock his head at a more roguish angle and give his voice the natural deep scratch his songs deserved. The second time he fought through to produce another masterpiece, The Tree Of Forgiveness. That collection is as good as anything he’s done and that’s saying something. What finally caught him was the coronavirus — infinitesimally small, but it might as well be a meteor the way it’s rearranging the world.

Amid the daily reports of suffering and predictions of more of the same, the individual losses — whether they are caused by the virus or, like Bill Withers, a worn out ticker — kick you when you’re already down. Sadly, there will be more.

Memorials are out of the question at the moment, so everyone gathers on Facebook or cues up a video on Youtube to comfort themselves. John Prine was especially beloved, like a member of the family, everyone’s favorite brother, cousin or uncle. There was always a barrier between him and commercial radio, so a lot of people have yet to experience what he could do with a couple chords and an uncanny ability to approach things from a new angle. But he filled The Riverside, The Pabst, and theaters everywhere and was some kind of national treasure. All reports indicate he died a happy man.

John Prine was a singularity, no one else did what he did, or even tried — you had to go straight to the source to get the good stuff. Others sang his songs, most famously Bonnie Raitt doing “Angel From Montgomery,” and their versions were beautiful. But some secret Prine ingredient was not present, the little wink written into his tunes was still best coming from the one who wrote them.

There is a lot of praise for his early work, and that’s as it should be. His debut produced at least three timeless classics. And he kept writing more and more great ones. With beauties like “The Speed Of The Sound Of Loneliness,” You would think there was no way he could get better — somehow, he did.

He hit a rich new vein, one he would mine the rest of his life, around the time he recorded Jesus The Missing Years and it’s follow up, Lost Dogs & Mixed Blessings. Both were produced brilliantly by Milwaukee native and Tom Petty sideman, Howie Epstein. These records announced the arrival of Prine’s master’s phase. They showed he now had complete command, earned through years of hard work and knowing exactly who you are and what you should be doing. Songs like “Lake Marie,” which I wrote about before, were a thing unto themselves. Like Randy Newman, Lyle Lovett (at least once) and nobody else I can think of, he wove strands of imagery, storytelling, and a little bit of stand-up into something much bigger than the sum of its parts. In “Lake Marie” he wrings drama from a long tale of love come and gone. It ends with a bang at the scene of a gruesome murder broadcast in black and white on the evening news. He sneaks in a funny aside about going to Canada to save his marriage and maybe “catch a few fish.” It’s pure Prine.

He kept on in this manner, his work touched by whimsy and sorrow, often in the same song, for the second part of his career. When he wasn’t doing his own gems, he sang great country covers with an A-list of Nashville songbirds. Two years ago he got back to writing (co-writing too, with one song credited to him and Phil Spector). Then came just about the best parting gift a person could ask for, The Tree Of Forgiveness.  I was worried he might have contracted a case of singer/songwriter seriousness; the title sounded like a lunge for profundity. I should have known better: The Tree Of Forgiveness was the name of an afterlife nightclub he planned to open in “When I Get To Heaven.” He described a hoppin’ little scene he expected to find himself in, holding a vodka and ginger ale and smoking a cigarette nine miles long. (The man knew how to exaggerate.) Every song on the record, from straightforward to absurd, could only have come from his imagination.

Try this on for size: “Lonesome Friends Of Science.” It’s a charming non-sequitur, a funny, head-scratching, timeless lament for the square pegs everywhere, gladly checked out of the world at large and quarantined, with things to occupy them we couldn’t possibly understand. Again, it’s pure Prine — reassuring and goofy. His surreal streak continues in “Egg & Daughter Nite, Lincoln Nebraska, 1967 (Crazy Bone).” The title says it all, I think. The song is loopy enough to make you forget what’s going on in the real world.

A careerist would have done more to reach a larger audience. In the modern era, artists are brands and don’t mind being associated with other, bigger brands. Prine, always the modest mom & pop operation, didn’t seem to mind missing out on the big time. Now the Singing Mailman has dropped his last letter. He’s on his way to The Tree Of Forgiveness, the best little night spot in heaven, a place where his nine-mile cigarettes are lit by fans in the last row. The kind of place where a guy can have some fun.