How Will Candidates Get Nomination Signatures?

Those running for fall elections can now gather signatures. But how to do this during a pandemic? 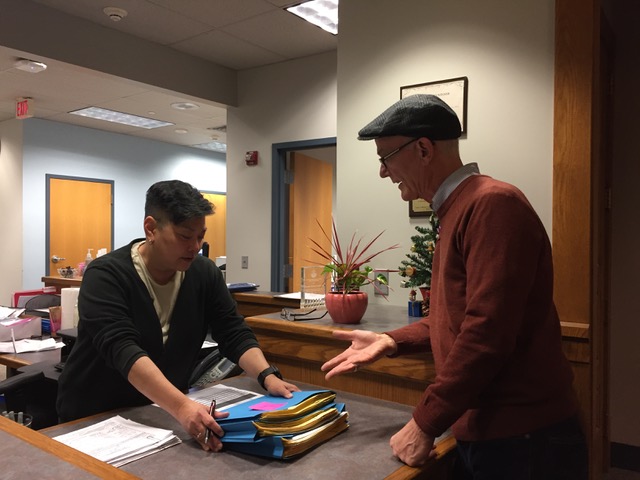 Before the ink has completely dried on Wisconsin’s 2020 spring election, the state is already moving ahead to the fall primary and general elections. Starting April 15, candidates for elected office can begin circulating nomination papers and collecting signatures — a process made much more complicated by the COVID-19 pandemic.

Normally, the process of collecting signatures involves knocking on doors and meeting voters face to face. It’s a chance for challengers to introduce themselves and incumbents to remind people who they are.

As it took up other pressing issues around the April 7 election, the Wisconsin Elections Commission spent part of a meeting last week discussing what guidance it would give to candidates on collecting the required 200-400 signatures for Assembly candidates and 400-800 signatures for Senate candidates.

“The issue of nomination papers and their circulation is a topic that’s been popping up from anxious candidates who want to start circulating papers on April 15,” WEC senior elections specialist Nathan Judnic said at the April 10 meeting. Candidates are worried about “how they can do that safely,” he added.

Elections commissioners discussed the possibility of electronic signatures, but dismissed the idea because they said it would be too difficult to verify.

“I don’t feel comfortable with electronic signatures,” Republican-appointed Commissioner Marge Bostelmann said. “If you’re looking at electronic signatures, you don’t have a verification as to who did it. How could you tell it was two different people that did the signing? We’re opening ourselves up to not being able to verify who the signers are.”

Ultimately, the WEC went the same route as it did for voting — to do it by mail. The commission unanimously passed a motion encouraging candidates to collect signatures by mail.

Under this guidance, campaigns and political parties now have to figure out the logistics of moving the process by mail.

In Assembly District 33, Democrat Mason Becker is challenging Republican incumbent Cody Horlacher. Becker says he’s gotten some guidance from the Assembly Democratic Campaign Committee (ADCC), but the process is still much more difficult than normal — another hurdle to leap in an election that’s now been filled with unexpected obstacles for candidates statewide.

“The Democratic Party of Wisconsin has been very good at communicating to people, helping campaigns transition to a digital format,” Becker says. “ADCC has plans where they’re going to help us get nomination signatures. You can’t go to a big group meeting and get a bunch of signatures all at once. You have to reach out and get signatures individually.”

The state parties are also assisting with trying to get the nomination form into the hands of as many people as possible whether that’s through the mail or email. However even this has added challenges, such as access to printers and stamps.

Where the state parties and campaign committees can’t help, the county parties can step in, using their local organizations and networks to get candidates the signatures they need.

But as campaigns and political organizations keep trying to work out the logistics, Becker said more action is needed to make this process easier. After tens of thousands of Wisconsinites were forced to go to the polls on April 7, Becker said the Legislature should change state law and allow for electronic signatures.

“As of right now the state Legislature has not taken up anything that would allow e-signatures to be valid,” Becker says. “They should recognize what this crisis is right now. In a state Assembly race, I have to get 200 signatures, you want to get more than that. Congressional candidates need to get more. For the good of challengers and incumbents, the state Legislature should look at some kind of online signature collection.”

Even if campaigns figure it all out with no legislative action, there’s still one final hurdle — turning the signatures in. Historically, candidates and campaigns will drive the stack of signatures to Madison to hand them directly to WEC staff. Obviously it’s difficult to maintain social distancing practices if the WEC office is full of candidates right before the June 1 deadline.

But, after the problems with the United States Postal Service the state just experienced with absentee ballots, it’s difficult to say candidates must mail in their completed nomination forms.

“How, with a straight face, can we tell people they have to rely on the mail? In a perfect world we’d like to think we could, in light of our lived experiences, we can’t,” Commissioner Ann Jacobs said. “Staff doesn’t want 100 or more candidates traipsing through their offices. So we’re going to have to come up with a safe way to do it at a distance. I don’t think we can realistically say let’s just put it in the mail and think we’re not going to wind up with candidates not making the cut.”

Candidates will start circulating nomination papers April 15 and have until June 1 at 5 p.m. to submit them.