Charting the Changes in State’s Prisons

Courts grinding to a halt, 39% drop in locking up those on probation, parole.

By Gretchen Schuldt, Wisconsin Justice Initiative - Apr 6th, 2020 05:17 pm
Get a daily rundown of the top stories on Urban Milwaukee

Advocates and medical experts around the country are urging prison officials to release low-risk incarcerated people from prison to stem the tide of the coronavirus, but prison populations in Wisconsin have declined just minimally, DOC figures show.

Wisconsin has experienced some success in reducing the number of people on probation and parole who were locked up for one reason or another. That number dropped 39 percent in about a month.

The coronavirus crisis has been well-established in the public consciousness for more than a month. Gov. Tony Evers declared a public health emergency on March 13; he announced on March 22 that the State Department of Corrections (DOC) would not accept inmate transfers from counties.

News about the dangers of coronavirus in prisons and jails specifically began appearing months ago; in January, the focus was on prisons in other countries, such as China; by early March, corrections officials in the United States were well aware of the dangers to incarcerated populations here.

Many court proceedings in the state have ground to a halt, meaning fewer people are getting sentenced to prison, which should contribute to declines in prison populations.

The charts below tell the story. The source for the charts is DOC inmate population counts. 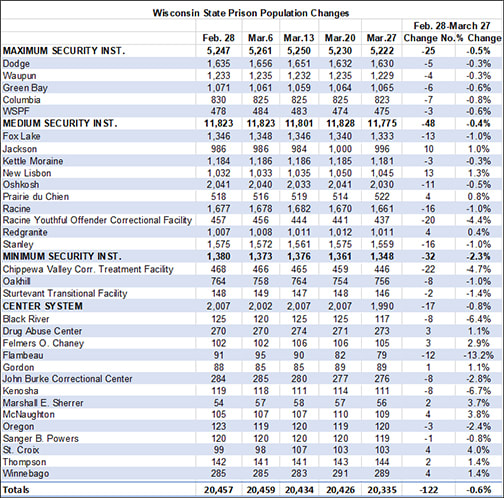 Men’s prisons: No surprise that the maximum security male population has barely budged; after all, these are the men considered the greatest threats to public safety. But the declines in the populations of men considered to be of lesser risk also are minimal. 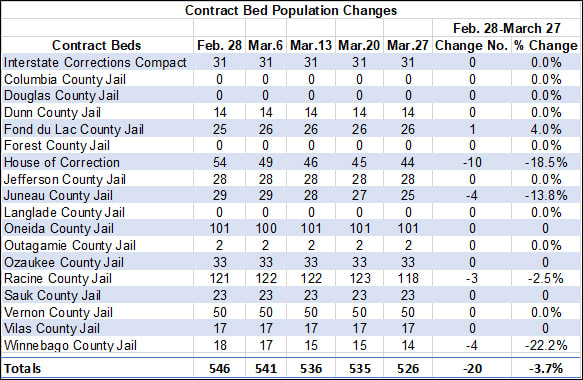 Contract beds: Little change: a decline of a whopping 20 people,  and the Milwaukee County House of Correction accounts for more than half of that total. Meanwhile, the DOC is not accepting inmates from jails. 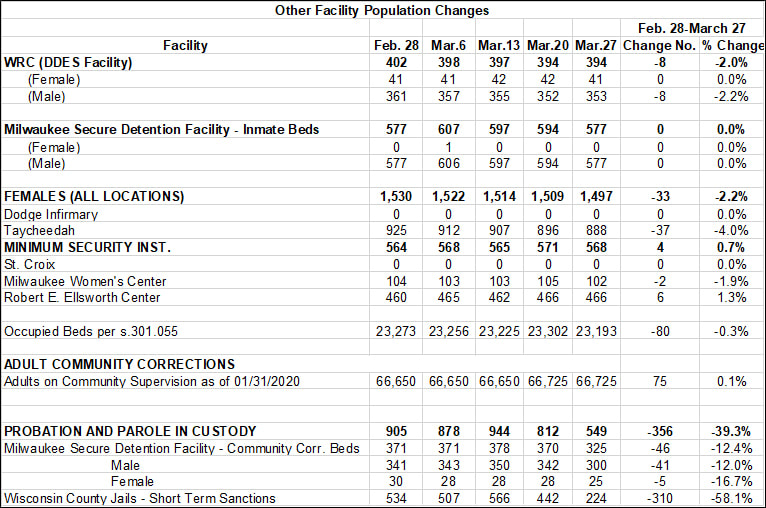 Other institutions: The number of people on community supervision who are in locked up has dropped significantly. The number of women serving prison sentences, though, has not dropped much, and the number in minimum security institutions has actually gone up by four.