DNR requiring the company to look further for pollution from forever chemicals.

By Danielle Kaeding, Wisconsin Public Radio - Feb 22nd, 2020 12:37 pm
Get a daily rundown of the top stories on Urban Milwaukee 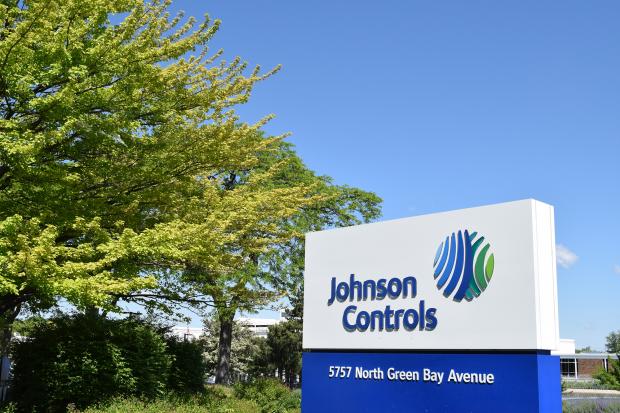 The Wisconsin Department of Natural Resources is directing a Marinette manufacturer of firefighting foam to expand its investigation of drinking water that might be contaminated by so-called forever chemicals known as PFAS.

There’s been growing concern about perfluoroalkyl and polyfluoroalkyl substances, commonly referred to as PFAS. The chemicals are found in products ranging from firefighting foam to nonstick cookware, and they’ve been linked to harmful health issues including cancer.

In letters this week, the DNR directed Tyco Fire Products and Johnson Controls International to sample drinking water wells for 36 PFAS chemicals over a larger area surrounding Tyco’s fire training center due to the volume and variety of compounds released there. The agency is also requiring them to sample drinking water wells near 61 fields in Marinette County, according to Christine Haag, the DNR’s director of remediation and redevelopment.

“The first thing we’ve asked them to do is conduct that sample of wells, contact those property owners and sample that drinking water to ensure that the drinking water isn’t impacted by PFAS,” said Haag.

The DNR is requiring the company to submit a site investigation work plan for greater sampling around its facility, a plan for providing water alternatives and an updated long-term drinking water sampling plan for the area. The agency expects Johnson Controls to inventory wells and contact homeowners in the expanded area around its facility within the next two weeks, with sampling slated to begin by April 1. 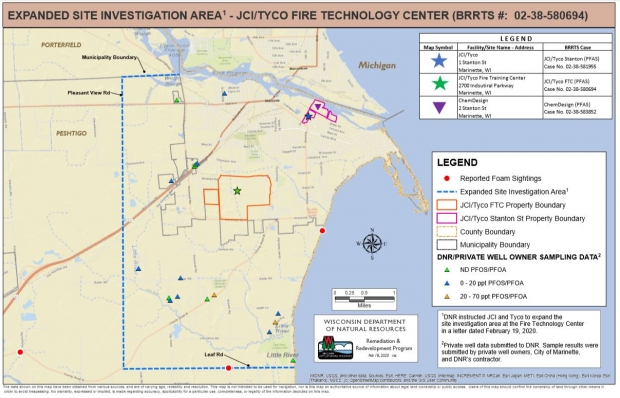 Map courtesy of the Wisconsin DNR

Johnson Controls will also conduct a survey of wells within 1,200 feet of 61 fields where treated sewage sludge, or biosolids, from the Marinette wastewater treatment plant has been spread. The city previously informed the agency it had found significant levels of the chemicals in the treated waste.

Around 240 landowners are within the affected area, according to figures provided to the DNR. Haag said Johnson Controls plans to send letters to landowners requesting access to conduct sampling by the end of this week.

Haag said the geology of the area, which includes fractured bedrock, and the nature of the chemicals makes people who rely on private drinking water wells susceptible to PFAS contamination. That sampling is expected to begin by March 3. The agency first directed Johnson Controls to submit a work plan for field sampling in July. The company provided its plan in November.

Once samples are submitted to a lab for testing, it may take up to several weeks before results are available.

“JCI will provide bottled water to all well owners whose wells are the subject of the testing upon the request of those well owners,” she said.

Johnson Controls has said its provided bottled water to 125 residents since November 2017 and installed 38 water treatment systems at homes with elevated levels of PFAS. Through last June, the company has tested 168 drinking water wells, of which 58 have tested positive for the chemicals. There have been 29 wells with PFAS levels greater than the Wisconsin Department of Health Services recommended groundwater standard of 20 parts per trillion.

Federal standards for drinking water have not yet been developed for the chemicals, but the U.S. Environmental Protection Agency has issued an advisory level of 70 parts per trillion. The agency announced Thursday that it’s moving forward on regulating two of the most widely studied PFAS chemicals – PFOA and PFOS.

Fraser Engerman, a spokesman for Johnson Controls, declined a request for an interview. He said the company is reviewing the letters from the agency.

Johnson Controls will also be required to report on its activities and submit a work plan investigating possible air, surface water and storm water pathways for the chemicals within 60 days.

State Rep. John Nygren, R-Marinette, issued a statement late Wednesday, saying that it was “unfortunate” that it took Johnson Controls months to address sampling of fields in the area.

“Last November, I called on JCI to conduct testing around fields in Marinette County that were historically used for landspreading of municipal wastewater treatment biosolids,” said Nygren. “These biosolids were contaminated with PFAS as a result of firefighting foam by JCI/Tyco. This testing is critical to determining the extent of contamination in Marinette County. JCI’s refusal to comply with the DNR’s request unnecessarily delayed a resolution for affected citizens.”

The DNR referred the company to the state Department of Justice last May, alleging the company failed to report and take action to address contamination.

The Milwaukee Journal Sentinel found Tyco knew of soil and well contamination at its facility in 2013 — long before the company reported they may have spread from its fire training facility. A spokesman told the newspaper there wasn’t the same level of awareness at the time surrounding the chemicals.