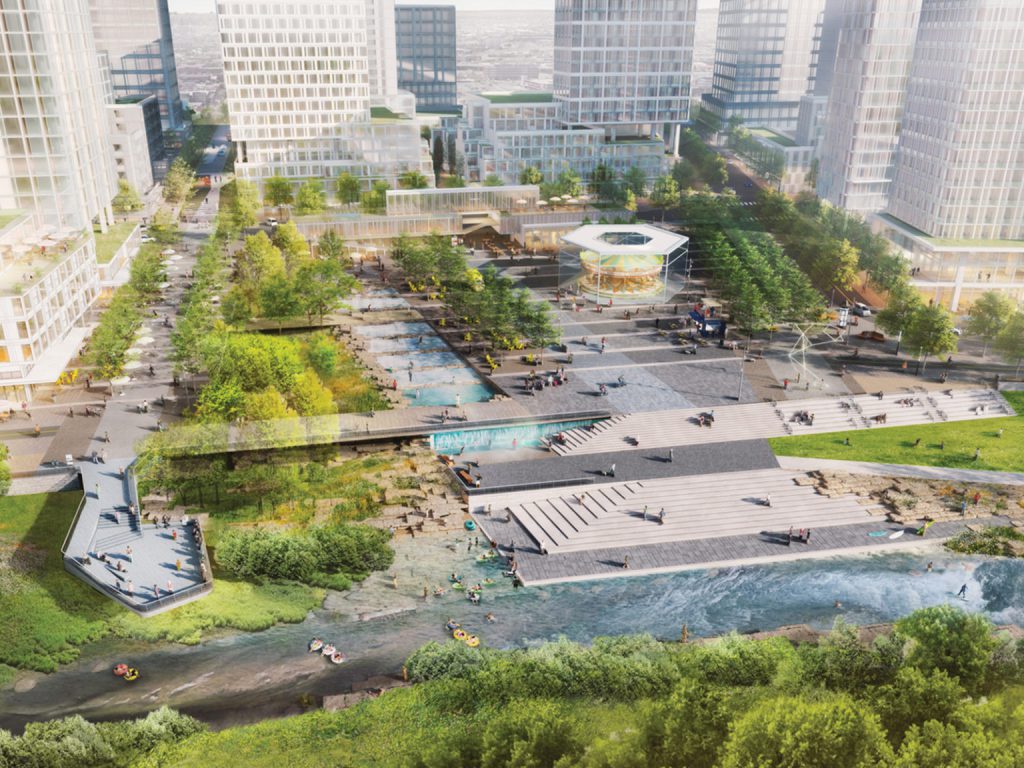 Denver’s massive riverfront redevelopment: Over the next 25 years, River Mile, a new development proposed along the South Platte River in Denver, may add between 12 and 15 million square feet of commercial and residential property to the city, equating to about 20% of the available space that currently exists downtown. The plan is to add 15,000 residents and connect downtown to its long-neglected waterway in the image of image of tall, thin towers and small city blocks inspired by Vancouver, BC, not far from where developer Rhys Duggan grew up. (Robert Sanchez | 5280 Magazine)

Plans for a new, old, Federal architecture: A draft executive order was discovered that would rewrite the Guiding Principles for Federal Architecture, issued in 1962 and written by former Senator Daniel Patrick Moynihan, to ensure that “the classical style shall be the preferred and default style” for new and upgraded federal buildings. Entitled “Making Federal Buildings Beautiful Again” the draft order argues that the founding fathers embraced the classical models of “democratic Athens” and “republican Rome” for the capital’s early buildings because the style symbolized the new nation’s “self-governing ideals.” The order is found just after GSA’s chief architect and the director of the Design Excellence Program resigned and faces stiff opposition from the American Institute of Architects. (Cathleen McGuigan | Architectural Record)

Organizing disparate transit agencies with one vision of connectivity: CA State Assemblyman David Chiu aims to unite the San Francisco Bay Area’s 27 transit agencies to help boost ridership. His new bill, The Bay Area Seamless Transit Act, will require cities and counties to charge the same bus fare, to apply the same discount for people transferring from one bus line to another, and to define populations, such as youths and seniors, in the same terms. The legislation would also require a unified regional transit map and universal fare collection via Clipper card and smartphone apps. Chiu claims that the complexity of transit ridership in the Bay Area is intimidating, thereby hindering ridership. By uniting the system, he hopes Bay Area’s transit will rival those of London or Tokyo. (Rachel Swan | San Francisco Chronicle)

Unaffordable rent is the new normal: The number of US households living in rentals surged to 43.7 million in 2018, up 21% from 2004. Of those, some 21 million are cost-burdened, defined as spending more than 30% of their income on housing. This number is 2.8 million more than it was during the 2008 recession. High-income renters have since flooded the US market, having either lost their homes or unable to afford to buy; households earning at least $75,000 per year accounted for three-quarters of the growth in renters since 2010, leading to higher rents. Property prices for rental apartments have now reached record highs, rising 150% between 2010 and late 2019. (Carey L. Biron | Reuters)

All-Electric movement picks up speed: Berkeley, CA, became the first city in the US to ban natural gas hookups in new construction last July, and the movement is quickly gaining steam elsewhere in the country. All-electric construction is now being mulled in large cities like Los Angeles, San Francisco, and Seattle, as well as small towns like Brookline, MA, which passed a prohibition on new gas connections. While some developers in California are enthusiastic for these regulations, some believe that these new rules are being put in place too quickly. Some are worried if buyers will be attracted to developments without gas stoves. In response, some cities like San Jose are encouraging electric wiring and appliances with building codes, but not banning gas outright. (Jane Margolies | New York Times)

In meetings, the Amazon.com Inc. chief [Bezos] expressed envy for how Musk had pitted five Western states against one another in a bidding war for thousands of manufacturing jobs; he wondered why Amazon was okay with accepting comparatively trifling incentives.

This week on the podcast, Director Alice Bravo and Assistant Director of Miami Dade Department of Transportation and Public Works join to talk about innovation in Miami.