Bipartisan bill ready to pass but gets hijacked by Republicans adding provisions on school choice, ICE.

By Melanie Conklin, Wisconsin Examiner - Feb 5th, 2020 12:35 pm
Get a daily rundown of the top stories on Urban Milwaukee 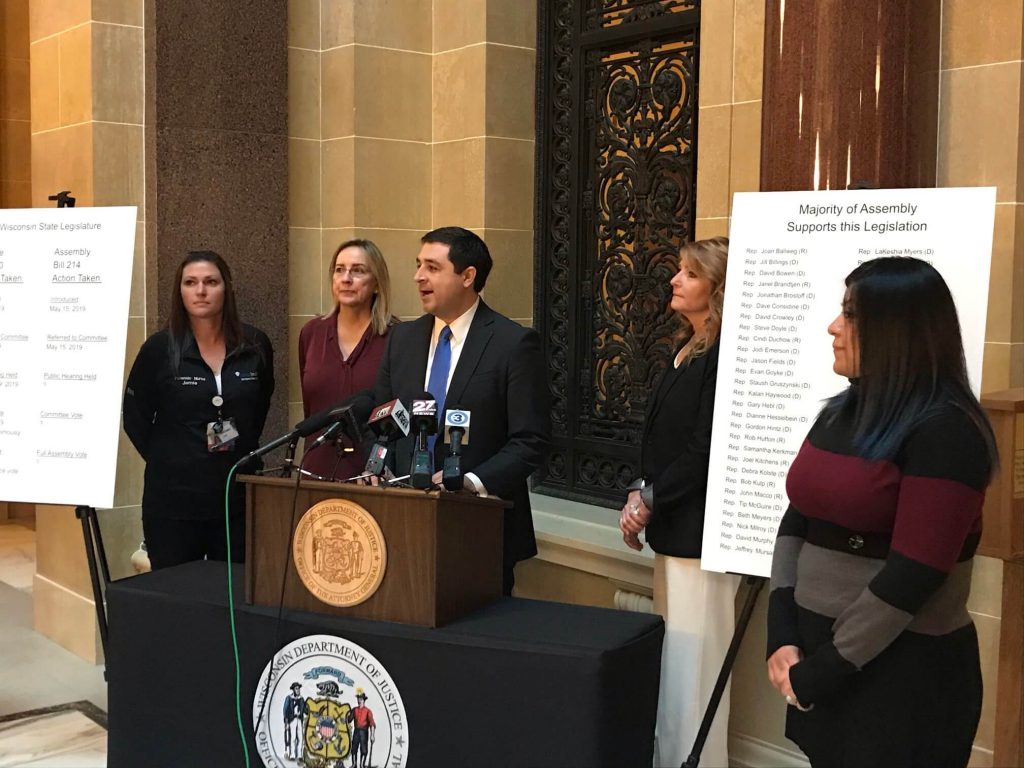 Attorney General Josh Kaul advocates for a law to prevent another backlog of untested sexual-assault kits at a Capitol news conference on Dec. 3 2019. Photo from the WI DOJ.

Can legislators take bipartisan bills designed to keep rapists off the street and help victims of sexual assault, and turn them into political poison that will never become law?

Seem improbable? Not in Wisconsin.

This controversial, partisan bill will have a public hearing Wednesday, Feb. 5 at 11 am before the Assembly Committee on Health.

Steffen had already authored two bipartisan bills to eliminate the backlog of sexual assault kits, which were passed by the entire state Senate on a voice vote in October.

One of them — AB 214 — would prevent the backlog by creating standards for transmission, processing and storage of the kits.  A second bill — AB 358 — sets up the Wisconsin Sexual Assault Kit Tracking System, a database to provide victims access to information on the status of their kits.

Since passing the full state Senate, however, the bipartisan  bills have been sitting untouched in the Assembly Committee on Health. Gov. Tony Evers urged lawmakers in the Assembly to send him the bills, and Attorney General Josh Kaul aggressively pressed health committee chair Joe Sanfelippo (R-New Berlin)  to schedule the bills and move them forward.

After weeks of no movement, last Thursday the new, hyper-partisan bill was unveiled even though Republicans can be certain it will not get support from Democratic legislators and Evers due to the ‘poison pill’ clauses.

Sanfelippo said that the divisive bill is the one he will move forward — even though it stands little chance of becoming law. This could leave Wisconsin open to a repeat scenario of 2014 when there were 7,000 untested kits languishing in storage.

“AB 214 would help prevent Wisconsin from having another backlog of untested sexual assault kits,” Kaul said of the bipartisan bill. “It’s backed by law enforcement, medical professionals, and advocates for survivors, as well as the State Senate and a majority of the State Assembly.”

A standoff began in early December when the bipartisan legislation had gone nowhere in the Assembly for nearly two months after the Senate approved the bills. The attorney general held news conferences outside committee chair Sanfelippo’s office and at city hall in his district to push Sanfelippo to take action on the bills. 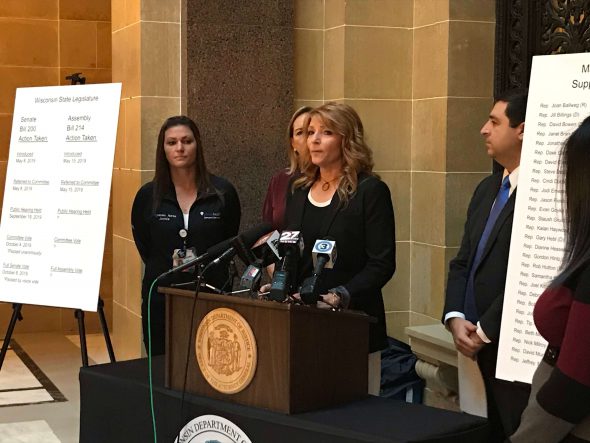 Jacqueline Jaske, a sexual assault survivor, shares her story at a Capitol news conference with AG Josh Kaul. Photo from the WI DOJ.

At the conference there was passionate testimony from Jacqueline Jaske, a survivor who was raped 25 years ago after a man followed her and her five-year-old son home from a grocery store in West Allis, assaulted her and told her young child that if he screamed he would kill his mother.

Jaske now volunteers helping train those who work with sexual assault victims, particularly on the difficult necessity of the “humilation of a rape kit,” explaining that hers ended up being critical in convicting her assailant.

Shortly after those news conferences, Sanfelippo told the Associated Press he would hold a hearing on the bill. Another six weeks went by with no movement.

On Jan. 23, Kaul released correspondence from Sanfelippo (with the recipient’s name removed), where the committee chair indicated that he is actually opposed to the bipartisan rape-kit bills.

Kaul’s release labeled this letter an email of “falsehoods” — which he went on to rebut point by point — saying Sanfelippo “flip-flopped” on his promise to hold a hearing on the bipartisan bills.

From the DOJ release:  “According to reporting by the AP on December 3, 2019, ‘Rep. Joe Sanfelippo, chairman of the Assembly Health Committee that has the bill, said he planned to hold a hearing on it and expected it would pass before the end of session….’ In an email recently obtained by the Wisconsin Department of Justice (DOJ), however, Rep. Sanfelippo expressed opposition to 2019 Assembly Bill 214/2019 Senate Bill 200. Much of the information Rep. Sanfelippo provided in the email is false.”

Neither Steffen or Sanfelippo responded to requests for comment, but Steffen labeled the new bill a “door number two option for the Assembly” in an interview with the Wisconsin State Journal. And Sanfelippo called it a “better bill, comprehensive” and scheduled it for a public hearing.

Steffen’s new bill makes student victims of sexual assault eligible for the School Choice voucher program even if their income would not normally qualify them for it and requires ICE cooperation if an undocumented person is arrested — not convicted — for sexual assault.

It also includes other measures where bipartisan consensus could be possible such as a 90 day condensed timeline for testing, a Department of Justice annual report to the legislature on the kits and allowing victims to anonymously track their sexual assault kits and be notified 60 days before evidence is destroyed.

Democrats were furious with the new bill that appears to have derailed bipartisan progress.

“Rep. [Robin] Vos has brought partisan politics to a new divisive height, and seems to be derailing any bills with Democratic co-authors,” asserted Reps. Chris Taylor (D-Madison) and Melissa Sargent (D-Madison) in a joint statement. “We sincerely urge Republicans in the Assembly to reject this partisan and divisive bill and demand action on the strong bipartisan bills already introduced. …The people of this state expect us to work together to solve critical problems, and they, especially those that have experienced sexual violence, deserve better.”

Assembly Democratic leader Gordon Hintz (D-Oshkosh) also condemned the introduction of the new, partisan bill, noting that the original bills were a product of months of stakeholder engagement, including input from law enforcement and experts at DOJ.

“Republicans are choosing to politicize what should be a straightforward, bipartisan bill,” stated Hintz. “This issue impacts real people in a serious way. Playing these political games does a disservice to victims and the law enforcement professionals who work on their cases. We already have a bill that does what needs to be done to address the backlog of sexual assault kits and ensure efficient testing moving forward. This is more of the same cynical politics from Robin Vos and Wisconsin Republicans, and the people of our state deserve better.”