The Story of Donut Squad

Local entrepreneurs so successful they sell out some mornings by 10 a.m. 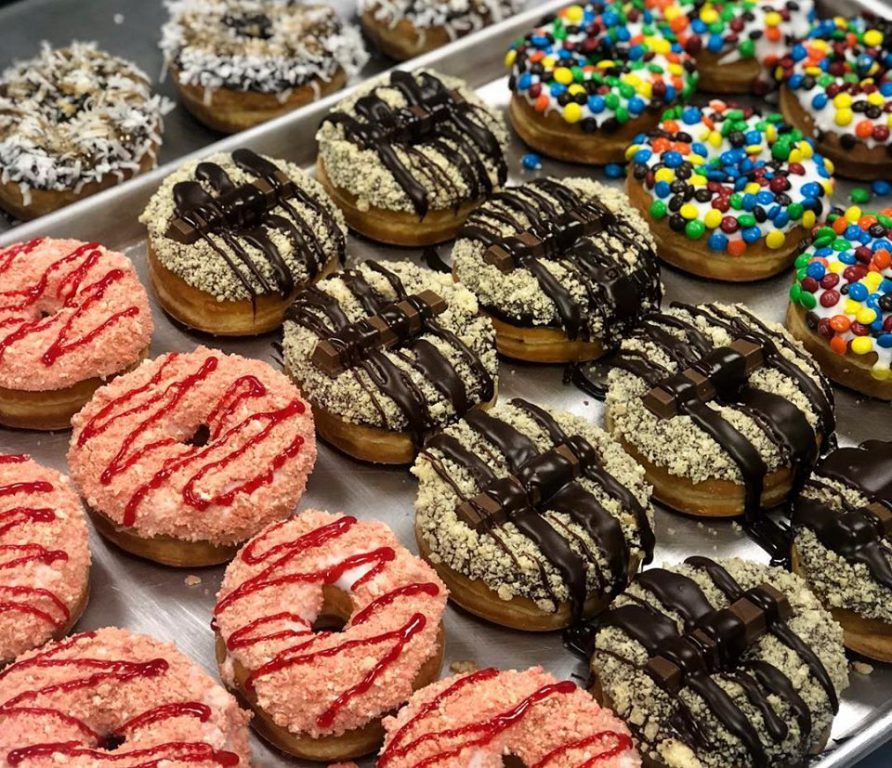 Milwaukee has a well-deserved reputation as a foodie town. You can get just about any food you crave in the city, from ethnic to traditional to straight-up gourmet. But maybe not enough donuts.

Donut Squad was created in response to this situation.

A couple of UW-Milwaukee seniors opened the first Donut Squad four years ago at 2264 N. Prospect Ave. on Milwaukee’s East Side — on Prospect and North in the Clock Tower Building. In 2019, Donut Squad expanded to a new location at 308 W. Broadway in downtown Waukesha.

The business has been wildly successful.

“We didn’t think it would be as overwhelming,” said Barakat “Bobby” Kaid, 25, one of Donut Squad’s co-owners. “My family is in a lot of businesses, and I thought it would be easy to run and manage.” He and his partner Moe Dakwar planned to pursue full-time careers, Kaid in healthcare administration and Dakwar in marketing, while running the donut shop. But Donut Squad’s product quickly became so popular that “it was either take it up full time or not develop it into what I wanted it to be,” Kaid said.

Their problem, if you can call it that, is that they make really good donuts.

The donut choices in Milwaukee can be limited. You may find specialty donuts at a Milwaukee food hall, but unless you like heavy, dense donuts that are a bit like chewing wet cement, those are going to be a one-off.

The Donut Squad is a little different. Kaid and Dakwar didn’t just buy a recipe or plop down some cash to open a franchise. “Our families were both really into baking,” Kaid said, “so they helped us with the experimenting and figuring out a good recipe.” And like many successful businesses, Donut Squad was created in response to a need. “We wanted to specialize in donuts,” Kaid said, “because we noticed there wasn’t any donut shops around our area, in Milwaukee especially.”

Donut Squad’s products are light but satisfying. They have a great homemade taste. And Kaid and Dakwar are not afraid to innovate. “When we first opened,” Kaid said, “we started with maybe 4 or 5 different kinds. The specialty ones were popular, so we kept expanding, trying to figure out new flavors.” Often, new flavors are in response to customer suggestions. Kaid and Dakwar try a new flavor out for about a month before deciding whether to put it on the menu.

Kaid said they “mix it up on Sundays” by using customers’ favorite cereal brands as toppings.

For customers, that is the Donut Squad challenge. Though hours are listed as 6:00 a.m. to 1:00 p.m., a sign on the door informs customers that Donut Squad closes when it runs out of donuts, and quite often, even during the winter months, that can be as early as 10:00 a.m.

In other words, there is no excess, no waste product being produced by Donut Squad. You can’t walk into one of their stores at 3:00 p.m. to buy a stale donut that could double as a hockey puck.

However, Kaid and Dakwar are always responsive to customer demand. During the summer months, Donut Squad is open during downtown Waukesha’s Friday Night Live music event. At the East Side location, Donut Squad is open on Friday and Saturday nights throughout the year for what Kaid called the “late-night student crowd.”

Donut Squad now employees a small staff of bakers to meet this demand, workers who come in as early (or late, depending on your point of view) as midnight and work until 5:00 a.m. “Sometimes they’re still finishing when I open,” Kaid said. Donut Squad’s employees are “college kids with afternoon classes or people juggling two or three jobs,” he said. “There’s more [employee] turnover at the Waukesha location.” In Milwaukee, “we get people who ask for jobs,” Kaid said.

Currently, there are no plans to expand to other locations. Meanwhile, if you are someone who has always wondered why it’s so hard to get a good donut in metro Milwaukee, you might consider becoming part of the Donut Squad.

A version of this story was first published by the Wisconsin Muslim Journal.