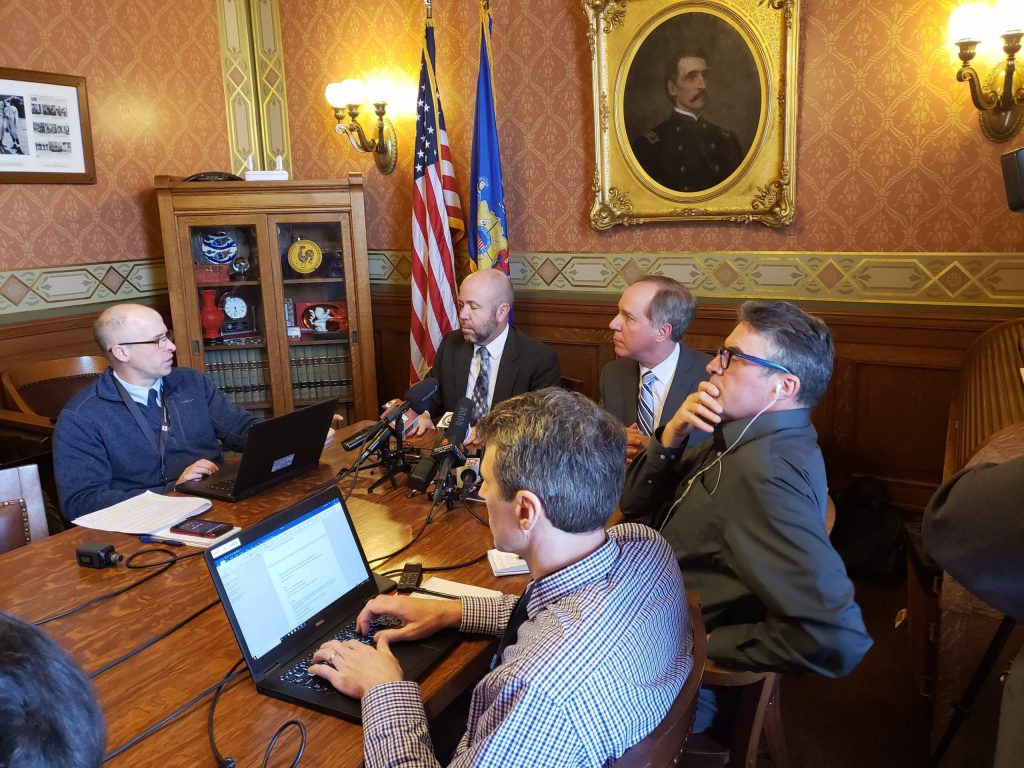 In the first Assembly floor session of the new year, the Republicans who make up the majority lost their second veto-override attempt and passed a series of controversial bills that would make it easier to terminate parental rights and streamline the process for adopting children who have entered the child welfare system.

It was an afternoon that began with Speaker Robin Vos’s evocation of bipartisan ambitions but quickly showed that the legislature is as deeply divided as ever on all but the most anodyne pieces of legislation.

The fact that there were only two rounds of extensive debate suggested just how preordained the polarized outcome was from the start. While Vos’s deputy, Assembly Majority Leader Jim Steineke had predicted otherwise in a half-hour salon with the Capitol press corps just before the opening gavel, the way it unfolded showed every sign that he and Vos knew better.

“We should have a good, bipartisan day,” said Steineke, after Vos and their Republican colleagues walked through the outline for the afternoon and thumbnail sketches of the GOP case for their priority items for the session.

At the top of the list was the attempt to override Gov. Tony Evers’ veto of AB-76, which would delete the state requirement that certified nursing assistants must have at least 120 hours of training, and would forbid the state from requiring more training than the federal minimum, currently 75 hours.

Citing appeals from long-term health care providers who complained that the state’s more stringent standard contributed to a shortage of CNAs, Assembly Republicans along with a handful of Democrats passed the measure last year. Advocacy groups for patients, the elderly, and workers all spoke out against the change. In the Senate, the vote in committee split along party lines while the full Senate concurred with a voice vote and no recorded dissent.

Gov. Evers vetoed the bill Nov. 20. “I object to providing less training for those who care for our state’s most vulnerable citizens,” he declared in his veto message. “There are better ways to address the shortage of nurse aides than reducing the quality of training program.”

Wednesday’s floor debate largely relitigated the arguments for and against reducing the state’s requirement.

Vos, citing a survey of the profession, said as many as 20% of CNA jobs “go unfilled” and compared Wisconsin’s standards to those of neighboring states that use the lower federal minimum. “Here’s an opportunity for us to be more like Minnesota, Michigan, and Iowa, who have the exact same standards as in the bipartisan bill we voted on before,” Vos said. “This does not impact the quality of care.”

Moments after appealing to bipartisanship, Vos skewered Evers and suggested without citing evidence that Assembly Minority Leader Gordon Hintz (D-Oshkosh) had threatened Democratic lawmakers to fall in line in order to protect the veto, because three Democratic votes would be needed to clear the two-thirds majority needed for an override.

Vos addressed three Democrats (by district number, not by name, in accordance with Legislature etiquette) who had voted for the bill back in May. “Unfortunately Gov. Evers has put you and us in a very difficult decision today,” said the Assembly speaker. “You kept your word. You voted for it on the floor. When you give your word to your constituents and you change it that’s what you call a lie.”

After more back and forth among several lawmakers, Rep. Steve Doyle (D-Onalaska) took umbrage at Vos’s shaming tactic.

“I voted for it the first time,” said Doyle — but resented being attacked as a “liar” or “a flip-flopper” in the words of another Republican. “That doesn’t help the discussion,” he said. “When people shift from the merits of the case to calling names, you know they’re losing the argument.” After considering the larger issue of a labor shortage of CNAs and the arguments against the bill, he said, “I will vote to sustain the governor’s veto, because this is not a silver bullet.”

For the next 13 bills, the body raced through voice votes with no dissent or debate. On the next one, AB-490, repealing restrictions on local levy limit increases, the only floor discussion consisted of an objection from  Rep. Dianne Hesselbein (D-Middleton). Her assertion that an amended version of the measure made it unworkable went unrebutted, and the bill passed with just one Democratic vote.

Then came the first of a group of bills centered on adoption, termination of parental rights (TPR), and Children or Juveniles in Need of Protective Services (CHIPS and JIPS, respectively).

The package, growing out of an Assembly Speaker’s Task Force on Adoption appointed last year, was another occasion for Vos to boast of bipartisanship.

In his media confab before the floor session, Vos said the prospect of seeing the bills reach the floor “one of my favorite parts of today” and that the package “is one of those examples where I am very optimistic for bipartisanship today.”

The task force included Republicans and Democrats, but as the bills — which have already sparked criticism in Senate and Assembly committee public hearings — unfolded Wednesday, it was clear that divisions had arisen.

The floor debate centered on just one measure, AB-559, as amended. The bill eliminates, with limited exceptions, the current right to a jury trial during the fact-finding phase of an involuntary termination of parental rights (TPR) proceeding for parents whose children have been classified as children in need of protective services (CHIPS) and makes other changes in the procedure for reviewing the permanency plans of children removed from their homes.

It also adds new grounds for involuntary TPR: If a newborn child is ruled “drug-affected” and the parents fail to enroll in and comply with drug treatment within 90 days, or if the child’s parent is in prison and expected to remain there for “a substantial period” of the child’s life up to adulthood.

Proponents of the bills offered them as a means to bring more certainty to children who had been removed from their homes because of parental abuse or neglect or other circumstances that required them to be put in protective services.

“We have come to shift from total disregard for biological parents to overcompensating and favoring parents of their children at a cost of [the children’s] well-being,” said State Rep. Barbara Dittrich (R-Oconomowoc), who chaired the adoption task force.

But State Rep. Lisa Subeck (D-Madison), who served as the task force vice-chair, said while the group had “started off on the right foot” to develop bipartisan proposals, in the end “I think we got halfway there.” At some point, Subeck charged, “these bills were taken out of the hands of the task force.” Specifying that she was not criticizing her colleague Dittrich, she added, “this is directed at the speaker — mainly at the speaker’s office. I don’t know what happened at the end and I don’t know why it happened. If we had a good set of bills, we would have come up with a bipartisan package of bills we call could have supported.”

The debate that unfolded showed two starkly different worldviews of troubled families. Some legislators called for holding parents responsible and, if need be, using the threat of family separation as an incentive for troubled parents to seek help.

“What we’ve got to do is say, what is in the best interest of these children?” said State Rep. David Murphy (R-Greenville). That won’t happen, he added, “if we don’t make people stand up and be accountable for what they do.”

But others suggested that the proposals were a step backward, punishing poverty and punishing people for addiction in ways that would drive them away from the help and care they needed.

State Rep. Chris Taylor (D-Madison) said that subjecting pregnant women who abused drugs or alcohol to the threat of TPR went against the current thinking in substance abuse treatment and treatment for women with drug problems who were pregnant, discouraging them from seeking prenatal care.

State Rep. David Crowley (D-Milwaukee) said that black families such as his own and his constituents have been particularly victimized by mass incarceration and could suffer disproportionately by efforts to preemptively terminate parental rights for parents in prison.

“We can’t continue to think that if we’re going to continue to be ‘tough on crime’ or ‘tough on addiction,’ we’re doing the best we can,” he said.

When the roll call came, the bill passed 61-37, again on mostly partisan lines.

Most of the remaining adoption bills passed on voice votes. Some — such as one expanding adoption assistance programs and other codifying open adoption — drew few “nos,” but others passed despite audible opposition. The next to last vote in the package, on AB-565, passed 64-34 after only a brief debate. It removes a presumption that in changing placement, it is not automatically in the child’s best interest to be placed with a relative.

And then the final bill, AB-566, allowing TPR proceedings to be filed as part of cases where children or juveniles are deemed in need of protection, instead of separately, passed with only a voice vote, with again the audible voices of dissenters.

Bipartisanship may not have won the day, but partisanship, it appeared, had left the body worn out.