Hundreds of Wisconsin buyers heading to Illinois now that it has legalized marijuana.

By Corri Hess, Wisconsin Public Radio - Jan 3rd, 2020 10:57 am
Get a daily rundown of the top stories on Urban Milwaukee 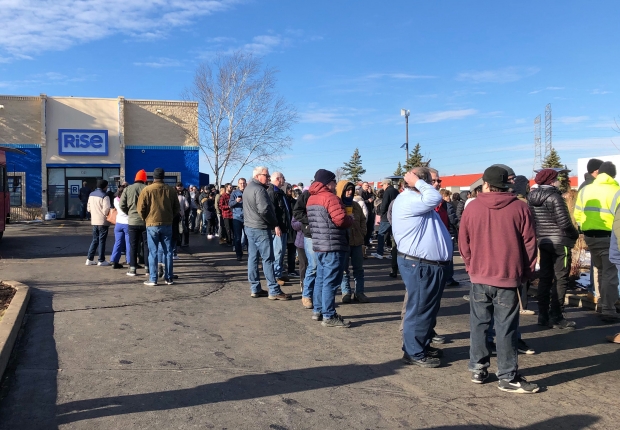 Hundreds of people have been waiting in line at RiSE in Mundelein, Illinois, the closest dispensary to Wisconsin, since New Year’s Day to buy legal marijuana. Photo by Corrinne Hess/WPR.

Any changes to Wisconsin’s current marijuana policy appear unlikely, with state lawmakers recently saying they won’t consider a proposal to allow medical use. But that isn’t stopping state residents from going to Illinois to buy legal weed.

On Wednesday, more than $3 million in marijuana was reportedly sold on the first day of legal sales of recreational pot in Illinois.

Trent Yager, of Kenosha, waited outside of RiSE in Mundelein, Illinois, on Thursday with his father. It’s the closest dispensary to Wisconsin. Yager said he planned on buying a few plants.

“I’m not a regular user, I just wanted to try it out and see if I liked it,” Yager said.

Tara, who didn’t want to give her last name, said she has never used drugs before. But she drove to RiSE to see what a dispensary was like and buy some edibles.

“It’s exciting,” Tara said. “Obviously, yesterday was probably insane, but it is part of history.”

While hundreds of Wisconsin residents are headed south to purchase legal marijuana, it’s still illegal in Wisconsin to possess the drug.

Brendan Blume, vice president of store development at RiSE, said the amount people can buy depends on if they are Illinois residents or live out of state.

“Thirty grams to 15 grams in state, it’s about half for out of state,” Blume said. “If people buy it in the state of Illinois, they have to consume it here.”

The Kenosha County Sheriff’s Department said it will continue to operate as normal enforcing state and local laws and ordinances.

Kenosha County Sgt. Chris Hannah said there are no plans to increase patrol. Hannah said no marijuana arrests or citations have been issued since New Year’s Day.

Democratic Gov. Tony Evers‘ state budget would have eliminated civil and criminal penalties for possession of up to 25 grams of marijuana and legalized medical marijuana. Republicans stripped those provisions from the budget, saying Evers’ plan was really about decriminalization.

It is January 1, 2020. Marijuana, in some form, is legal along most of our border. It’s like they’re all pointing and laughing at us. The mockery is earned.