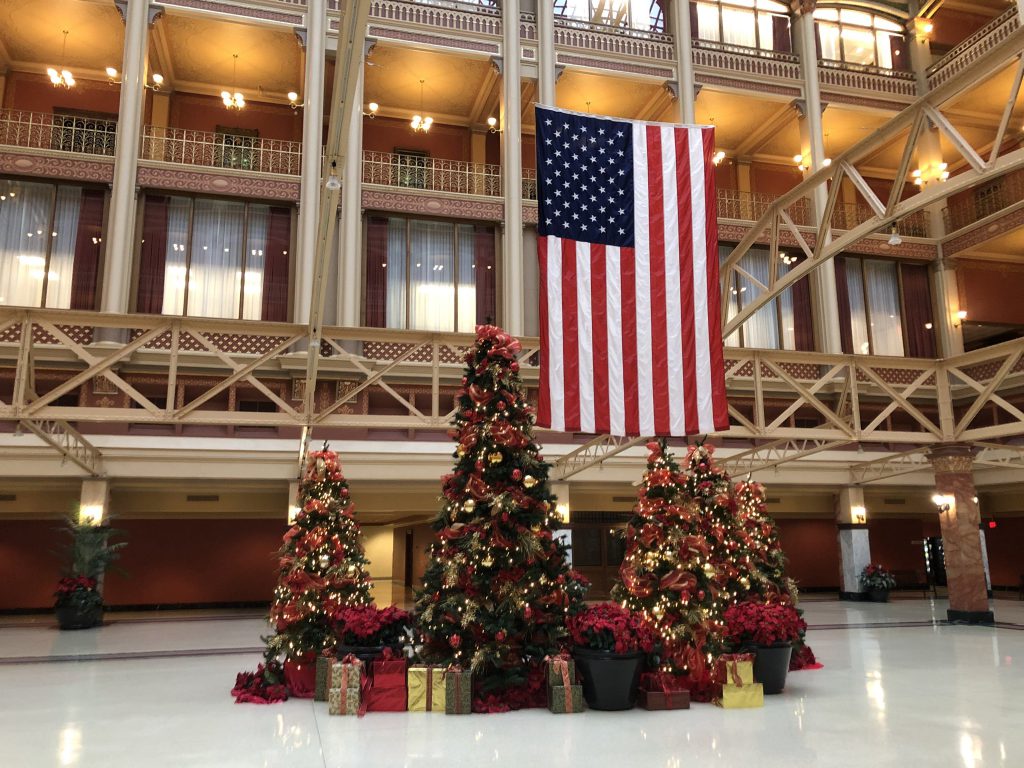 The Christmas trees at Federal Courthouse. Photo by Jeramey Jannene.

Let’s peek at the Christmas lists of some top Wisconsin officials.

*Gov. Tony Evers: The first-term Democrat needs the state’s healthy economy to continue, so he can recommend another big increase in spending on K-12 schools in the 2021-23 budget he will prepare late next year. An economic downturn would force tough choices on Evers just as is expected to announce that he will seek a second term.

State tax collections were up 7.1 percent in the first five months of this fiscal year, partly because of a 56 percent jump in corporate tax collections that resulted from the federal tax-reform act that cut taxes on business. Lower federal taxes means higher profits and higher state taxes.

Evers could also use a seminar from the longest-serving Democrat to serve as Assembly speaker, Tom Loftus, on how to work with the Legislature. Evers, his top aides and Republicans who control the Legislature did not get along this year.

*Evers cabinet secretaries: Several cabinet secretaries — including those who run the Health, Transportation, Tourism and Safety and Professional Services departments — wish they would learn that Republican senators plan to confirm them next year.

*Milwaukee Mayor Tom Barrett: Besides winning re-election in April, Barrett wishes for a July 13-16 Democratic National Convention in Milwaukee free of headline-grabbing crimes and scandal. If Milwaukee can project itself to the world as a vibrant city that safely launched the campaign of the next president, the mayor will rejoice.

*Assembly Speaker Robin Vos: The Republican speaker would like to defeat three or four incumbent Democrats, so he Vos would lead a veto-proof majority of 66 or 67 Republicans in the 99-member Assembly in January 2021.

*Assembly Democratic Leader Gordon Hintz: He would like his party to regain six or seven seats in November elections, putting them within striking distance of regaining the majority in 2022 elections that will occur after new legislative district lines are drawn.

In a year-end WisconsinEye interview, Hintz said Democratic candidates should run on Republicans’ failure to expand Medicaid health care to more middle-income residents, their failure to consider gun-safety laws and their failure to legalize medical marijuana.

*Senate Democratic Leader Jennifer Shilling: Her wish list includes a strong Democratic challenger to first-term Republican Sen. Pat Testin, of Stevens Point, and the retirements of Republican Sens. Luther Olsen, of Ripon, and Robert Cowles, of Green Bay. If Senate Democrats won all three of those seats, they would control the Senate.

However, that assumes that two Senate Democrats keep their seats: First-term Democratic Sen Patty Schachtner, of Somerset – the top target of Senate Republicans – and Sen. David Hansen, of Green Bay.

*Joel Brennan, secretary of the state Department of Administration: Brennan would like Foxconn to make good on its 2017 promise to create thousands of jobs at its Racine County manufacturing campus and around the state.

Brennan last month warned Foxconn that its scaled-down plans for the Mount Pleasant plant would not qualify for state tax credits, if state government and Foxconn don’t renegotiate the 2017 deal approved by Republican Gov. Scott Walker and GOP legislators. That deal promised Foxconn up to $3 billion in state aid, depending on jobs created and investments.

*UW-Platteville Chancellor Dennis Shields: He’d like to be named the next UW System president, and is one of a few chancellors to apply for the job. And didn’t he accompany Evers on the governor’s first trade mission earlier this year?

You don’t need to get anything for one elected official. He already has had a good Christmas.

One by one, potential challengers to Fitzgerald for the Republican nomination – Sen. Chris Kapenga, former Lt. Gov. Rebecca Kleefisch, Waukesha County Executive Paul Farrow and Matt Walker, son of the former governor – have said they won’t challenge Fitzgerald in a primary.