How We View Undocumented Immigrants 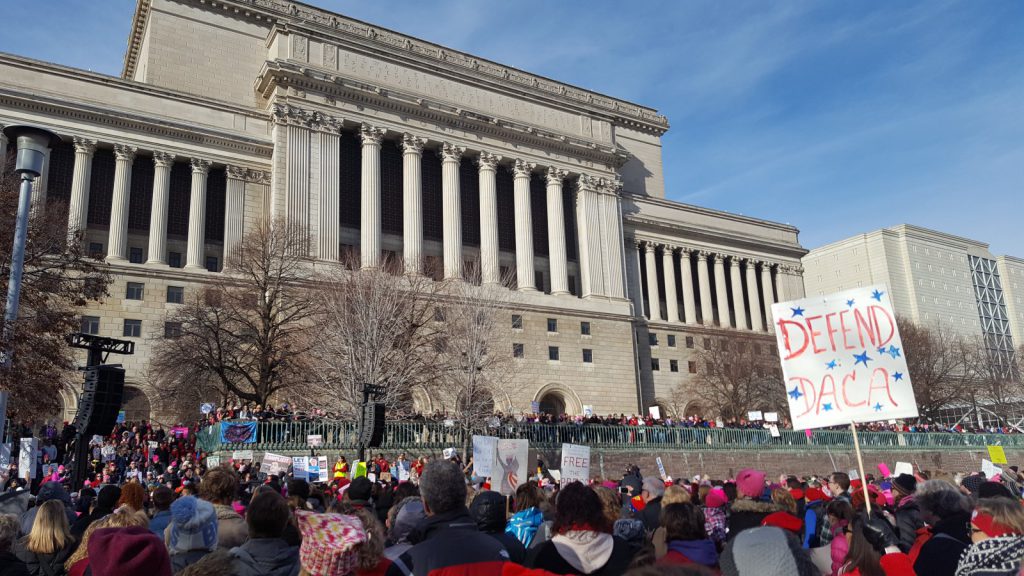 A participant in the 2018 Women’s March carries a “Defend DACA” sign. Photo by Laura Thompson.

Between 2012 and 2018, the Marquette Law School poll periodically asked Wisconsin voters for their “view about undocumented immigrants who are currently working in the U.S.” The respondents could choose one of three answers: The immigrants should be

Over the years, more than 15,000 state residents answered this question. The chart below shows the number picking each of the three options. (The small number who either refused to answer or said they didn’t know are not included.) 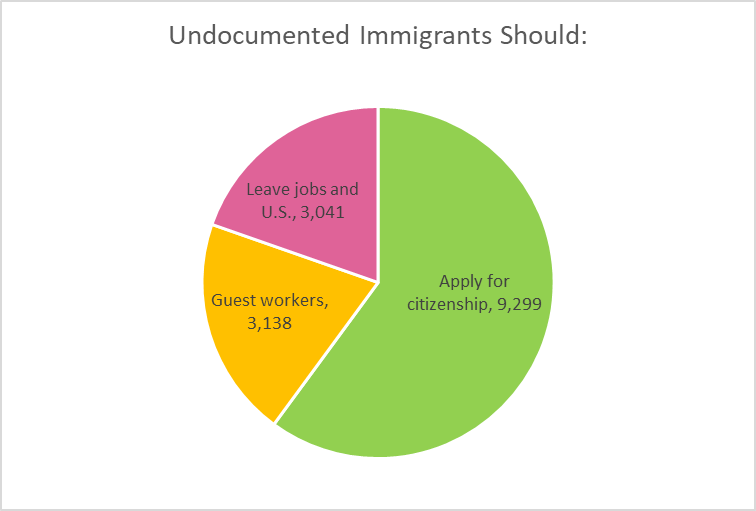 The next chart shows the results by party preference the last time this question was asked, in October 2018. Not surprisingly, Democrats overwhelmingly favor letting undocumented immigrants stay and apply for citizenship. More surprising are the results from Republicans. Half of them would allow the immigrants to stay and only a quarter would send them packing. (These numbers include just the self-described Republicans; independents who leaned Republican are counted as independents.) 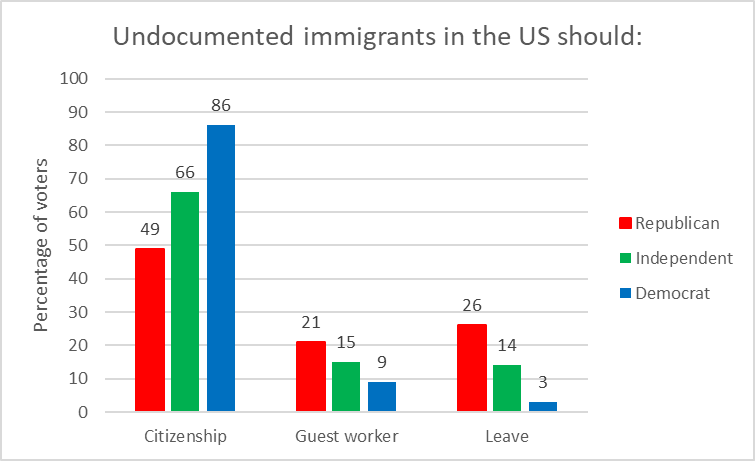 Undocumented immigrants in the US should:

The next graph shows the answers from self-declared Republicans on a sample of polls over time. Generally, a plurality supported a route to citizenship, but the results jump around from poll to poll. 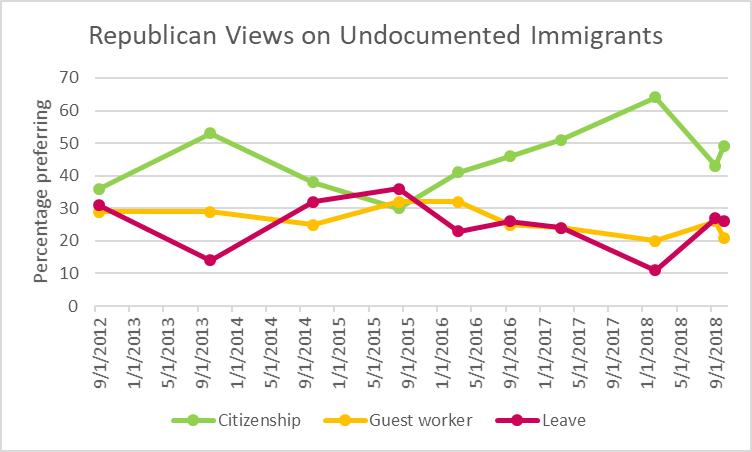 By contrast, Democrats views are much more consistent over time, as reflected in the graph below. The start the period highly favorable to letting the undocumented immigrants become citizens and grow more so over time. 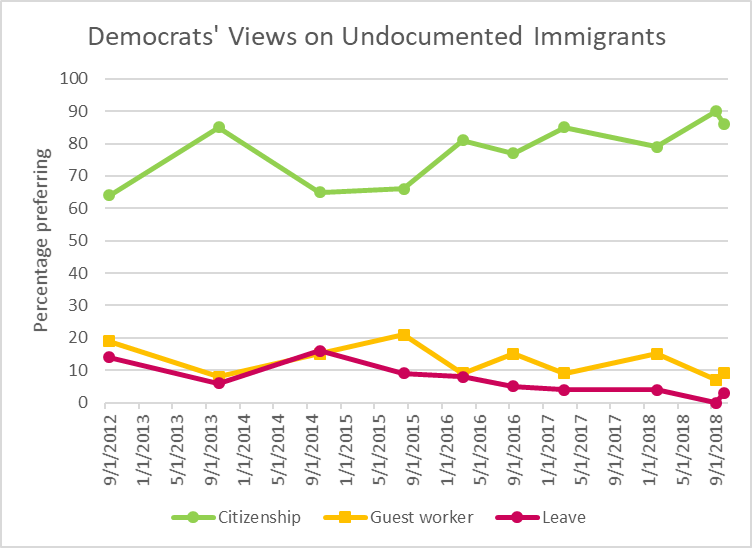 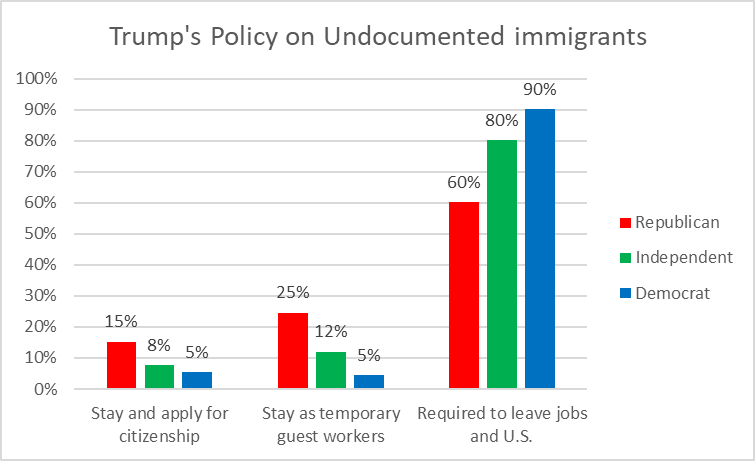 This appears to be an example of cognitive dissonance—the clash of beliefs and evidence. Republicans have shown enormous loyalty to President Trump. At the same time, it appears that many Republicans don’t agree with him on the need to expel undocumented immigrants. One way to handle this conflict is to deny the evidence. Cognitive dissonance may also account for the variability over time of Republicans’ answers. Tales of cruelty—like family separations—may compete with loyalty to the president.

In March of 2018, the poll asked what should be done with undocumented immigrants who came to the US as children. As the next graph shows, the response was overwhelming, with 80 percent of Republicans in favor of allowing them to stay and apply for citizenship. 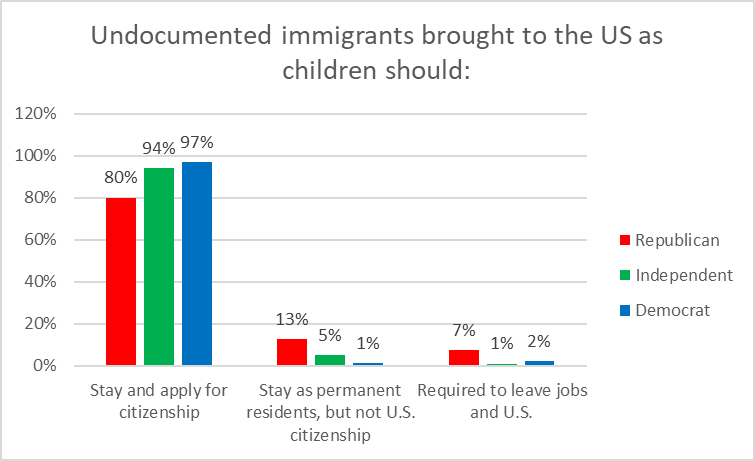 Undocumented immigrants brought to the US as children should:

The popularity of protecting immigrants brought in as children creates a quandary for the Trump administration, as the New York Times’ Linda Greenhouse points out. The administration wants to end DACA (Deferred Action for Childhood Arrivals) but doesn’t want to take responsibility for that decision. Instead it argues that the policy is illegal, and its hands are tied.

Are Wisconsin voters—including Republicans—unique in their wish to give undocumented immigrants options to leaving the US? It appears not. For example, the following graph summarizes the results of a 2018 poll the website FiveThirtyEight did using Survey Monkey. A clear majority favors allowing the immigrants to apply for legal status over being deported. 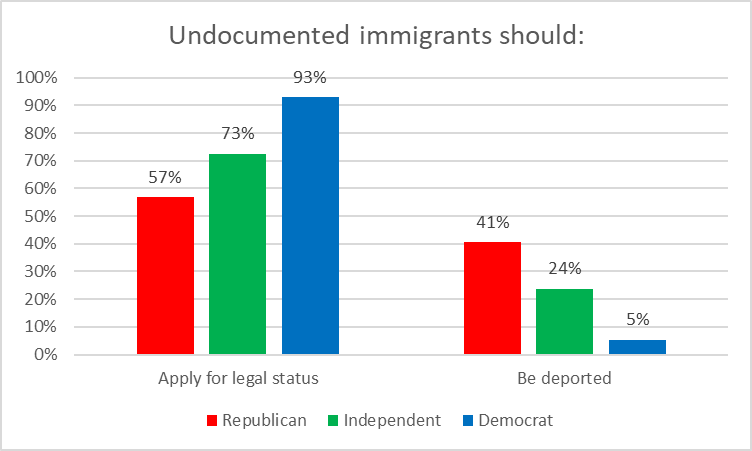 Compared to other states, Wisconsin has relatively few undocumented immigrants—an estimated 86,000 or 1.5 percent of the state’s population. This compares to 3.4 percent nationwide and 7.7 percent in California. As widely noted, with the aging of Wisconsin’s native population, as well as the state’s slow growth, these immigrants help fill critical niches. As Bruce Murphy noted in a recent article for Urban Milwaukee, the growth of immigrants, including those without papers, has been good for Milwaukee. Similarly, a Journal Sentinel article by David Haynes asking whether Wisconsin needs more immigrants ended up concluding that more immigrants would be good for Wisconsin. Likewise, a recent article in the Milwaukee Journal Sentinel reports that Wisconsin dairy farmers are dependent on immigrants.

]Yet the Trump administrations policies have left undocumented immigrants in a state of limbo that is bad for them and bad for the rest of us. Bad for them by keeping them in a state of uncertainty because they never know when they will draw the attention of ICE. Bad also because it allows unscrupulous employers to cheat them out of their legally mandated pay and benefits and other working conditions. It is inherently dangerous for society to have a population that is afraid to settle disputes through the legal system.

In June, the US House passed HR 8, the American Dream and Promise Act of 2019. It mainly aims to protect immigrants who were brought to the United States as children by giving them a path to permanent residency. It would also give protections to immigrants whose home country is dangerous. With 232 Democratic sponsors, including all three Wisconsin representatives, it has received no action in the US Senate, despite what the polls say about support among Republicans.

So far as I can tell, no legislation has been introduced dealing with undocumented immigrants who do not fall into one of these two categories. Considering what the polls say about public sentiment, the continued reluctance to propose solutions seems somewhat surprising. Even if the Senate were to relent and pass HR 8, most undocumented immigrants would still be left in limbo.

A June NPR/PBS NewsHour/Marist poll listed 20 proposals and asked people to indicate whether they were good ideas or bad ideas. The graph below shows the results for the three proposals related to undocumented immigrants.

It is puzzling, therefore, why Democrats running for President seem to ignore the first proposal while advocating for the latter two.