Council discusses how to trim annual cost of $17 million. Unfunded service for Summerfest an issue.

The Milwaukee Police Department (MPD) spends approximately $17 million every year on overtime for officers, sergeants and lieutenants. But faced with mounting budget pressure, the Milwaukee Common Council would like that number to drop.

The council’s budget, which still awaits Mayor Tom Barrett‘s vetoes, included multiple amendments that slashed funding from the overtime budget. But that doesn’t prevent the department from using overtime. As multiple council members pointed out during the budget debate, the department can spend its resources as the citizen-led Fire & Police Commission allows it and is empowered to send the city a bill should it exceed its budget.

And even if the department wanted to cut overtime, and representatives claim it does, it’s not easy, said MPD chief of staff Nick DeSiato. The council’s Public Safety & Health Committee spent over an hour on Thursday debating what could be done.

“It’s not an argument that you shouldn’t do this or you should do that,” said Alderwoman Milele A. Coggs. She said she was interested in learning more about the department’s processes and what options are available. She noted that something as simple as a software change resulted in less overtime being used in recent years.

“It’s an issue that we do take very seriously,” said DeSiato. “We do look at things like software.” But he noted that for the past five years the number has held largely steady.

“We have certain things in our overtime budget that are pretty predictable and stagnant, for instance being in court,” said DeSiato. He said that approximately 13 percent of the overtime budget has gone towards paying officers to be in court in 2019, which is similar to past years.

DeSiato said that litigators subpoena officers to appear, legally compelling them to appear as requested regardless of if they will actually testify or not.

“Has there been any discussions with the district attorney about that very fact?” asked Alderman Robert Donovan. “By God, if we could just cut $1 million to $2 million out of that expenditure that would be a savings that everyone here would benefit from.” He said he’s heard of situations where more than 10 officers are subpoenaed after an incident, including those that were present only to direct traffic.

DeSiato, a former Assistant City Attorney for the city, said it’s a three-sided debate between MPD, defense attorneys and the District Attorney’s office. “Are there efficiencies to be had? I’m sure there are,” said DeSiato. “I’m not disputing anything you’re saying, but there are going to be tensions coming from all the sides.”

The Summerfest lease, which runs through 2030, was a source of substantial debate given the council and mayor’s frustration with the soaring costs and limited payments.

MPD spent $813,000 on securing Summerfest and directing traffic in the surrounding neighborhood this year. Summerfest’s contribution to this? $134,392 plus its annual rent payment. Milwaukee World Festival, which subleases the grounds to other festivals, will pay $1,475,000 to rent the 75-acre park this year.

The public safety payment was added in 2009 as part of a lease extension, but the city now finds itself spending substantially more to keep the festival secure. Since 2011, the city’s policing costs have increased by 159 percent. By contrast, agreements with the Milwaukee Bucks and Milwaukee Brewers have the city getting reimbursed dollar-for-dollar for policing to secure Fiserv Forum and Miller Park.

“That is one contract, one opportunity that we have to cut overtime and get payment for those services. It’s those kind of things we need to be talking about,” said Coggs.

DeSiato hinted that help could be on the way. “I think it’s fair to say we’re working on that relationship and that 2018 isn’t 2008,” said DeSiato. He said he would keep the discussions private, but that the parties are meeting. “It’s a work in progress. I do want to publicly acknowledge that we’re trying to work that out.”

The discussions have come after city official complained to Urban Milwaukee about Summerfest officials blowing off a scheduled Harbor Commission meeting and also raising questions about the high pay for Summerfest CEO Don Smiley.

Multiple council members have pointed out that the lease agreement with Summerfest gives the city the discretion to provide the security it feels necessary and the city should use that as leverage.

“When those officers are down there, they’re not patrolling our streets, they’re not in our neighborhoods,” said Ald. Michael Murphy. “As our budgets get tighter and tighter, it’s harder and harder for all of us to go back to our constituents and so no I’m sorry the officers have to be down at Summerfest grounds.” Murphy and Coggs pledged not to let the issue go.

DeSiato detailed how staffing shortages can also drive overtime spending. It is still unclear how reducing the department’s sworn strength by 60 officers over the course of 2020 will impact the use of overtime, but one problem is already causing overtime spending.

DeSiato said the department is short 48 detectives at the moment. It cannot promote new detectives until a new list of candidates is formed by the Fire & Police Commission (FPC) administering a test. “When we’re short on that it has to be made up somehow,” said DeSiato. Multiple budget amendments from Ald. Nikiya Dodd added funding to expand the commission’s capacity to administer promotion tests, which she said would result in savings on overtime.

The committee also asked about police procedures and the potential for abuse. Donovan, the council’s staunch advocate for rank-and-file officers, asked if lieutenants could sign for their own overtime, boosting their pay when they wanted money for a vacation.

MPD Inspector Leslie Thiele said that an employee with equal or greater rank must sign for overtime.

Ald. Chantia Lewis, singling out the Sterling Brown incident where body camera footage showed a number of officers standing on the edge of the scene, asked what procedures are in place to keep officers away from scenes when they’re not needed.

Thiele said sergeants have direct control over that situation and DeSiato interjected to identify the Brown incident as an outlier. “That was a lot of things happening at once,” said the chief of staff. “There was also discipline issued to the sergeants for how they managed the scene.”

Lewis pushed for clarity on what department standard operating procedures (SOP) are. “I would definitely encourage for FPC to look at an SOP to handle those types of situations,” said Lewis to FPC executive director Griselda Aldrete, who was in the audience. Aldrete, coming to the table, said she would engage the community

Lewis also asked Thiele if consideration is given to avoid sending officers to complicated incidents that would create overtime near the end of their shifts. Thiele said that is done unless it’s a high priority incident.

Coggs said she will continue to push for more examination of overtime usage. “No police overtime audit has been done in over 10 years,” said the alderwoman. “I think an official way to look at best practices and what can be is an audit.”

Coggs read a report from the Legislative Reference Bureau into the record regarding overtime earnings by position. The report, included below, does not include earnings from reimbursable overtime including Miller Park and Fiserv Forum. 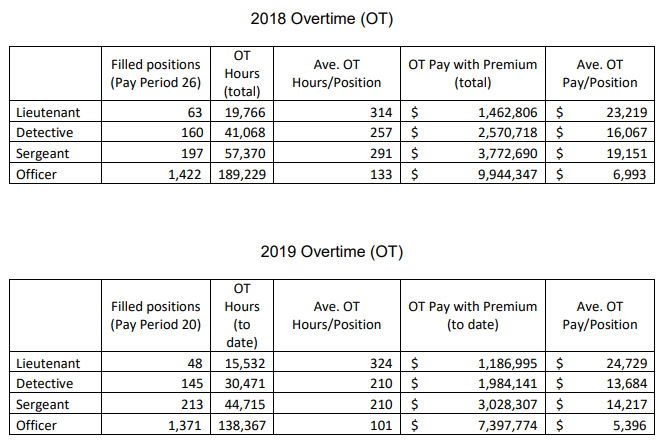