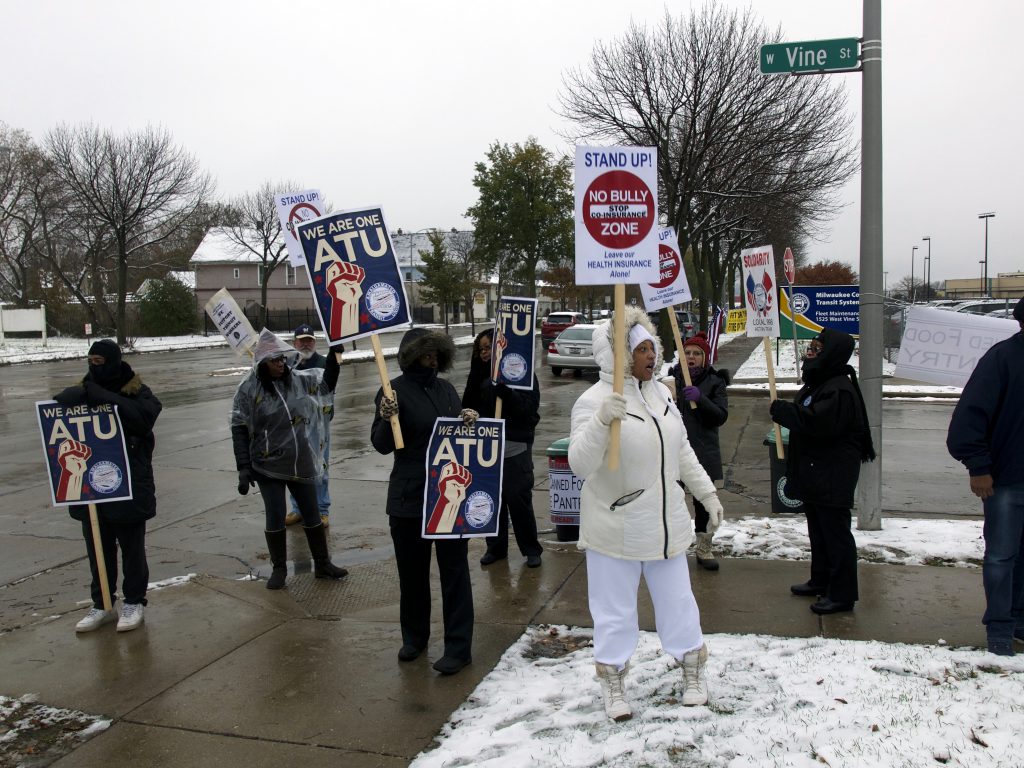 A handful of transit workers and supporters picketed outside MCTS headquarters. Photo by Graham Kilmer.

The union that represents transit workers in Milwaukee County is poised for a strike.

The Amalgamated Transit Union 998 resumed negotiations with the Milwaukee County Transit System Wednesday at 8 a.m. And by noon the union’s President James Macon told reporters that unless management changed their offer there would be a work stoppage Thursday morning. 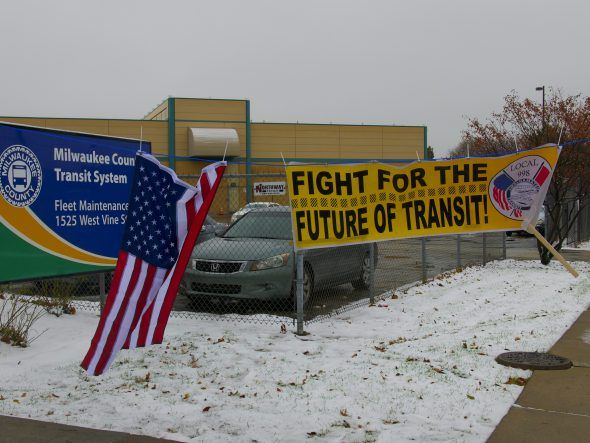 “Fight for the Future of Transit!” Photo by Graham Kilmer.

In August, the transit system gave the union their final contract offer after 18 months of negotiations. The union voted it down and also authorized their executive committee to call a strike and seemed ready to do so. In the intervening time, Macon and MCTS agreed to resume negotiations. In October, both sides told Urban Milwaukee that a dialogue had opened between the two parties. Now, with patience wearing thin on both sides of the table, the union is closer than over to calling a strike.

Macon told reporters that management had not budged on issues concerning back pay and security. He said he was willing to work until 3 a.m., when the last buses roll in, to get a contract done. If not, he said, “Again there will not be no bus service tomorrow morning.”

The normally bellicose union leader seemed subdued and somber about the choice the union faced.

In August, MCTS made major concessions from their previous contract offers on healthcare by dropping a co-insurance proposal and reducing their proposed co-pays. MCTS officials have also stated they will convene a task force on transit security in the upcoming year, which will include members of the union, to devise a plan for better security on the buses.

MCTS also gave their mechanics a significant pay raise to bring them in line with the market average. But ATU leaders saw it as a ploy to weaken union solidarity, and recently, Macon has called for a wage increase for operators that is at least half what the mechanics received.

Macon and other members of the ATU have called for getting rid of the current transit security, which they see as powerless, and replacing them with Sheriff’s Deputies on the bus.

Around noon Wednesday, a handful of transit workers and supporters picketed outside MCTS headquarters calling for management to meet their demands and accepting donations of canned goods to prepare for a strike, should it come.

A few workers told Urban Milwaukee they were tired of the nearly two-year contract negotiations and said they deserved their back pay, having kept the buses rolling all through negotiations and daily dealing with the security concerns their union leadership is bringing to management and the contract. Workers expressed a sense of irony at the fact that Milwaukee County makes no effort to enforce fare collection even as it faces problems with revenue shortfalls in the transit system.

One thought on “Transportation: Bus Drivers Ready (Again) To Strike”