By Isiah Holmes, Wisconsin Examiner - Oct 7th, 2019 10:40 am
Get a daily rundown of the top stories on Urban Milwaukee 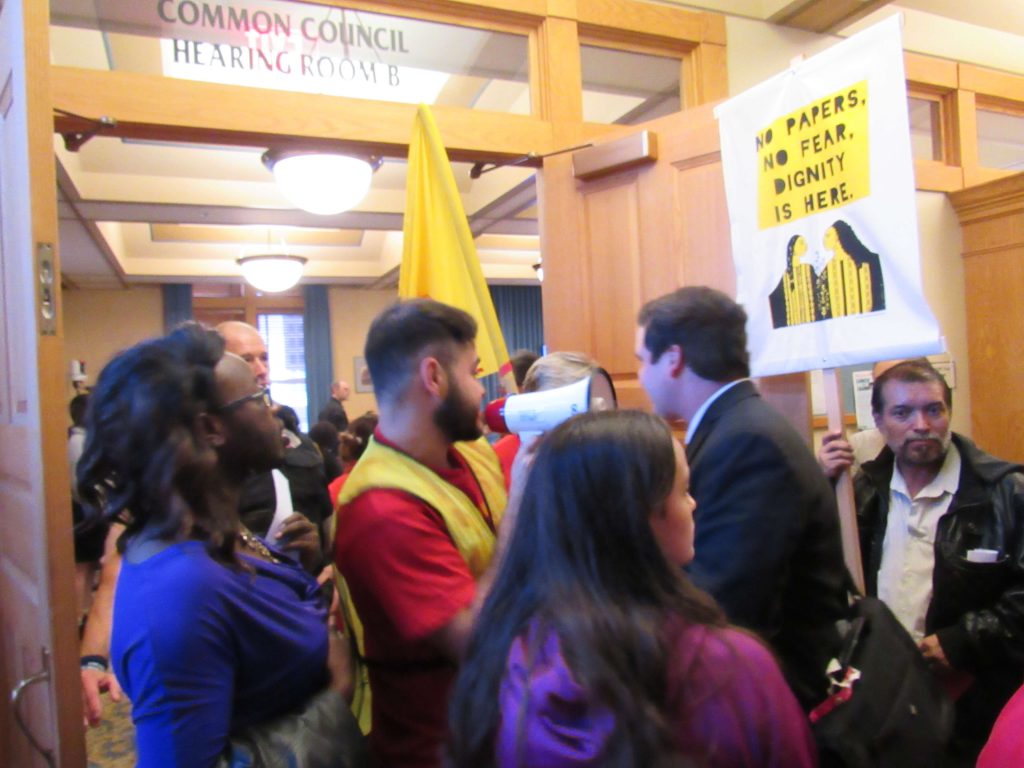 Momentum continued to build in Milwaukee as immigration activists flooded City Hall on Thursday for a third time in two consecutive weeks. Dozens of community members marched and chanted through the halls before entering a Fire and Police Commission meeting, calling on officials to protect immigrant families.

The Milwaukee Fire and Police Commission’s scheduled vote regarding the Milwaukee Police Department’s (MPD) policies relating to cooperation with  Immigration and Customs Enforcement (ICE) was canceled for a third time. Christine Neumann-Ortiz, executive director of Voces de la Frontera, said the group was “very disappointed that the policy committee was canceled.”

Sarai Melendez, an organizer with Voces de la Frontera told Wisconsin Examiner, “we’re forced to be here today, and wait for them to set a date that’s going to take another month and a half. During a time in which most people aren’t going to be engaged, which is Thanksgiving weekend.”

Neumann-Ortiz, speaking to the council, reviewed her organization’s work to create recommendations for strengthening MPD’s immigration standard operating procedure. “We have been waiting since June for a response for those recommendations,” said Neumann-Ortiz. Voces de la Frontera is calling on city officials to set a new date for next week. “The next policy committee meeting is at the end of November, and we’ve been waiting since June,” explained Neumann-Ortiz.

In that time, a man was arrested in front of his home by ICE agents, with the assistance of MPD officers. The incident engulfed the city in controversy, with the family of José Alejandro (Alex) de la Cruz-Espinoza now demanding his return.

His wife, Kristine de la Cruz, again appeared at City Hall choking back tears, pleading for change. “The things that have happened to me and my girls I don’t want to happen to another family,” she said to the council. “And I feel like you guys have the power. You guys are running our community, and I’m just asking that you consider strengthening the policy. Because there’s a lot of families that are going through this.” On an otherwise normal day, “my husband and my best friend was taken away from me. My girl’s father was taken away.”

Mrs. de la Cruz told the Wisconsin Examiner that despite attempts to contact Fire and Police Commission officials, she hasn’t heard any news. Nevertheless, says de la Cruz, since the arrest officers never seem to be far from her home. The family is currently considering legal action as a result of the trauma, and lingering questions surrounding that day. They’re particularly interested in finding the identities of the MPD officers who were filmed aiding the arrest.

“Milwaukee police have been knocking on her door to talk to her,” for unclear reasons, de la Cruz’s mother, Vickie Eskhart, told Wisconsin Examiner. “What are they doing? Intimidating her, harassing her?”

Meanwhile, immigration activists are pushing forward. “I’m moved by all the testimonies and the diversity of the groups and the individuals that are part of those groups,” says Melendez. That proves that it isn’t just an issue that affects one specific demographic.” Over 40 Milwaukee residents testified during the meeting, some of whom were immigrants from India and Africa. Many native-born Americans mentioned their own friends and loved ones, now living in fear of interacting with police officers in general due to ICE collaboration.

Although Voces de la Frontera organizer say the terms “undocumented” and “Hispanic” are becoming synonymous, other immigrant groups are also becoming very concerned. Melendez hopes Milwaukee city officials recognized the urgency of the ICE collaboration issue for the community. “They keep pushing the date back,” she told Wisconsin Examiner. “I know a lot of people, after they made their testimony, pushed them [city officials], because to them it’s an urgent matter.”

The same day of the Milwaukee rally, a committee meeting was held at the Waukesha County Sheriff’s Department to discuss its own ICE policies. It’s the only known Wisconsin police department with an on-paper ICE partnership. Similar to Milwaukee, the meetings in Waukesha were moved around and quietly announced, sometimes with little public notice.

Sen. Chris Larson (D-Milwaukee) was in attendance, and expressed concerns about the department’s policies in a statement. “I joined with colleagues at ACLU of Wisconsin to call on the Waukesha County Sheriff’s Department to end their 287 (g) agreement with ICE.” Larson criticized the policy which deputizes “local law enforcement, using our local resources, for Donald J. Trump’s deportation machine scheme.”

Larson says he has constituents who commute through Waukesha County regularly. “The Sheriff could not guarantee that a domestic violence victim who has come forward to report that crime will not be swept up into 287 (g). We must ensure that it is safe for everyone to report dangerous criminals like abusers.”

Despite calls from the community and advocates, the Waukesha County Sheriff’s Department’s immigration program will remain in place. The news makes the pushes in Milwaukee all the more pressing. “Every day we wait,” says Melendez, “is another day that a family is living in fear of separation. Another day that communities lose faith in MPD. So I hope they got the sense of urgency, and I hope they were able to sympathize with the community that they serve.”