40 Years On, Squeeze Can Still Rock

It was a love fest for the venerable British pop-rock band at the Pabst. 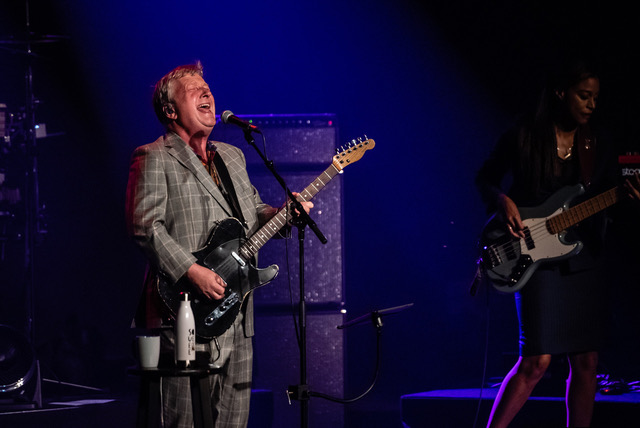 Never in my life have I had more fun at a concert than the Squeeze show at the Pabst Theater on Sunday night. It was a master class in pop-rock for the friendliest and most affable fans.

I could have said pleasurable, entertaining, amusing, exciting, jollifying, refreshing, but “fun” really fits this band.  The six musicians on stage were enjoying the show as much as the audience on this “Squeeze Songbook Tour.”

It was a big weekend to end the month of August for the Pabst concert group. On Saturday night the Riverside hosted one of the finest guitarists we have known in Mark Knopfler, long-time frontman for Dire Straits. Sunday night The Pabst presented Squeeze, a seminal band of the 1980s for purely pleasurable pop-rock.

It was actually the second incarnation of Squeeze back in 1985, where I first discovered the whimsical and light-hearted nature of their music, yet with lyrics that somehow spoke to me and understood how I was attempting to navigate young adulthood. That appreciation for me has lasted more than three decades. Squeeze’s early career was spent around Deptford in south-east London, where they were part of a lively local music scene which included Dire Straits. (It appears that birds of a feather do flock together.)

Squeeze was founded by frontman Chris Difford and Glenn Tilbrook in London over 40 years ago and earned immediate chart success in the U.K. with such well-crafted songs as “Up the Junction” and “Cool For Cats.” Inexplicably, American Top 40 programmers generally turned a deaf ear.

On Sunday, the band was introduced one-by-one as a small video screen showed each dispensing ice cream cones from a vintage truck, replete with white outfit and paper hats, similar to those worn at Kopp’s Frozen Custard. Each one of the musicians proved to be remarkably skilled, including Difford and Tilbrook on guitar, Yolanda Charles on bass, Steve Smith on percussion and backing vocals. Squeeze recently added Melvin Duffy on pedal steel guitar.

Difford once said the success of the relationship between Tilbrook and himself was staying in their respective lanes. Difford recognized Tilbrook as the more skilled musician and singer, and was content with being co-writer and partner, sharing some of the spotlight.

During Sunday’s show Tilbrook appeared as a man possessed, barely taking time for a breath while blasting through the band’s extensive catalogue of hits, including ”Pulling Mussels (from the shell),” “Annie Get Your Gun” and “Cool For Cats.”

On “Goodbye Girl,” Tilbrook and Difford featured their trademark two-part octave-apart harmony, which Difford said formed out of his own singing limitations.

Tilford led the audience with a minimalistic “Tempted” off the band’s fourth album. Tilford encouraged us to sing the chorus with him, and the enchanted audience was soon chiming in with every word.

The sold-out crowd went back and forth from sitting to standing. But most of the night was spent on their feet dancing and being part of the show. Given Squeeze’s propensity for thought-provoking but catchy lyrics, it wasn’t surprising the audience sang along with so many songs.

Early in their careers Tilford and Difford were referred to as the new Lennon and McCartney. I think in more ways they are the equivalent of Bernie Taupin and Elton John. Difford writes the lyrics and hands them off to Tilford and waits for them to come back as a song. Difford said that’s one of the most exciting parts of their process.

Tilbrook switched from guitar to ukulele for the jaunty “Cradle To The Grave.” Difford took lead vocal duties for his signature song “Cool For Cats” that also featured a killer guitar break by Tilbrook that got the audience roaring.

“It’s wonderful to see you all standing,” Tilbrook said. “Brilliant.”

Squeeze left the stage after a final track from 1980s’ Argybargy, “If I Didn’t Love You,” before returning and unleashing “Take Me I’m Yours,” “Is That Love” and “Black Coffee in Bed.”

During that last song, Tilbrook introduced each of the band members, who seemed as thrilled with the evening as Tilbrook himself. And as the audience. After four decades, 15 studio albums, 14 compilation albums, four live albums, one extended play and 48 singles, the band is still having a hell of a lot of fun.