And a hell of a singer, with a tight R&B band. “Treat Her Right” is a classic. 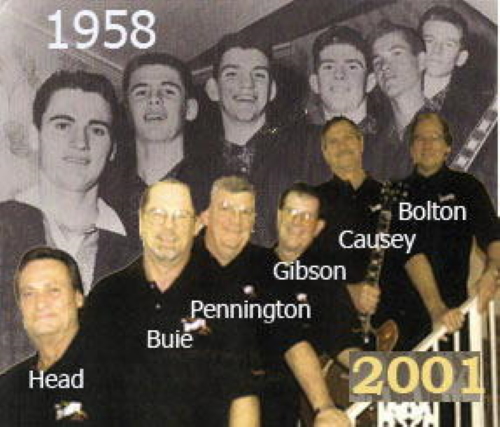 Roy Head was misnamed. He should have been called Roy Leg. A rubber-jointed white soul man from Houston, he was made possible, in part, by James Brown. Where have we heard this before? You might recall my piece on Wayne Cochran a while back. They kind of did the same thing, so before we go any further, we’re going to help you tell the difference between the two. Wayne Cochran had a platinum pompadour that rose thirteen feet over his head. Or so it seemed. Although both were handsome in an Elvis Presley kind of way, Roy stopped short of bizarre — there are no capes to be seen in the clips I viewed of him singing his greaser smash, “Treat Her Right.”

In the video, which kicks of with a strange intro from the host, which features what looks like a frat boy who drank too much hitching a ride on his back, Roy gets to work. When he’s not executing perfect James Brown moves, he has a few of his own signature moves. There’s some curious hand licking and anointing of various parts of his body. Does he have Tourette Syndrome or Autism? Is he OCD?

Not to worry though, he’s saving the good stuff for the instrumental break. He not only dives off the stage, he executes a somersault. It’s pretty damn electric. Then the thing with his leg — it’s an amazing move. He does the splits with his legs crossed. As he hits the ground, his left leg disappears under his body and you think for a moment it may have come off. Then he uses it like a spring to pop back up to his feet for another round of hot signifying, or what one commentator on Youtube called “Spaz Dancing.”

But it’s not spaz at all, it’s a gymnast in sharkskin who’s been through some serious dive bar aerobics training. And it doesn’t stop there, because Roy Head is more than just a pair of springy legs. Unlike a lot of post-MTV acts who could dance, but covered their vocals with reverb and better background singers, this guy absolutely throws down vocally. He’s got 80 grit sandpaper somewhere in his throat and phrases like the Holy Ghost is in him. When the band is vamping out he lets out a blood curdling scream that would terrify a banshee. Roy’s what you call multi-dimensional.

Head did admit to a lot of stupid behavior, but most of it involves fisticuffs. Growing up with that strange name, he found himself in many Boy-Named-Sue scenarios. His bass player, quoted in this entertaining article in The Houston Chronicle, claims he bit Elvis’s ankle! Despite all the trouble and torment over his name, he went ahead and christened his son Sundance Head.

Roy’s band, The Traits, were a super tight band from an area of Texas that spawned a lot of great music. They played R&B and Rockabilly and did a few local singles before it all came together under the guidance of legendary producer Huey Meaux.

The band was every bit as good as their frontman. Listen to this version of Dexter Gordon’s “Just A Little Bit.” It’s It’s so on the money it’ll make you want to go out and bite somebody’s ankle.

Roy and his band didn’t last long. The reasons, cited in that article, were his bad business decisions and the band’s unwillingness to travel. I’m a little ticked we didn’t get more from them. Had they stuck it out, there’s no doubt in my mind they’d be in the Hall Of Fame. Of course things can happen to a guy who does somersaults off the stage and bends his poor skinny legs into impossible positions on a nightly basis. The NFL might have been a better career for someone interested in longevity than that of a soul contortionist. But unlike others with aching knees and hips like Prince, Michael Jackson and James Brown, Roy is still here, dodging snakes and setting hog traps down in Texas, still ready for a little trouble, should it come his way.

Treat Her Right was the opening song in Quentin Tarrentino’s latest film, Once Upon A Time… In Hollywood. Thanks to Dennis Darmek and Pat Tully for suggesting it.