By Amanda Parrish, Milwaukee Neighborhood News Service - Aug 9th, 2019 11:26 am
Get a daily rundown of the top stories on Urban Milwaukee 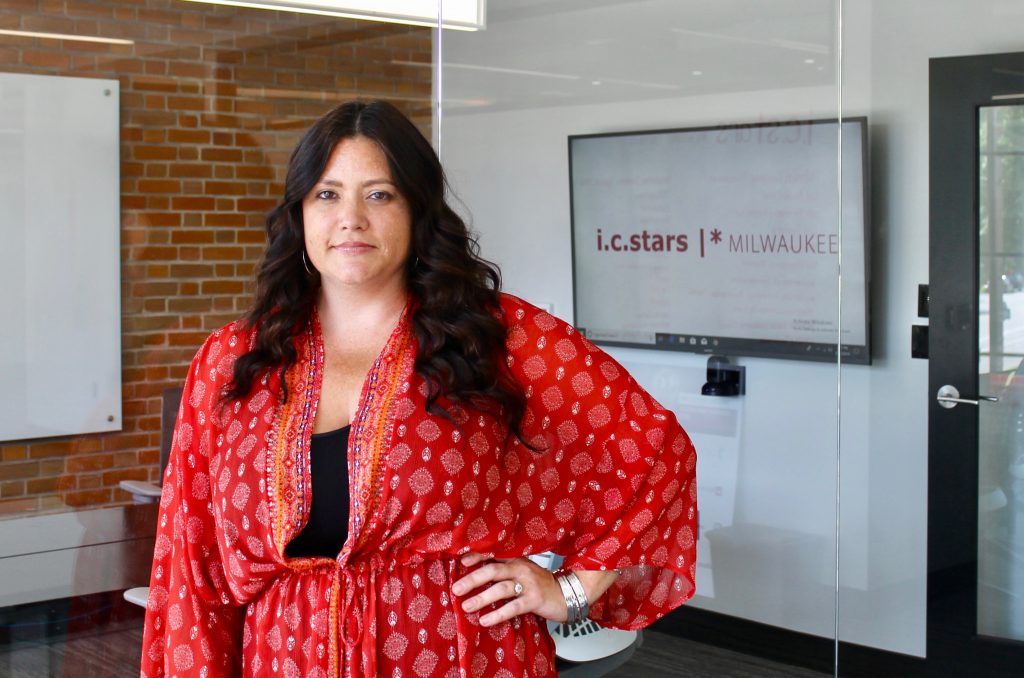 Sarah Dollhausen, general manager, said i.c.stars focuses on equal access and opportunity. “It’s important that for companies to compete at a global level, part of your business strategy should be having a diverse workforce because it brings in different perspectives. It helps with problem-solving,” she says. Photo by Amanda Parrish/NNS.

Carlos Vasquez found his passion for coding while working in a factory.

He listened to audiobooks about software development and heard from those who work in technology. Soon his interest was piqued, and Vasquez eventually came across an internship opportunity at i.c.stars.

Created in 1998 in Chicago, i.c.stars is a four-month internship program focused on improving the community by providing those who come from a low-income background with training to prepare them for a job in technology. Such jobs include data analysis, product management or web development.

Employment in computer and information technology jobs is projected to increase nationally 13 percent from 2016 to 2026, creating 557,100 new jobs, according to the federal Bureau of Labor Statistics.

Vasquez became a part of i.c.stars Milwaukee in the first cycle of interns, and now, at 23, is developing his own web application, Habla Code, to help Spanish-speaking coders.

“I searched coding tutorials in Spanish, and they were all outdated, and there were no companies in the United States doing work to put the word out there that technology is not just English,” he said.

The web application began as a prototype he created for his capstone project. Vasquez translates samples, descriptions and explanations of coding languages, including HTML and JavaScript, into Spanish for users to utilize. He also hopes to create instructional videos. The official website is not yet complete, but his prototype is accessible online.

Every four months, 20 interns like Vasquez participate in an intense program at the i.c.stars office on the second floor of 200 N. Jefferson St. Interns, who receive a weekly stipend of $150, attend the project-based program from 8 a.m. to 8 p.m. Monday through Friday. They develop skills in technology, leadership and business.

Interns must be 18 or older, have a high school diploma or GED, have six months of prior full-time work experience and qualify as low-income. They must also commit to an “On Time, No Absence” policy.

Applications are accepted on a rolling basis. The next cycle runs from Aug. 12 through Dec. 5.

In addition to technology training, i.c.stars holds workshops focused on business and leadership that teach intern skills such as how to deliver effective presentations, how to network, the importance of financial responsibility and the need for emotional intelligence.

“These skills, it sounds cliché, but they are the future,” he said. “As long as you have that tinkering mindset you are going to be just fine.”

Once the internship is complete, the trainees are provided with an additional 20 months of support in which they get assistance with networking and career services.

Participants work with Leia Ferrari, talent placement manager, to find employment. Interns have been placed at such companies as Northwestern Mutual, Footlocker and The Dohmen Co., which helps fund the Milwaukee branch.

Ferrari said there is an 80% placement success for interns.

“We would like to see the Milwaukee professional workforce look more like the population of Milwaukee,” she said. “The reason i.c.stars opened its doors in Milwaukee was to bring positive change to the Milwaukee business community.”

“It’s important that for companies to compete at a global level, part of your business strategy should be having a diverse workforce because it brings in different perspectives. It helps with problem-solving,” she said.

Rosa Fowlkes, recruitment manager, said she often sees a transformation in each intern.

She said Vasquez is a good example of this. Before the internship, Fowlkes said, Vasquez was very skeptical and introverted.

“I learned a lot of social skills, networking skills, presentations skills, just being comfortable with being uncomfortable, which is one of the coolest things I did,” Vasquez said.

Before the program, many interns work jobs that pay at or near minimum wage. With the skills they learn through i.c.stars, they now qualify for higher-paying jobs.

Ferrari said this has allowed interns to live on their own, purchase a second car, expand side businesses and have more overall stability.

Internship application deadline is coming up

Applications are accepted on a rolling basis. The next cycle runs from Aug. 12 through Dec. 5. Those interested are encouraged to apply ASAP.