Public Shocked by ‘For Sale’ Signs in County Parks 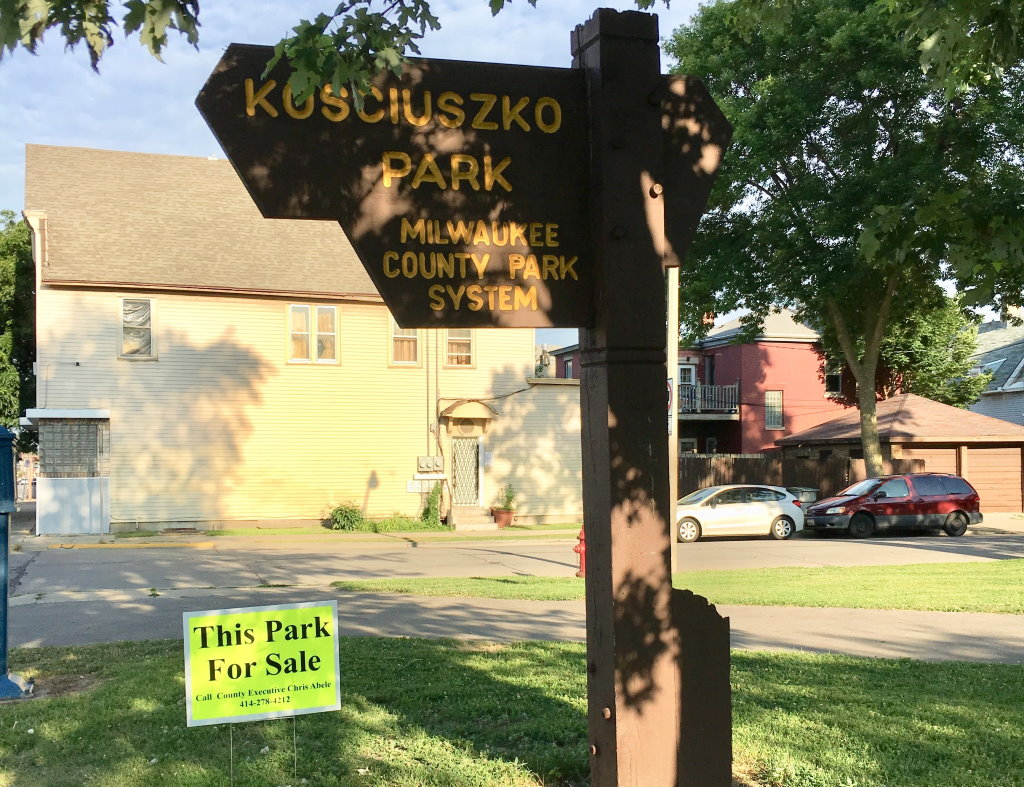 Signs like this one were place in parks all across Milwaukee County. Photo courtesy of Preserve our Parks.

A local advocacy group is gravely concerned about the future of Milwaukee County Parks, so, hoping to galvanize support, they decided to shock some of the public into awareness this past weekend.

A recent report by the non-partisan Wisconsin Policy Forum spelled out the dire situation Milwaukee County faces with its massive backlog of capital projects. The report warns that the county desperately needs new revenue, the best case scenario being an increase in the sales tax. And without new revenue the cost to maintain infrastructure will quickly outpace the county’s ability to pay. And if this happens, facilities may need to be closed or sold off.

Preserve Our Parks, a longtime advocate for the public park system, was horrified by the report. So they peppered the parks this past weekend with 300 signs that said ‘This Park For Sale’, hoping to drum up awareness.

“We found the mere suggestion of selling off parkland to be outrageous,” said Patricia Jursik, a Preserve Our Parks board member and former County Supervisor.

Jursik and her fellow advocates want the public to share in their outrage, if it isn’t already. The Milwaukee County Parks Department managed to remove the signs just about as fast as they were planted.

Jursik said the photos of the signs message reached a significant amount of people in person, but most of the reach was on social media. And, “Without exception, people were shocked by the signs.”

Preserve Our Parks has fervently stood for maintaining parks as a public good. And in recent years as the gloomy fiscal picture of Milwaukee County became clearer, they’ve focused their advocacy on dedicated funding for the parks.

County spending on parks is discretionary, this is why the Wisconsin Policy Forum report identified cultural facilities and parkland as potential assets that could be closed or downsized if the county needed to. Much of Milwaukee County’s revenue is used to fund mandated services, and maintain their infrastructure. This has led to a massive backlog of parks capital projects and deferred maintenance.

“Ultimately, if Milwaukee County can’t fund our parks infrastructure needs, then we must start now to determine another way to provide our parks with a stable, secure and sustainable funding source,” said Preserve Our Parks President Jim Goulee in a press release.

The Milwaukee County Parks System is a resource held precious by local residents and elected officials alike. And the county board has not suggested, or intimated, any plans to begin selling parkland. But that does little to mute the concerns of the Preserve Our Parks people.

In Milwaukee County, due to changes in state statutes under Act 55, County Executive Chris Abele has the power to sell county land not currently zoned as a park without board approval. Though, he would just need approval from a real estate professional appointed by the Milwaukee County Intergovernmental Cooperation Council or the county comptroller. Local municipalities have control over zoning, the board doesn’t. So, Jursik said, Preserve Our Parks is worried local municipalities might rezone parkland so that it can be sold to developers, to add to their tax rolls.

“Let me be clear: we have no plans to sell Milwaukee County parks,” Abele said in a statement, ” That said, as a result of a decade-long funding imbalance with the state, our ability to maintain facilities, preserve community assets and provide high-quality services at the level our residents deserve is approaching the breaking point.”

The county has an average structural deficit for operations that is $12.8 million annually, but will face a structural deficit of nearly $80 million by 2023, and has a massive projected backlog of capital projects, while its annual state shared revenue has been stagnant or declining. Abele said Milwaukee county needs more support from the state or new tools to deal with this reality.

“It is time to stop kicking the can down the road, and find a long-term funding solution that charts a new course for our future.”