By Robin Bravender, Wisconsin Examiner - Aug 3rd, 2019 01:15 pm
Get a daily rundown of the top stories on Urban Milwaukee 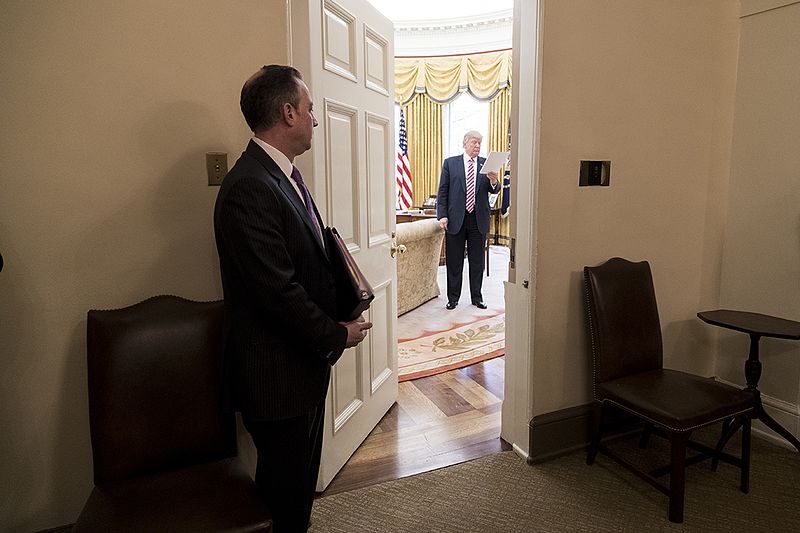 Chief of Staff Reince Priebus looks into the Oval Office as President Donald Trump reads over his notes, Friday, March 10, 2017, prior to meeting with key House Committee Chairmen at the White House. Official White House Photo by Shealah Craighead.

Scott Walker had just won the governorship as Republicans flipped the state Senate and Assembly. Paul Ryan was ascendant in the U.S. House, taking the gavel of the powerful Budget Committee after Republicans seized control of that chamber. Reince Priebus, who had been chairman of the Wisconsin Republican Party, ousted his former boss to take the helm of the Republican National Committee.

The Washington Post’s politics guru Dan Balz penned an article in February 2011 with the headline, “A young Wisconsin trio could shape the direction of the GOP.”

Indeed, they were triumphant for a time.

Scott Walker. Photo from the State of Wisconsin.

Walker survived a bitter recall election and went on to win a second-term. He was even considered an early front-runner before dropping out of the 2016 GOP presidential primary. Ryan was the vice presidential nominee in 2012 before he became speaker of the U.S. House. Priebus even made it into the West Wing, serving as President Trump’s first chief of staff.

“We used to joke around that for Wisconsin never being on the map, all of a sudden we were on the six o’clock network or cable news for something,” said Madison-based Republican strategist Brandon Scholz. He called the Republican’s rise a “prideful moment” for the state GOP.

But the Wisconsin trio’s run at guiding the GOP in the national spotlight is over — at least for now.

They’ve all resigned or been booted from their high-profile government posts, moves that political observers attribute to Trump to varying degrees. For now at least, their absence from state politics creates a void to be filled by either a new generation of Republicans or — as Democrats hope — by leaders on the left.

Ryan agreed in an interview with Politico earlier this year. “Trumpism is a moment, a populist moment we’re in, that’s going to be here after Trump is gone. And that’s something that we’re going to have to learn how to deal with,” Ryan said. “I’m a traditional conservative, and traditional conservatives are definitely not ascendant in the party right now.”

Kyle Kondik, managing editor of Sabato’s Crystal Ball at the University of Virginia Center for Politics, said the turnover in Wisconsin politics is likely broader than Trumpism.

Political parties “almost always pays a price for holding the White House,” he said, particularly if the president is unpopular. He noted that Walker may not have lost his seat in 2018 if Hillary Clinton had won the White House, and that Ryan might still be speaker of the House.

“So much of what happens in American politics is a reaction to the White House,” Kondik said. “It makes or breaks careers.”

Where are they now?

For now, the Wisconsin GOP trio is staying largely out of the national spotlight. But they are doing significant political work behind the scenes.

“Every American has the right to peaceably align themselves with a political party (or not), speak into the political process, and petition their government,” Walker said in a statement released by his group, the National Republican Redistricting Trust, supporting 15 people, including Republican officials, who want to participate in drawing Michigan’s voting districts.

Speaking to the foundation’s annual conference this week, he lamented the number of young people in the United States who say that socialism is acceptable, and he urged the young conservatives in the crowd to try to win over converts on college campuses.

Walker told the Milwaukee Journal-Sentinel that working for the group, which is based in northern Virginia, would preclude him from running for governor or senator in Wisconsin in 2022.

Since his loss to Gov. Tony Evers last fall, Walker has also been working on a campaign to push for a U.S. constitutional convention to balance the federal budget. 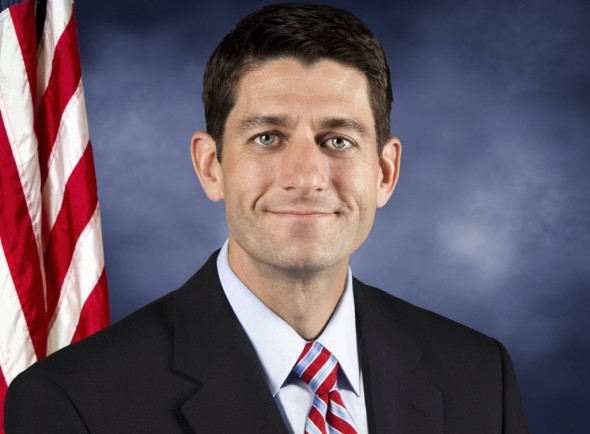 Ryan, meanwhile, left the House speakership and his 1st District seat back in January. He kept a relatively low profile until he catapulted back into the headlines (and into Trump’s Twitter feed) this month with the release of a new book detailing Trump’s rise to power.

In the book, “American Carnage,” Ryan is quoted skewering the president, saying among other things, Trump “didn’t know anything about government,” and “Those of us around him really helped to stop him from making bad decisions. All the time.”

The president lashed out on Twitter, calling Ryan “a long running lame duck failure” who left “his Party in the lurch both as a fundraiser & leader.”

Ryan has said he doesn’t expect to ever run for office again. He’ll join the University of Notre Dame as a guest lecturer in political science and economics during the upcoming academic year, the university announced in April.

And while he may have distanced himself from Trump since leaving Congress, he is now serving on the board of Fox Corp., which oversees Trump’s favorite media outlet, Fox News.

Priebus remained in Washington after being pushed out of the White House following a tumultuous six-month tenure at the start of the Trump administration. He’s president and chief strategist for Michael Best & Friedrich LLP, a law firm whose headquarters are in Milwaukee, and which played a major role in the 2010 redistricting of Wisconsin, creating what a federal court called the most gerrymandered map in the nation. The law firm’s website notes that Priebus serves as chairman of the firm’s government relations and public affairs practice. “Reince created the framework for one of the most historic election cycles Wisconsin has ever experienced,” the firm notes, “winning races in Wisconsin in a historic pace.”

Political observers aren’t ruling out big comebacks from Walker, Ryan or Priebus. That could potentially include a 2022 gubernatorial run, a U.S. Senate bid that same year if Sen. Ron Johnson steps down, or a presidential campaign in 2024.

“Never say never,” said Zepecki. “All three of them have had their names on the ballot in the state of Wisconsin and I think we are kidding ourselves if we think we have seen the last of all three of them.”

Walker could take another shot at the White House, and his new gig with the youth organization will allow him to network with conservatives around the country and with GOP donors. The Milwaukee-based Lynde and Harry Bradley Foundation, which has close ties to Walker, gave $561,500 to the Young America’s Foundation between 2002 and 2015.

Priebus, who lost his bid for a Wisconsin state Senate seat in 2004, has suggested that he might eventually run for office again.

“Maybe one day,” he told Politico last year. “I think now I’ve got to concentrate on my career, building a retirement,” he added. “One day, when, I think, I take care of that side of my life, perhaps, I would love to be back involved.”

Ryan is seen as the most likely presidential contender of the three, possibly as early as 2024.

“I can certainly imagine Ryan trying to run for president someday,” Kondik said.

The former House speaker “can do anything he wants to do,” said Scholz.

One thought on “The Rise and Fall of Three GOP Stars”