Why the Weekend of Fatal Overdoses?

By Isiah Holmes, Wisconsin Examiner - Jul 31st, 2019 12:28 pm
Get a daily rundown of the top stories on Urban Milwaukee 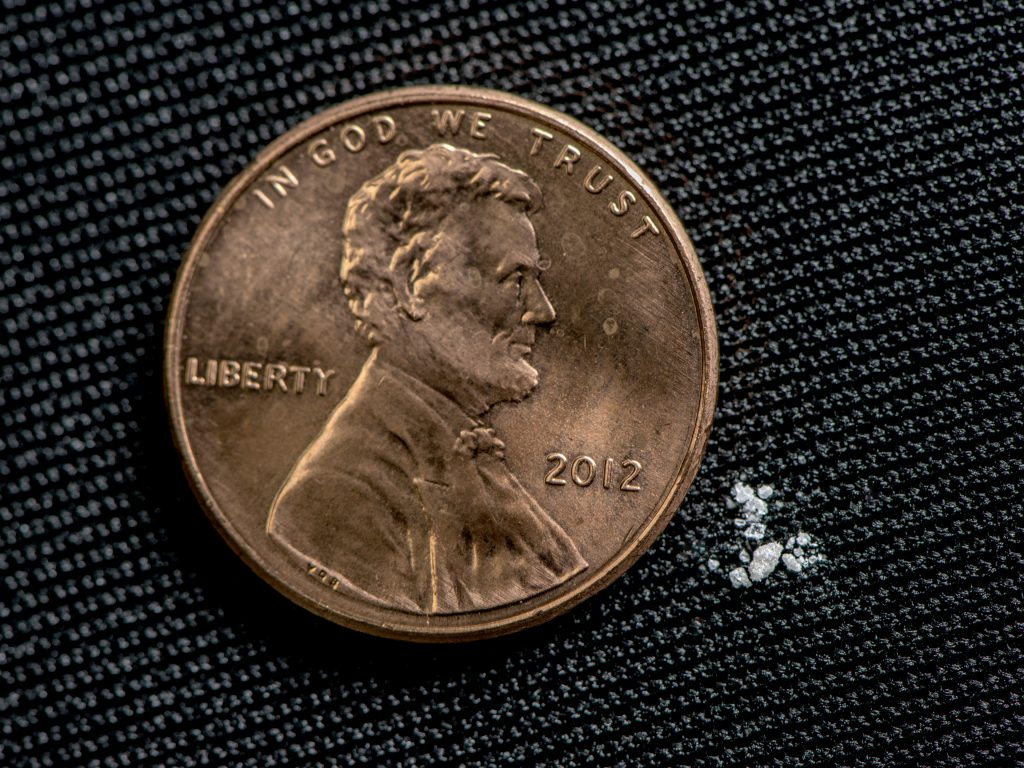 2 mg of Fentanyl (compared to a size of a penny). A lethal dose in most people. Photo from the Drug Enforcement Administration.

Over the weekend, 14 fatal overdoses occurred in Milwaukee County, with the Medical Examiner’s office responding to three in just under an hour on Sunday.

Although toxicology is still pending for many of the dead, some information is known. They were mostly older than 30, including a 64-year-old woman who died on Saturday, apparently after consuming all but one of the 115 Oxycodone pills she had been prescribed three days before her death, according to the Milwaukee Journal Sentinel. A  21-year-old man who was depressed, according to his mother, was found with drug paraphernalia and a Suboxone wrapper.

Suboxone, called “Subs” on the street, is a medication used to treat heroin and opioid addiction. It’s similar to methadone, another medication which reduces withdrawal symptoms and cravings for heroin users and produces a very mild high. Both medications, sometimes known as maintenance drugs, can lead to abuse and dependence.

Two other people who died were a 36-year-old boyfriend and 47-year-old girlfriend who were found by their 14-year-old son in a Residence Inn near downtown Milwaukee. Although toxicology is still pending, the pair were found with an “unknown white powder,” according to investigative reports obtained by Milwaukee Journal Sentinel. Separately, a 58-year-old woman who died at Columbia St. Mary’s Hospital tested positive for cocaine, fentanyl and opiates.

The rash of deaths this weekend suggests the possibility of a batch of drugs laced with a toxic quantity of fentanyl, but that hasn’t been proven, says Michelle Jaskulksi, a board member of Milwaukee Heroin Diaries and director of Addiction Policy Forum of Wisconsin.

“Since the Medical Examiner’s office hasn’t conducted their investigations, it’s hard to say whether the deaths over the weekend were related or a result of a ‘bad batch,’ although it certainly seems possible,” Jaskulski said.

Fentanyl started out as a pain medication for terminally ill patients, and is 50 to 100 times more powerful than heroin. Numerous investigations in the U.S. and Canada, however, suggest that the fentanyl fueling the overdose crisis is coming from the Chinese black market. “With the proliferation of fentanyl being added to not only heroin but potentially other drugs as well, the danger is amplified,” Jaskulski told Wisconsin Examiner.

Karen Domagalski, operations director of the Milwaukee Medical Examiner’s office, called the weekend death cluster “a very unusual spike.” “We are performing toxicology testing and should have some answers in a few weeks,” she told Wisconsin Examiner. If current trends continue, Domagalski warned, 2019 might be a record-breaking year for overdose deaths in Milwaukee County.

Jaskulski says education and reducing stigma is crucial to addressing the overdose crisis. “The best thing we can do is continue to educate the community in order to reduce the stigma around addiction,” she said, “as well as raising awareness about the resources available [so people can] reach out for help.”